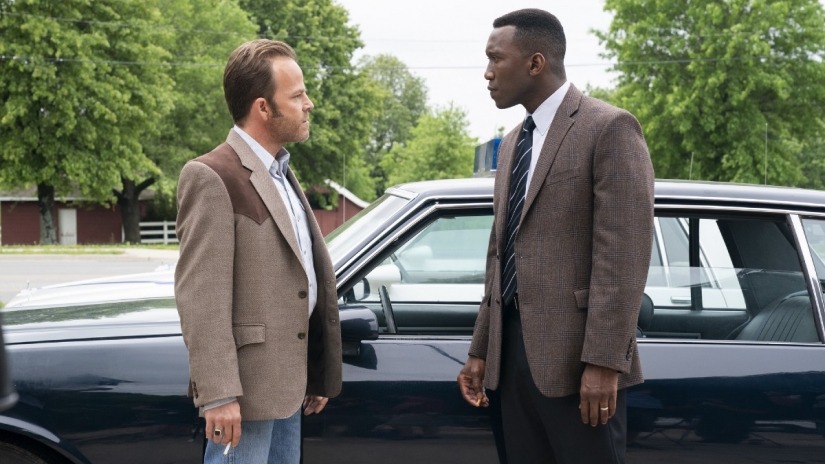 There is only one episode left in season three of True Detective, and I think, at last, I may understand the mania that compels Wayne Hays. He is seeing the Purcell case through, not because he wants to or takes any real pleasure in it at this point, but because he needs to see how it ends. This is the general anticipation I feel building up to every new episode of True Detective. I am not sure I am enjoying the show. I’m not sure it’s any good. But I need to see how it ends.

But we are, at least, getting somewhere, and certain threads that had been left to hang finally are picked up again. The one-eyed man who West and Hays had been told bought the dolls that the Purcell children received on Halloween and that were found in the woods near Will’s body finally resurfaces at Amelia’s book reading, clearly looking for Julie. Amelia tells Wayne, and he and West discover that he worked in Isabel Hoyt’s house. Hoyt is important, with connections in the police department, and, importantly, his family has been relatively wrought with tragedy.

Hays and West believe Detective Harris has some information, and they take him to a barn for some good, ol’ fashioned interrogation, and by interrogation I of course mean pistol-whipping. They beat the snot out of him, but he eventually talks his way out of his cuffs and goes to attack Hays. West shoots and kills him, and finally we know what broke the partners up. West felt like Hays manipulated him by invoking the memory of the recently deceased Tom Purcell (more on that in a moment) to get him to come go along with the grilling of Harris. Hays points out, correctly, that West has free will and made the decision to come along. It’s a fracture that we know the former partners will carry with them well into the future, nurtured and bloomed under the insult to injury reality that the only lead they believed they may have had in an impossible case was now dead, and the case was once again “closed,” based on the assumption of guilt of a dead man, in this case, Tom Purcell.

Tom’s body is found on a water tower at the top of the episode, next to a typed suicide note, which should undoubtedly be the first indicator of fraudulence – who in the world types a suicide note? He is a convenient patsy, though, and his note saying that he’s sorry is conclusion enough for a community and police force that desperately wants the case to be resolved and over. It is not enough, and perhaps would have continued to not be enough, for Hays, were it not for a politely menacing phone call from Mr. Hoyt himself. He’s aware of what happened to Harris, and he is very comfortable delivering cloaked threats to Hays and his family. And that catches us up on that timeline.

Meanwhile and in the present tense, older Hays convinces the documentarian to tell him what her theory of the crime is: a child trafficking ring. To be fair, I suspect that is the conclusion that most of the audience has already come to – all of the evidence points in that direction. Lucy Purcell sold her children – or at least her child – and there is a vast cabal of conspiracy in the town to cover up the whole racket.

There is one final, seemingly relevant, piece of new information we receive this episode, and that is in the first glimpse we get of Hays’s estranged daughter, Becca, as an adult. We know that they have some kind of falling out, but though we have seen his son as an adult, prior to this, Becca has served as an absence. We see Hays taking her to college – Amelia is pregnably absent. And though we get little information beyond that, we know now that at least up until she began college, Becca and Hays were on good terms.

This far into the season, it is satisfying to have one mystery resolved – the inciting event for the rift between Hays and West has a solid enough solution and one that ties well into the central knot of the season. So many remain, however, going into the final episode.

There Is a Lot Still to Conclude

I am left again trying to assess the actual merits of the show. The acting is, as always, top-notch. The structure and plot feel circular in a way that can make a viewer feel as if they’re standing still, and while it’s frustrating, I am also aware that that may be the intention. It is as near as we can be to sharing the mindset of Wayne Hays. In that respect, it is sort of brilliant. There remain narrative decisions I can’t make heads or tails of. In this episode, we see Amelia – a woman who has written a comprehensive true crime book about a child who went missing and one who was murdered – take her own children with her to a bar for an interview and leave them locked in the car outside alone. This would be an absolutely incomprehensible decision. A more intriguing decision, however, is revealing that Hays initially was a willing participant in Amelia’s book. His later resentment and the barbs he directs at her because of the book take on a new dimension, in light of his own complicity in the writing of the book.

The full success of this season as a whole could rest entirely on next week’s finale. There has been such an even ratio of good to bad this season that my optimism is tempered. But like Hays, I’m still holding out hope for some satisfaction.

By Episode 2, ‘The Umbrella Academy’ Already Knows Exactly What Show It Is