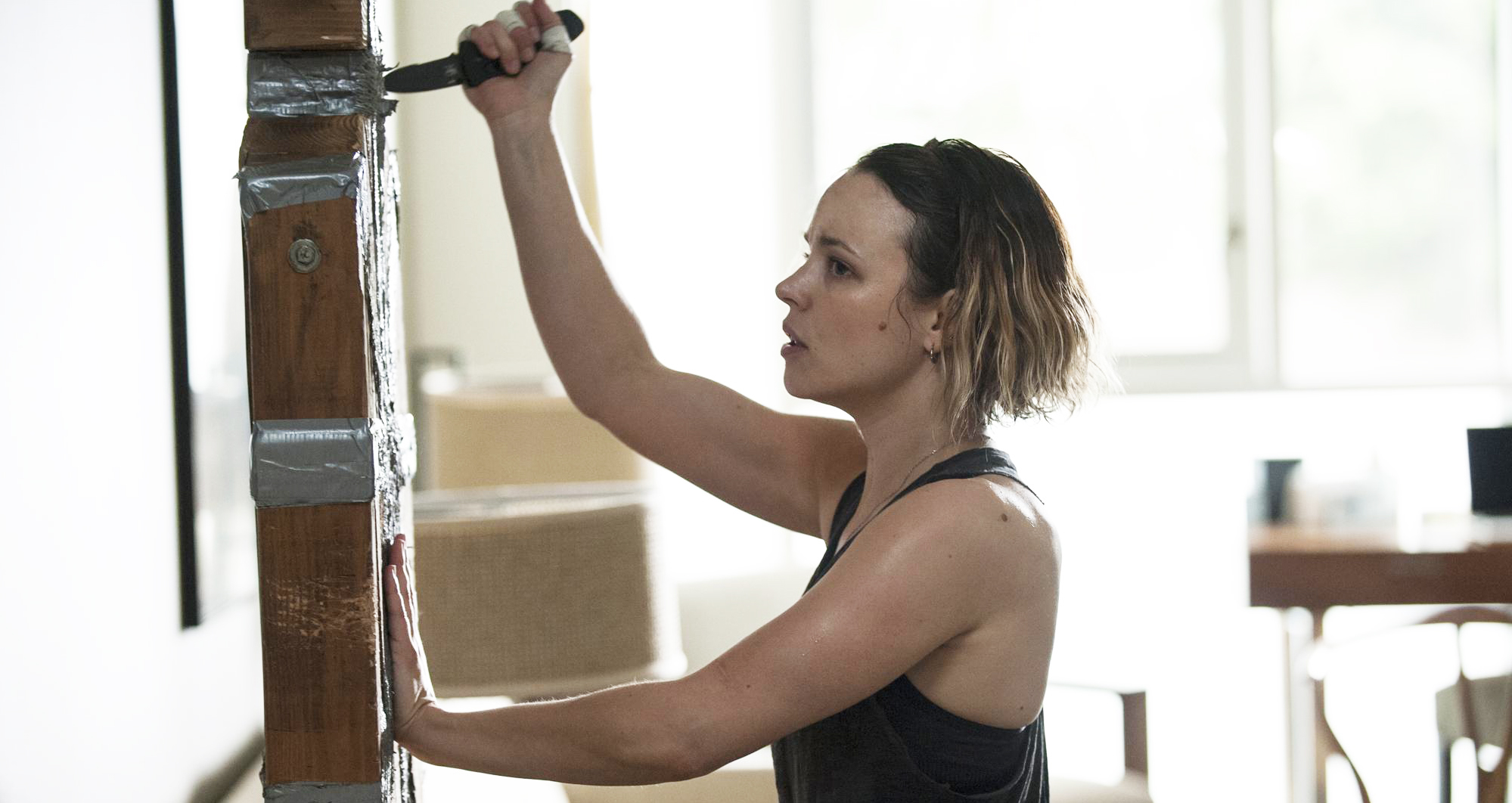 Season one of True Detective revealed the killer to be a minor character nobody was really expecting. I’m starting to get the vibe that this season will see a big player be the guilty party. This week’s episode began to show signs that we are moving toward a conclusion. There are clues galore as we finally got to witness one of those much talked about “hooker parties.” Plus we get a Friends shout out and some creative use of a nail gun. What more could we really ask for? Here’s our recap of “Church in Ruins.”

Showdown at the Breakfast Table

The opening scene of this episode has Velcoro and Frank sitting at Frank’s table with their guns drawn. It was a tense stare down. Yet as Velcoro requests black coffee all I could think of was this exchange from the classic art house film, Pitch Perfect. Beca: “Tell me, what does Judd Nelson eat for breakfast?” Jesse: “Oh, well, like all misunderstood rebels, he feeds on hypocrisy.” Beca: “Sure.” Jesse: “And black coffee, to help with his morning dumps.”

You may call that quote off topic. I call it perfectly appropriate to describe Ray Velcoro. The stare down has Frank claiming he didn’t know he led Velcoro to murder the wrong man years ago. He was told the name he provided was actually the one who raped Velcoro’s ex. One of Frank’s guys provided the name to him. So the two strike a deal. If Velcoro can find Caspere’s missing hard drive for Frank, Frank will sell out the one who gave the false name to Velcoro. After the conversation is defused, we see that Jordan is in the next room with a gun ready. So that scene really could have turned bloody quickly. Velcoro goes on to visit the man recently arrested in connection to his ex’s rape. He threatens him a bunch and tries to get a sense for his guilt. He leaves there thinking this is, in fact, the right guy.

Up at the torture shack Bezzerides and Woodrugh discovered at the end of last week’s episode, some cops and a forensics team have arrived. We learn that the blood all over the place is from a female, but that’s the only useful information they can find. So this was not the scene of Caspere’s murder. Could it be the missing woman, Vera? Woodrugh moves on from that scene to look more into the missing blue diamonds. He discovers that they are very rare (duh) and that they were originally stolen during the Los Angeles riots in 1992. Following up with a police officer that worked the case, it turns out that they weren’t just taken by looters. Robbers who wore masks executed the two jewelry store owners. We don’t find out what kind of masks. That seems like an important detail on this show. The two young children of the jewelers witnessed the ordeal while hiding nearby. The case was never solved and the kids were put into the foster system.

The Art of the Nail Gun

Remember Frank’s guy, Stan, who was found dead recently? It seemed like a footnote at the time, but the death keeps coming up in each episode. This week Frank and Jordan visit Stan’s widow with an envelope full of money. She reveals that Blake stopped by right after Stan’s death to ask if he had told her anything. Hmm, that is very suspicious. Frank also speaks to Stan’s son and gives him an inspiring speech about becoming a better person through tragedy. See, Frank isn’t so bad. He even comes out looking like a good guy in the next scene where he’s nail gunning a man for information on Irina, the woman who pawned Caspere’s belongings before the Vinci massacre. Sure, he’s torturing the dude, but he’s nice about it. Frank learns about a house where he might be able to find Irina. When he arrives, she’s not there. The two guys who visited Frank at the club last week are though. So, as Frank says, he has a Mexican standoff with actual Mexicans. Then Frank makes yet another deal. He’ll let the guys sell drugs in his clubs a few nights a week in exchange for seeing Irina.

Soon after that, she gives him a call. She says a thin white cop, who didn’t wear a uniform, paid her to pawn that stuff. The character that popped into my mind was Lieutenant Burris from Vinci. Dead Detective Dixon seems like he was the right amount of corrupt for this, but he likely wouldn’t have been described as “thin.” Either way, I’m just speculating. Frank convinces Irina to meet with him. When he shows up, the Mexicans he recently made the deal with have already killed her. They say it’s because she admitted to working with that cop. But they insist since Frank has now seen her, the deal to sell in his clubs will still go through. We’ll have to see how this power struggle plays out next week.

Velcoro’s story arc with his son isn’t going particularly well. They have a supervised visit at Velcoro’s house. But the son doesn’t want to work on a model. He wants to eat pizza and watch Friends. Is this a veiled insult or compliment of Friends? All we know is Ray sure doesn’t have time for 90s sitcoms. He tells his son that no matter what anyone tells him, he is his father and he loves him. But frankly, the kid doesn’t really care. After the kid leaves, Ray blasts some tunes, snorts some cocaine and gets a bit crazy. He shadow boxes around his house, lets out a good cry and then smashes all of his models. At this moment, I though his bad decision mustache would instantly grow back, but sadly it doesn’t. He gives his wife a call and tells her that he will go away forever if she doesn’t tell the son the results of the paternity test. At this point, I have a feeling the results may show that Velcoro is the father. But everyone seems quite sure the rapist is.

As exciting as all of this has been, the real highlight of the episode has Bezzerides infiltrating one of the mysterious hooker parties. Her sister stops by to give her the details, but the detective can’t turn away from knife training. She’s pretty good at slicing up a target. Later, Bezzerides, Velcoro, and Woodrugh gather to make a plan. The latter two will tail the bus full of prostitutes and spy on the party. Woodrugh asks Bezzerides to try not to stab anyone. Spoiler alert: she fails. Blake screens the hookers as they get on the party bus. As soon as they arrive at the fancy mansion, they are forced to take a spritz of “pure molly.” This proves to be a problem since Bezzerides is at the party to observe stuff and now she can’t see straight.

We see a bunch of the powerful men we expect to see wandering about. Tony Chessani and Attorney General Geldof are there. Plus Osip and McCandless are making some kind of business deal where Osip essentially replaces Frank in the rail deal. Outside, Velcoro and Woodrugh sneak around in the dark. They are forced to beat down a few guards. Woodrugh sneaks in and steals some contracts from McCandless’ desk. But even more goes down inside the house. Some dude, who is probably important, takes a liking to Bezzerides. But as she witnesses the orgy playing out around her, she keeps experiencing flashbacks featuring a hippie looking guy. They paint the picture that this man sexually abused her as a child. In the bathroom, she tries to force herself to throw up the drugs, but she isn’t very successful. You guys are never going to guess who is at this party though. No it’s not Rust Cohle. McConaughey isn’t in this season of the show, remember!? It’s Vera, the missing person Bezzerides has been looking into it. Bezzerides grabs her and tries to leave. But not before she has to fight off her suitor and a security guard with a few well-placed slices of a knife. He doesn’t collapse instantly, but when he does it is in quite the pool of blood. While being pursued, Bezzerides and Vera somehow escape with Woodrugh and Velcoro.

So here is another episode where we learn a whole lot of stuff, but we don’t really seem that close to finding out the killer or what exactly is going on. The diamonds are important. The cop who gave Caspere’s valuables to Irina is important. But what does it all mean!? There are only two episodes of True Detective left and I expect lots of answers.