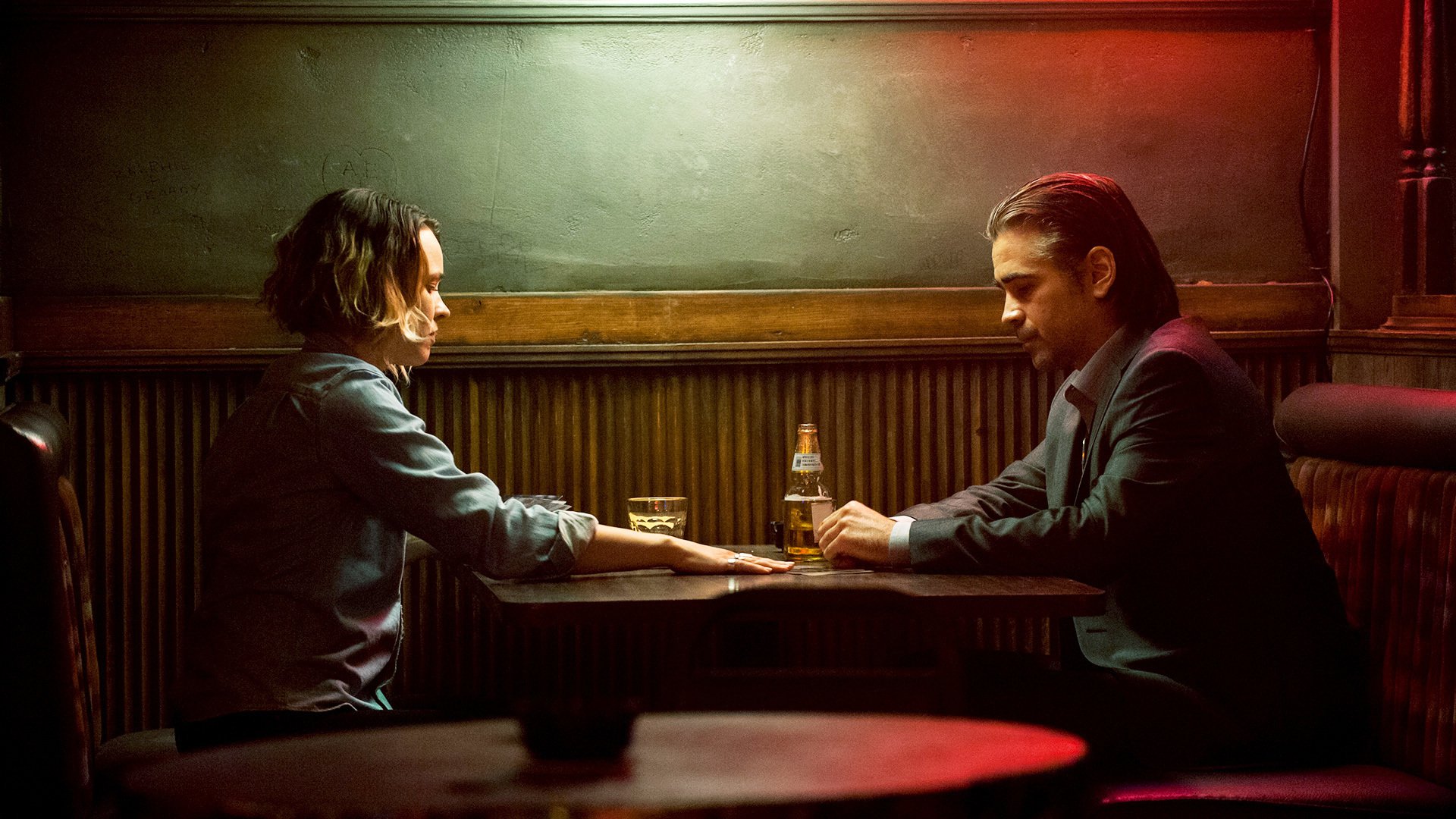 So we saw a big change this week on True Detective. After the epic shootout that capped off the previous episode, there was a time jump of a few months. Unfortunately that jump didn’t see Matthew McConaughey’s Detective Rust Cohle from last season take charge of the case. (What an awesome twist that would be.) But kidding aside, I am into this iteration of True Detective. Sure it’s a snail of a TV show and it’s like deciphering hieroglyphics to figure out what information is actually important, but I’m into it. Let’s see what our detectives are up to a few months in the future. Here’s our recap of “Other Lives.”

Back to the Future

In the aftermath of the big firefight on the street, the main suspect in the Caspere murder is dead. The shady Detective Dixon is also dead. Plus Frank and our three main detectives begin to see some change in their lives. Frank sips some coffee while we get some television viewing exposition. The aggressors in the “Vinci Massacre” have been assigned guilt in Caspere’s murder and the case is now closed. But also, the Attorney General is running for governor with big money at his disposal after getting credit for closing the Caspere case. Frank is surrounded with boxes while watching these news stories, a result of his still missing life savings. He and the missus must relocate to a smaller house.

Velcoro now works as a consultant for Frank, which means he collects money for him and hands out beatings when people don’t pay up. Also, in the most tragic development of the season, Ray Velcoro’s mustache is gone. No word yet on the circumstances of the disappearance, but I am ruling this a big ol’ mistake. It turns out Velcoro left his job as a detective soon after the shootout. The Lieutenant visits him from Vinci PD and politely evicts him from his home since those houses are for municipal employees only.

Bezzerides has been enjoying her time in group meetings for those accused of sexual harassment. She makes it fun by commenting on her status as a phallus connoisseur. No longer a detective, she works a desk at evidence lock up. Woodrugh is now a detective investigating insurance fraud, but we meet up with him during his suspension hearing. He still insists innocence for this case as well as his time in Afghanistan. At another wonderful hang out with his mom, she strongly disapproves of his upcoming nuptials. Turns out she also found his hidden stash of money from his time in the Middle East and spent it.

Okay, Vince Vaughn didn’t play Frank the Tank in Old School, but it sounds like a good gangster name for his character on this show. But don’t tell him I said that because he doesn’t like being called a gangster. He has a real back and forth episode. Two guys show up to the club and tell Frank that they used to be employed by Santos and want back in. Frank tells them to go away… and that’s it. It seems like such a throw away scene that it must be important. Frank goes on to meet with Mayor Chessani. We learn that a waste management company Frank used to own contaminated all that land that was bought up for the land deal. Being contaminated made it much cheaper for the state to buy. At the poker room, Frank asks Velcoro to follow Blake, his henchman, who he hasn’t trusted for a while now. But we’ll talk more about that in a minute.

We seem to spend a lot of time on the slow back and forth between Frank and his wife, Jordan. This episode, she begins to question all the illegal activities going on at the poker room and the club. She also reveals that she can’t have kids and would like him to reconsider adopting. It seems this argument was a big breakthrough for them because Frank leaves work early one night to watch some television with his wife at home. But of all the plot twists and over the top storylines, the fact that we’re supposed to believe this 6’5 man would have such a tiny couch in his living room is probably the most unbelievable moment yet.

This turned corner between the Semyons leads them to consider adopting a child, but Frank still has one eye on business. He makes a deal with an executive from Catalyst, McCandless, to get back in on the railway deal. If Frank can find the missing hard drive that was taken from Caspere’s house on the night Velcoro was shot, he will be back in on the deal.

Even with her new boring desk job, Bezzerides follows up with the sister of Vera, a missing woman tangled in the Caspere case. The sister received some photos that her sister sent that had been lost in the mail. They show some important men at a party and there are also pictures of the mysterious blue diamonds that were in Caspere’s safety deposit box. After some research, Bezzerides finds out that one of the men in the pictures is a senator.

While following Blake, Velcoro finds him meeting with Mayor Chessani’s son, and Dr. Pitlor. They pick up some girls and meet with Osip. Remember him? He was the guy who was going to do some business with Frank, but pulled back. So Bezzerides and Velcoro meet up at the bar. Neither one knows what the other is looking into, but Bezzerides shares what she has found. She doesn’t think the men killed in the shootout were responsible for Caspere’s death. Plus, wouldn’t you know it? The blue diamonds have vanished from evidence lock up. Fishiness level: high. Velcoro isn’t really interested in diving back in though. He’s out of the detective game. Well, momentarily at least.

State attorney Davis meets with Bezzerides, Velcoro, and Woodrugh to secretly reopen the investigation into Caspere’s death. She believes Mayor Chessani and the Attorney General colluded to pin all the corruption on Caspere. So the crew is tasked with rooting out the actual corruption. They are to track down the prostitute who stole the valuables from Caspere’s house. It was this lead that led the group to Ledo and the shootout last episode. Velcoro doesn’t want anything to do with this, but Davis promises she will help with the custody hearing for his son. His ex has pushed for a paternity test, so he is stressed about that. But Davis also drops this bomb. The police caught a serial rapist whose DNA is a match for his wife’s attacker years ago. So when Velcoro killed that guy he was told was the rapist, Frank was setting him up. He needed a cop on his payroll and that is how he got Velcoro.

Well now Velcoro’s newfound composure begins to come unhinged a bit. He follows up on his earlier lead by visiting Dr. Pitlor at his office. The conversation isn’t very cordial though. Velcoro rearranges the doctor’s face a bit. But he learns some valuable information. Mayor Chessani’s son, Tony, puts on the prostitute parties. He’s a pimp with political aspirations, which ironically is the profession listed on my LinkedIn profile. Of course, Caspere was also involved. According to Pitlor, Mayor Chessani isn’t in on it. That seems hard to believe. But apparently the son uses the parties to make friends with important people in politics and business. Then he compiles photos and such for blackmail purposes. One of the people Pitlor mentions is McCandless. No wonder he wants Frank to find that hard drive.

The Corrupt and the Flatulent

This would be a good time to mention Detective Dixon, who died in the previous episode. At the bar, Bezzerides questions how Dixon didn’t realize the scene was a cookhouse. It was essentially his fault that they walked into the ambush. Lieutenant Burris mentioned earlier that Dixon had a lot of photos at his house. So these are some shady things, but the real kicker comes when Woodrugh is asking around at some jewelry stores about the missing blue diamonds. It turns out Dixon had come through asking about them before the detectives had found them in Caspere’s safety deposit box. The jeweler went on to describe Dixon as “flatulent.” Are we to believe that this man is both corrupt and unwilling to control his farts in public?! What a twist this is to our case.

Bezzerides meets up with her sister and requests that she get her into one of these shady prostitute parties. Afterwards she and Woodrugh drive up to the location where Vera made her last phone call before she disappeared. Also, just like every other location of consequence on this show, it appeared as a recent destination in Caspere’s GPS. When they arrive, the cabin there is deserted. It’s all locked up, but Bezzerides notices a bunch of birds circling nearby. A little ways away, there is a small shed. Inside it is a whole lot of blood. It looks like someone was murdered here? Was it Vera? Caspere? My patience for trying to remember every minor character’s name!?

The episode ends with Velcoro interrupting a nice morning chat between Frank and his wife. She talks about wanting to sell the club. Also it seems like adoption is becoming more likely. But that’s going to have to wait because Ray Velcoro is knocking on the door and “we need to talk.” Until next week, True Detectives!