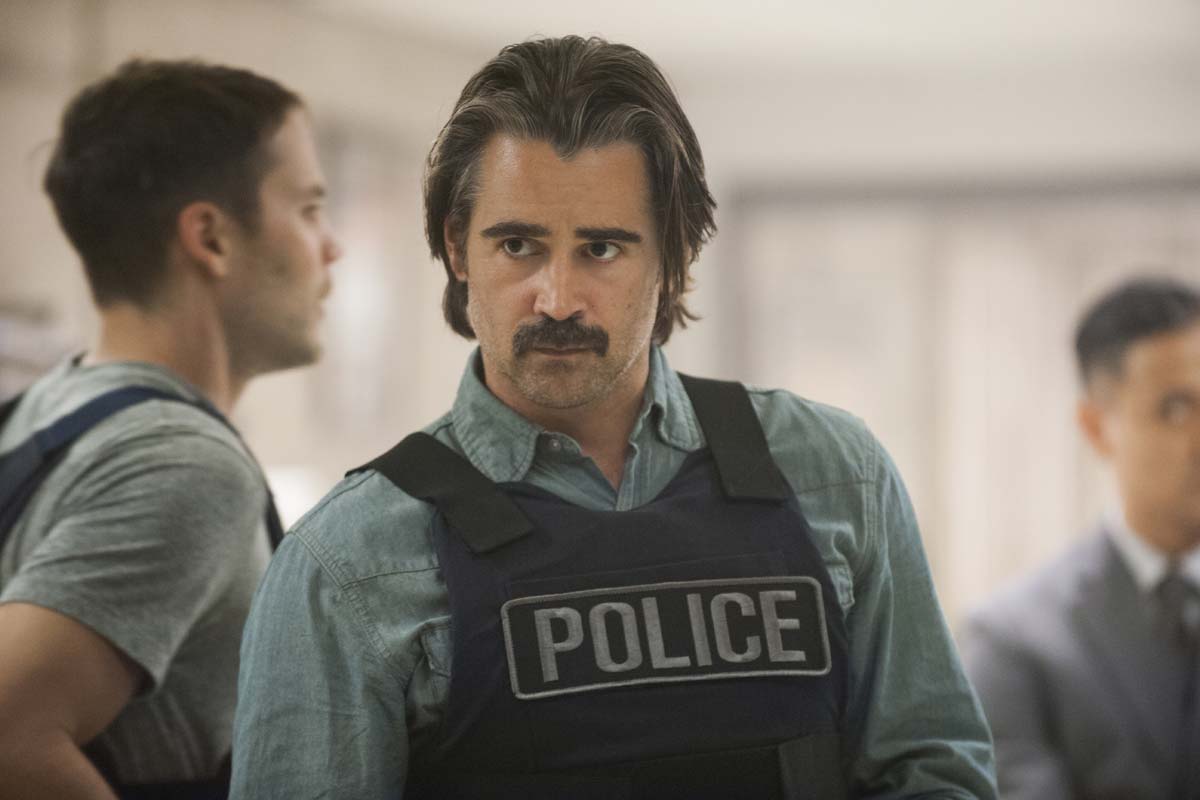 True Detective ramped up the action this week. We expect brooding police officers and shady business deals, but not usually a full on firefight in the streets with tons of casualties. (Interestingly we got a shootout at the same point last season.) But this fight was just the last little while of the “Down Will Come” episode. Before that we learned some subtler, potentially more important, bits of information. Here’s our recap.

Since Frank tends to deal separately from the rest of the primary characters, let’s see what he was up to this week. Well, he’s mad at his landscaper because the avocado trees aren’t growing. “True Gardener: Life is a Dead Avocado Tree.” They’re not bearing fruit… like Frank’s loins. Yeah, we get the symbolism. That about sums it up. He and his wife Jordan are still fighting because Frank lost his mind a bit after his money disappeared. He says he wants to put their plans to have a child on hold until he figures out this whole mess.

Business wise, Frank is very busy. He meets with a group in a bakery to make a deal for drug distribution in the club he now runs again. Remember last week, he performed some dental work on the previous owner. The conversation sounds like an MBA lecture with some narcotics mixed in. Later he shakes down another former partner for regular payment. But the most interesting meeting was one Frank asked his wife to set up. It turns out the dude is a former fling of hers, but Frank would still like his investment in the club. He doesn’t give Frank a straight answer. Back at the Poker Room, Frank shows his distrust of this guy, Blake. He’s trying to find out if someone on the inside is after him. After an episode full of strong arming people, he lets his guard down for a second with his wife. Could they walk away from all of this? Do they have anything left?

Woodrugh apparently had an interesting night between the two episodes. He wakes up in the bed of Miguel, his military friend we met last episode. But he still isn’t ready to grapple with his sexuality. In fact he tries very hard to ignore it completely. When he arrives at where he left his motorcycle, the bike has been stolen and a whole bunch of photographers and journalists are there to accost him about the apparent war crimes he committed as a military contractor. So this is a pretty bad morning for Paul. He calls Velcoro to come pick him up. When he does, Woodrugh admits to doing all of the bad stuff he’s accused of. But Velcoro isn’t one to judge the screw-ups of others. They also comment on the state of instant modern journalism. True Detective, always so topical.

Woodrugh meets with his ex-girlfriend, Emily, at a diner. Neither one seems to really want to get back together, but when she says she’s pregnant, that’s the direction the conversation goes. She’s going to keep the baby. Woodrugh proposes. It’s all very romantic? No, not really. It seems he is doing all this to suppress his homosexuality once and for all. This is going to be a great marriage. I can already tell. When Woodrugh says “I love you,” Emily may have the quote of the episode in response. “I guess I love you too.” This describes the situation perfectly. 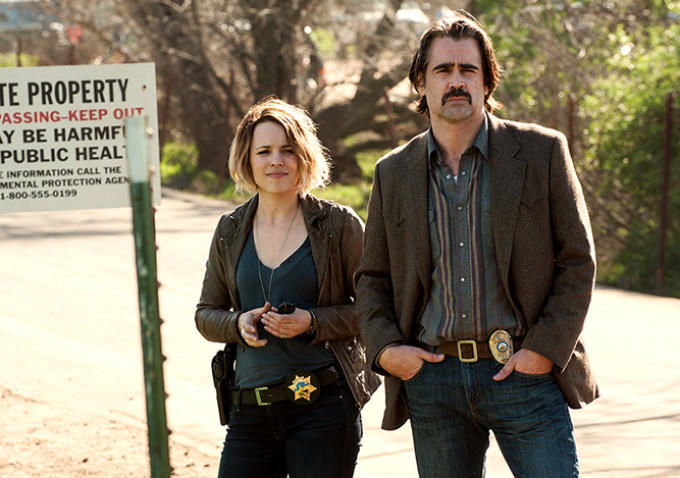 The dynamic duo of Bezzerides and Velcoro seem to have bonded a bit after their chase scene last episode. Velcoro tells her about Mayor Chessani’s vendetta against her after she went to his house. Velcoro also thinks Vinci is untouchable and that the state investigation will end with money changing hands. But still they pursue the case by questioning Chessani’s daughter. They ask her about Caspere. They also learn that her mother battled schizophrenia and eventually hung herself after being committed. But wouldn’t you know it? The doctor in charge of the mom was Pitlor. He’s the creepy guy with all the plastic surgery we met a few weeks ago. The daughter leaves them with the not so secret fact that her father is a bad person.

It seems Bezzerides and her sister, Athena, are on better terms than when they talked in the first episode. Athena claims that her work as a cam girl is only temporary until she can pay for art school. She also mentions in passing that some of her colleagues, who are prostitutes, attend exclusive parties. They sound like something our victim may have been interested in. Also, in a bit of personal exposition, we hear about how tough it was on the sisters when their mother died.

In a more official capacity, Bezzerides and Velcoro visit her dad to ask if he knows anything about Pitlor. He knows Pitlor and the Chessani family from years ago. He mentions that he knew them from “Chassani’s Lodge.” I bet that’s a nice wholesome place with shuffleboard and such. Or a creepy cult resort! Also, did you know Velcoro has a big aura about him? That’s probably just the smell of unwashed denim jackets and bolo ties. The pair go on to visit Fresno, CA. Bezzerides saw soil readings from the area at the mayor’s house and Caspere’s GPS also showed he visited there. It turns out a lot of that land has been contaminated and abandoned.

Bezzerides’ favor within her department has taken a turn recently. Her ex (kind of) boyfriend has filed a sexual harassment claim against her. It has also been revealed that she and her partner, Det. Ilinca, had a short fling in the past. These are both no-nos apparently. So she has been suspended from all duty except the special detail investigating Caspere’s murder. Velcoro’s personal storylines are sparse this week. At his regular bar meeting, Frank offers the detective a full time job as his muscle, but he’s turned down. Also, at a secret meeting with his son in the boy’s yard, Velcoro seems to imply that he will be stepping away from their relationship. He gives his father’s badge to his son to remind him of where he came from. He then teleports from the spot…or snuck back into the shadows when the boy’s back is turned. I choose the sci-fi explanation.

Okay now onto the big case break…that actually doesn’t really solve the case at all. Woodrugh finds a watch belonging to Caspere at a pawnshop. They find out the seller was a prostitute who took it from Caspere’s house. So the cops are going after her pimp, Ledo Amarilla, for the murder. They find out where he is, so a small group of cops led by our three main characters go after him. But it turns out this is going to be quite the task. Ledo and his people have machine guns and begin taking out cops. As the criminals try to escape in a car, they crash into the side of a bus and are trapped. They come out of the car with literal guns blazing. A number of civilians standing around protesting the proposed rail deal are gunned down. Bezzerides runs out of bullets. Ledo takes a man from the bus as a hostage as Velcoro and Woodrugh slowly approach him. With no way out, Ledo shoots the man. Immediately the two officers open fire on Ledo and kill him. Only Bezzerides, Velcoro, and Woodrugh remain standing.

The scene on the street is pretty devastating. Police officers, bad guys, and civilians lie dead. The three leads all break down to a certain extent. Understandably, Bezzerides and Velcoro are visibly shaken by the carnage. Woodrugh’s reaction is less pronounced, possibly because he has seen violence like this before in wartime. Was Ledo really Caspere’s killer or did a lead put the officers in the wrong place at the wrong time? Since this is only the halfway point of the season, it’s probably the latter. But what will the aftermath be like for the detectives, both professionally and emotionally? Find out all this and more next week on True Detective! Dun, dun, dun!