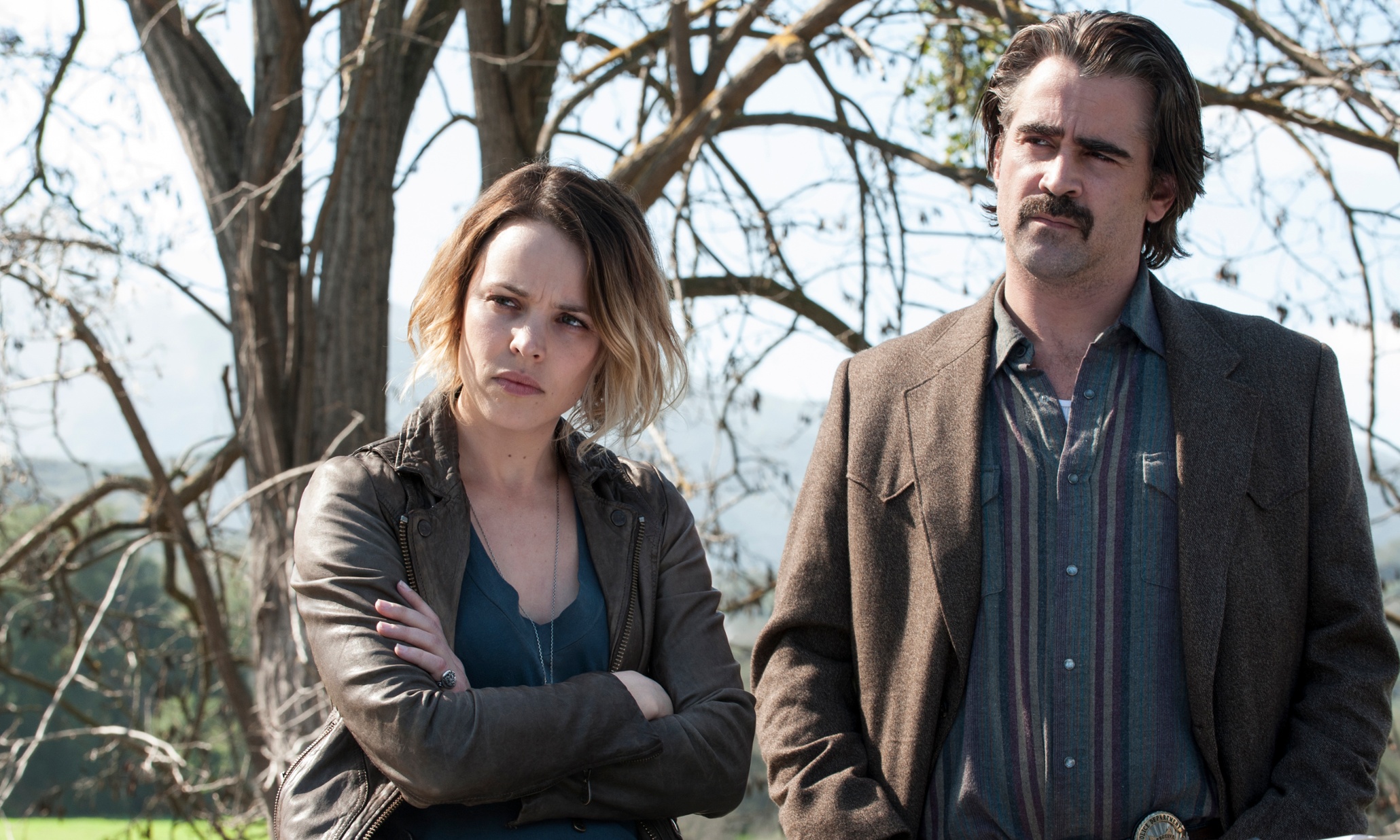 Just two weeks ago I was recapping the Game of Thrones season finale. Avoiding cross-series spoilers, we fans were questioning a pretty clear death scene. In a world with magic and zombies and stuff, this character couldn’t be dead. Could he? Well now we’re in a world without magic. True Detective just seemingly killed its lead character in the second episode of the season with two shotgun blasts to the chest and/or stomach. But he couldn’t be dead, could he? Maybe he’s a White Walker. Let’s try and digest what just happened in episode two of True Detective, “Night Finds You.”

The episode opens with some back-story on our non-detective, Frank Semyon (Vince Vaughn). Still stressed from the disappearance/death of his business partner, Ben Caspere, he lies awake in bed staring at a water stain on the ceiling. He tells his wife about how his drunken father used to lock him in the basement. On one occasion, the father got arrested and Frank was down there for days with no food and rats running about. He wonders if he died down there and this is all a dream? Well that sure would be a twist. Or what if a rat bite turned him into Rat-Man, whose only superpower is to conduct shady business deals?

Our detectives, who ended episode one in a stare down, are now with a coroner learning about their dead body, Caspere. He was tortured. His eyes were burnt out. Wow, that’s intense. Surely that’s gory enough. “More gore!” said HBO. …And his penis was shot off with a shotgun. “Umm, okay that’s enough,” HBO mumbled while vomiting in the corner. The coroner scene is broken up with the different police agencies debating each other’s involvement in the case. With the help of the county, the state is planning to use this case to take a look at what’s been going on in the corrupt city of Vinci. Bezzerides (Rachel McAdams) and Woodrugh (Taylor Kitsch) are both separately advised to conduct the murder investigation with an eye on Velcoro (Colin Farrell) and Vinci. On the other side of things, Velcoro is told by his mayor to defend the city over solving the case. A city that only has 95 residents since industry forced most people out many years ago.

Frank had a busy episode after contemplating his existence. He meets with Velcoro to discuss the details of Caspere’s murder. Frank needs this case solved since whoever killed Caspere has his millions of dollars that were meant to be invested on the railway deal. This was all the money he had. We learn this after Frank meets with the company, Catalyst, and he is told that Caspere hadn’t completed that transaction with Frank’s money before his death. So he’s going to need to get that money back to buy in on the land deal associated with the new railway. Frank also meets with the mayor to let it be known that he wants some time with the killer once he’s found. The mayor is consistently unhelpful with everyone.

Woodrugh has played a bit role in the series so far. He’s in on the case, but he’s just doing the grunt work with the detectives, Bezzerides and Velcoro, leading the show. But we’re slowly starting to get a picture of what Woodrugh’s deal is. In return for his work on the investigation, his suspension for solicitation will go away. He also could become a detective. But all he wants to do is ride his motorcycle on the highway. Later, he visits his mom with what appears to be KFC original recipe chicken. (When recapping a show it’s important to include vital details of the episode. The type of chicken they are eating seems like it may be very important to the case as a whole.) His mom is a bit too touchy feely. She invites him to stay over a few times, but he can’t get out of there fast enough. I wonder if Paul’s middle name is Oedipus. Elsewhere, after questioning the suspension and his commitment to her, Woodrugh’s girlfriend dumps him. He doesn’t really seem to care. After some comments throughout the episode and some staring down of costumed men from a far, this could be because he is gay and trying to hide it from the world. But he also might be homophobic. We can’t be sure yet. We still have a lot to learn about Woodrugh.

As Bezzerides and Velcoro work the case together, the pair has some interesting exchanges. They visit Caspere’s ransacked home and look into his schedule. They meet with a psychiatrist guy, who Caspere frequented. But the main break in the case didn’t come from the detectives at all. Frank learned while questioning prostitutes that Caspere has a house in Hollywood where he brought girls. More on this development later.

In the meantime, Velcoro’s life needs to fall apart even more. When showing up to meet his son, his ex greets him instead. She informs him that their son is afraid of him and doesn’t want to spend time with him anymore. She is going to petition for sole custody after the events that happened in the last episode. (Remember he took a set of brass knuckles to the dad of his son’s bully.) Velcoro claims ignorance on the subject. She says she is going to get a paternity test if he doesn’t agree to these terms. Velcoro admits his son is all he has left. 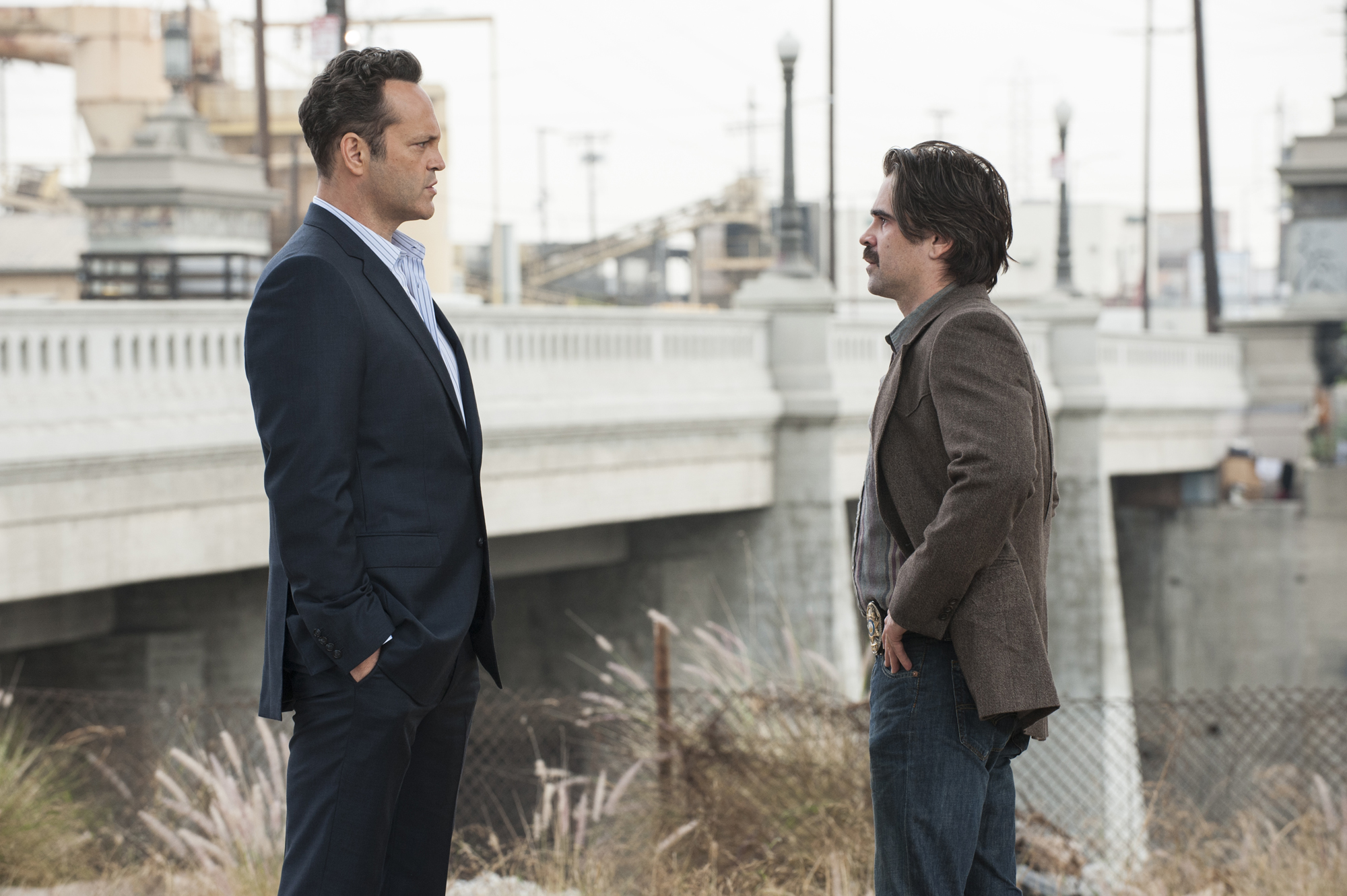 At their regular meeting at the bar, Frank and Velcoro exchange notes on the murder case. Frank has lost his patience after being disrespected all day. But he tells Velcoro that if this case goes well, Velcoro could be chief of police, which our old broken detective doesn’t want. But Frank reminds him that he doesn’t have a say in this matter… or anything really. Velcoro has reached his breaking point after the meeting with his wife and he makes it clear that he doesn’t really have a reason to live anymore. Either way, Frank sends him to Caspere’s Hollywood house to take a look.

Naturally, the middle of the night is the best time to do this. Upon entering, we see a lot of stuff to creep us out. There is a big pool of blood on the floor and a row of animal masks on the wall. Also, the radio is playing near a sex swing. So Frank thinks everything is safe (!?) and he holsters his gun. In a small room there is some computer equipment and possibly a camera that moves on its own. Or maybe someone is controlling it remotely and watching. As he walks out, a guy in a raven mask unloads a shotgun into his chest. Velcoro falls to the ground and is met by a second blast to the torso.

True Detective is definitely a creepy show, but I wasn’t expecting this so early in the season. So now the plot thickens. Our main detective has become a victim. We don’t know that Velcoro is dead for sure, but the second shot sure didn’t make a potential recovery any easier. I thought the stage was set after the season premiere, but predicting what is going to happen on this show seems like a task worthy of a True Detective.

Ceres: Everything You Need To Know About This Exciting Little Planet