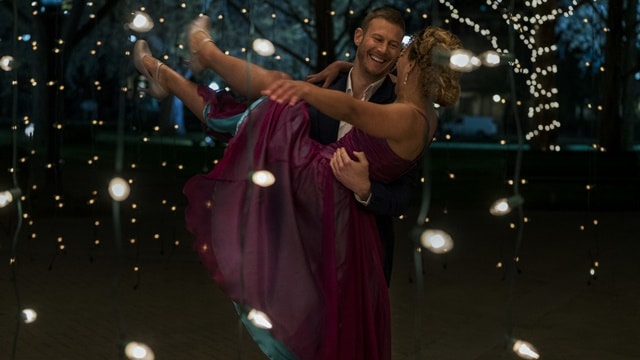 No time for niceties, I’m afraid, my friends, we have so much to cover. The Umbrella Academy has turned out to be an embarrassment of riches, so full and vital that paring a review down to sub doctoral thesis length is an act of love and masochism (as if you could separate the two). Each hour-long episode manages to be both plot heavy and thematically dense. It’s a gift and it’s a lot so let’s just dive right in.

Episode 6 is brought to you by the letters “R” – as in “relationships, primarily romantic” and “C” – for “communications, and the failures there of.”

The episode opens with a glance at Klaus’s Vietnam jaunt. We meet Dave, and see through a perfectly edited two and a half minutes of his and Klaus’s relationship, presented as a gentle, warm attraction, strong enough to lead Klaus to the front line. I have focused largely on the writing and acting on the show, but by developing an entire genuine, authentic feeling relationship with no dialogue in the span of one hundred and fifty seconds, The Umbrella Academy proved that absolutely no crew member on this show is simply phoning it in or cashing a paycheck. We are unlikely to see a more skillful editing this year.

Klaus, who has been wonderful and snarky, with sweetness around his brittle edges, transforms into something very different after his doomed romance ends with Dave killed on the front lines. He is haunted, yes, but he is also purpose driven for the first time since we’ve seen him. Readers of the comic know that Klaus’s codename is Séance – and that he can only conjure the dead when he is sober. Even before Luther tells the assembled family members about the apocalypse and its three-day arrival time, Klaus was flushing his drugs down the toilet. After, he is absolutely determined. With only three days to live, he wants to spend time with the only person who made his life feel worthwhile. So he asks Diego to tie him to a chair, unable to trust himself to maintain his sobriety. Diego develops a deeper understanding of his brother; they both have loved and lost.

Elsewhere, we catch a quick glimpse of young Allison and Luther, sharing a very Royal Tenenbaums-stolen evening in a tent. Before they have a chance to share a face, however, Hargreeves finds and reprimands them, reminding them that fun and games are restricted to Saturdays between noon and noon thirty. Adult Allison and Luther have no such restrictions though. In light of the apocalypse, Allison is determined to get home to spend her last time on earth with Claire. Luther, having discovered that Hargreeves never even opened the data he sent back from the moon (more on that in a few paragraphs down, patience), is more than content to abandon the whole “saving the world” thing, in favor of spending one last day with someone he loves. In a moment that is so dreamy and romantic, we must marvel at the pure audacity it took to include it – organically! – in an ostensible super hero show. Luther is transformed back into his normal body, and he and Allison share a perfectly choreographed dance and a kiss.

The internet is on fire with some genuinely absurd opinions about The Umbrella Academy romanticizing incest. The first, and most obvious argument to this is that IT’S NOT INCEST, they’re not related, and they were raised in a very Charles Xavier’s School for Gifted Youngsters fashion – as teammates and partners, not siblings. But, and this is a personal bugaboo, so please forgive me for the tangent, if it had an incestuous bent, for it to be “romanticizing incest,” it would necessitate that the show said the thing that made the relationship interesting or worthwhile was the incestuous element – call it something like “forbidden love” or that kind of nonsense. The show – the story – doesn’t call Luther and Allison star-crossed lovers. It also doesn’t prioritize their romance. It simply presents it, as part of the greater story that’s being told. A part that, in addition to being perfectly legal and unable to result in deformed babies, is lovely and sweet and simple and straightforward. A romance that finally convinces Luther to leave home and to fly back to LA with Allison to spend the end of days with her and Claire.

And finally, we have to deal with the ramifications of our final romantic relationship -because love can be used for ill as well as good. Vanya’s made vulnerable by her attachment to Leonard, so much that she doesn’t see his subtly nefarious actions. We know that he stole and disposed of her pills. But we see him in this episode continue to draw out her resentment of her siblings. By establishing himself as “on her side” and committed to her, he is able to drive a wedge. When he first met Allison, he mentioned that he knew she was in the Umbrella Academy and then points out that Vanya wasn’t. When he is in the Hargreeves home with Vanya to tell her family about earning first chair, he points out that she is in none of the pictures, precipitating a large confrontation. He has made sure she feels isolated from them, even before she has had a chance to talk to them.

What We Have Here is a Failure to Communicate

I promise I’ll try to be brief, because my word count is already way up. The Umbrella Academy is a show that draws out that if people occasionally just said what the hell was happening, maybe there wouldn’t be so much trouble. We see it when Vanya goes to see the family; they immediately stop talking about the apocalypse. Vanya feels isolated and omitted – more family business she is not a part of. When Allison tries to go after her, Luther stops her, preventing any hope of reconciliation. I will have more to say on that in a few reviews, so check back with me! And then there’s Hazel and Cha-Cha, who each receive orders to terminate the other. Cha-Cha takes Hazel to the woods to dispatch him, but he gives an impassioned speech about longing for a partner, maybe one that was right in front of his face the whole time. Cha-Cha clearly think she’s talking about her, though neither acknowledges it, and allows him to live, returning to the hotel with a softer dynamic between the two. Of course we know he was talking about Agnes the donut lady, and when Cha-Cha finds out, she reacts with the exact restraint we’ve come to expect from her, zero restraint.

And Now for Some Quick Plot Stuff, to Maintain Coherence

Five infiltrates the Commission, finds out who had his case and discovers the name Harold Jenkins. He then messes up with entire Commission (pointing out that Five is a bad ass is just redundant at this time. He obviously is. He’s the best. He must be protected at all costs) and then turns back time, effectively undoing almost the entire episode. The cajones of this show, guys. He lands on the Hargreeves table, just as the others are deciding that since they failed to save the world the first time, maybe they should just give it up. Just in time to deliver a rousing cowboy speech and get everyone back on track. Because he is the quantifiable best.

And that’s the nutshell study of episode 6. About 7 million other things happen between here and the finale and I can’t wait to talk about them all. Meet me in episode 7!