Home NewsEntertainment ‘Gotham’ Lacks a Sense of Urgency, Which Is Inexcusable at This Point
EntertainmentFeaturedTV and Movies

‘Gotham’ Lacks a Sense of Urgency, Which Is Inexcusable at This Point 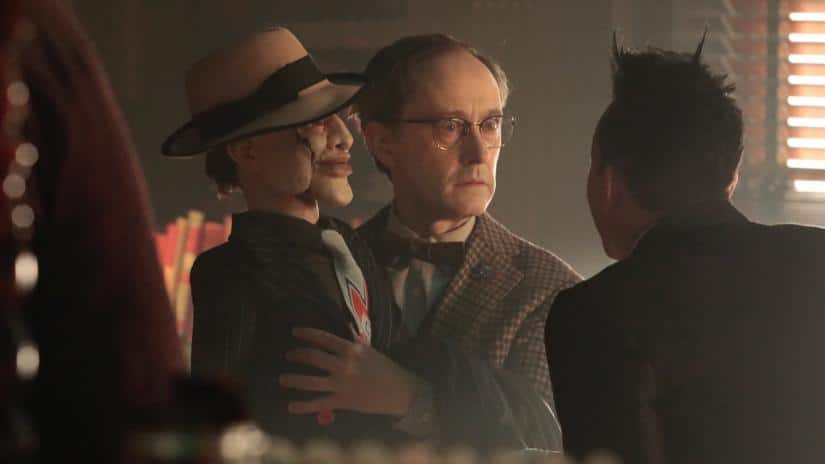 Even by Gotham standards, “Nothing’s Shocking” is a disappointing hour of television. And that’s really frustrating because, quite frankly, there’s just no excuse for it at this point. And let’s be clear—as I’ve said all season, I’m fine with the craziness. Mild-mannered guy who channels his rage through a ventriloquist’s dummy who happens to be a gangster from the prohibition era? Why not? Sewer mutants with Wolverine-like claws? No problem. Shape-shifting psycho killer? Fine. Gotham’s done way worse, so nothing shocks me at this point.

But the real problem isn’t the craziness—it’s that, once again, Gotham has somehow managed to make crazy boring. And that’s the one thing a show like this can’t afford to be, because all we really ask of Gotham is that it entertain us. It doesn’t even have to be good in the traditional sense—just fun to watch. And this just wasn’t. I mean, there wasn’t a single explosion this week. Not one. The city of Gotham is filled with nothing but psychopaths and career criminals at this point—how hard can it be to find something for somebody to blow up? It’s like they’re not even trying.

Plus, this is one of the final episodes of the series, which means there should be some sort of clear-cut strategy for how to get us to the end and what we should be expecting along the way (at least in a general sense). But, at this point, it just feels like we’re killing time until we get to whatever that initial flash-forward was to start the season and, of course, the inevitable appearance of Bruce Wayne as the Dark Knight. The toxins in the river have apparently taken reunification with the mainland off the table for now, so there’s no urgency around that. I don’t give Ed’s submarine much chance of success, but at least he and Oswald are doing something.

It almost seems like the writers could only come up with material for about five episodes, but they have to fill twelve, so they just keep bringing in new characters every week that we have no reason to care about. And the ones that we do want to see aren’t around. I mean, Jeremiah Valeska just fell into a vat of freaking acid last week, and now you’re gonna take a week off from that story to shoehorn in yet another ancillary character from the Batman universe? I just don’t know what they’re thinking at this point.

If the show were more case-of-the-week driven (which it actually was at one point), the Jane Cartwright/Jane Doe story might make more sense. She’s a sympathetic character, and we also get a glimpse into Harvey Bullock’s past and what probably turned an idealistic rookie cop into a cynical detective. That would have been a great story to tell a few seasons ago. But, this late into the show’s run, it just feels like a waste of time.

Four episodes left. Still plenty of time to get focused and end things on a high note. But they’ll have to pick up the pace to make that happen.

Three Days from the Apocalypse, S1E6 of ‘The Umbrella Academy’ Takes the Time to Be Dreamy & Romantic

use to love the show now it sucks