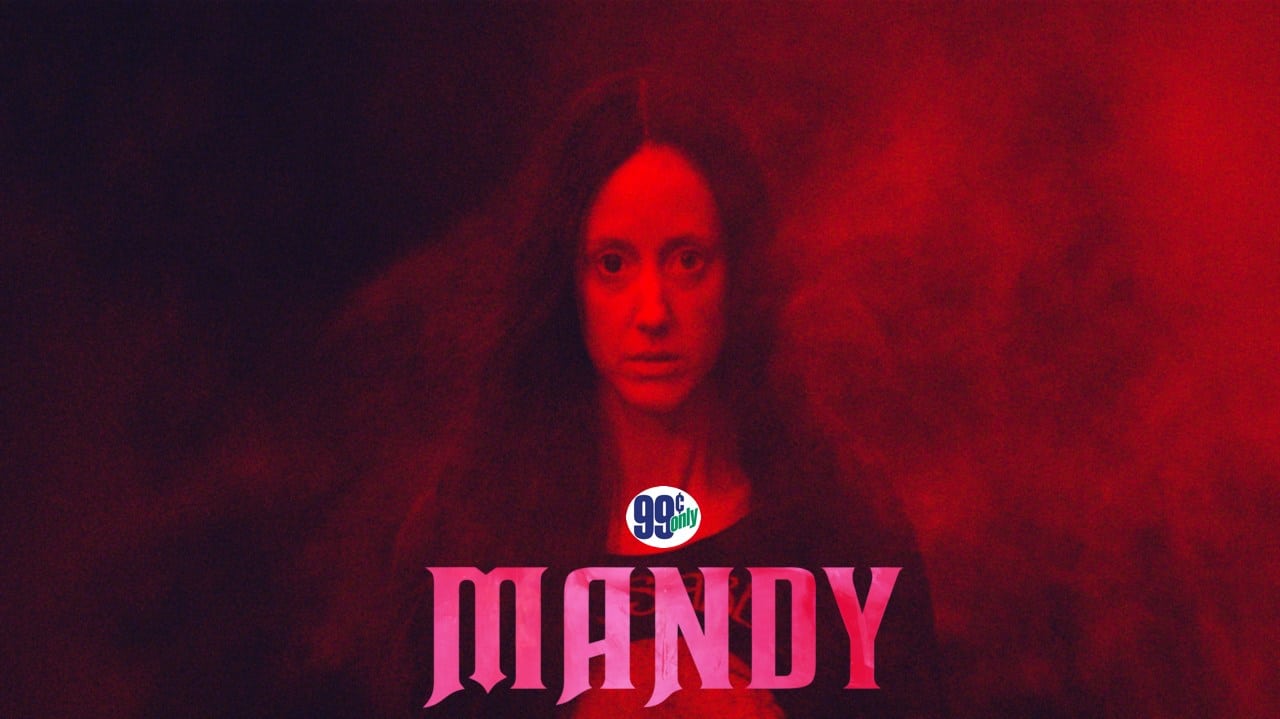 This week, Nic Cage brings the rage to a horror/revenge thriller unlike any other with Mandy.

I Come for the Reaper

Red (Cage) and Mandy (Andrea Riseborough) share an idyllic existence in their secluded mountain home. But when the enigmatic, folk singing leader of a roving hippie death cult takes a shine to Mandy, he summons his minions – including a masochistic, seemingly demonic biker gang – to bring a brutal end to the couple’s would-be Eden. So begins the beautifully bat-shit crazy ride that is Panos Cosmatos’ bloody, psychedelic horror opus Mandy. 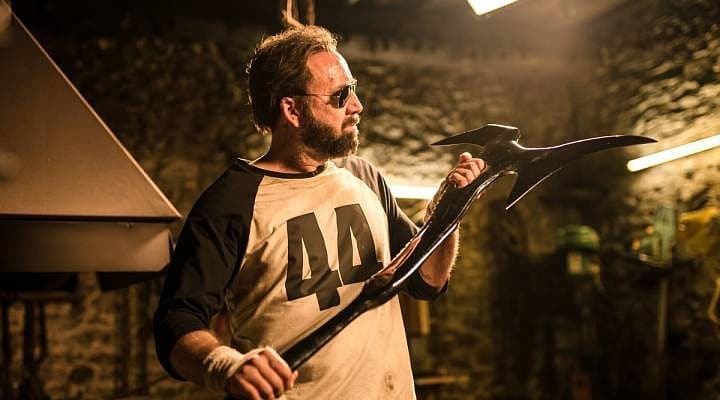 A Psychic Drowns Where the Mystic Swims

Yeah, we scoffed when we heard the new Nic Cage movie was actually pretty great too. And who could blame us? After nearly a decade of melodramatic mugging in all manner of B, C, and D-movie trash (not that there’s anything wrong with a little trash), the former Oscar winner had given little reason to get excited about any movie with his name on it. There was, however, reason to believe Mandy might live up to the hype, and the reason was that the film was being co-written and directed by Panos Cosmatos.

If you’re not yet familiar with that name, learn it now, ’cause we’re more than a little confident you’ll be hearing it for years to come. Mandy may only be Cosmatos’ second film, but the handful of adventurous cineastes and genre freaks who sought out the director’s feature debut – 2011’s lavishly produced, and utterly mind-boggling cult oddity Beyond the Black Rainbow – have spent the past few years shouting the director’s merits from the mountaintops while anxiously waiting to see what he’d deliver with his followup. Little did we know (or expect) that Cosmatos’s second film – a Nic Cage starring action/horror revenge drama at that – would be the one that saw him fully deliver on the arthouse B-movie ambition that made Beyond the Black Rainbow such a compelling (if often frustrating) genre treat. 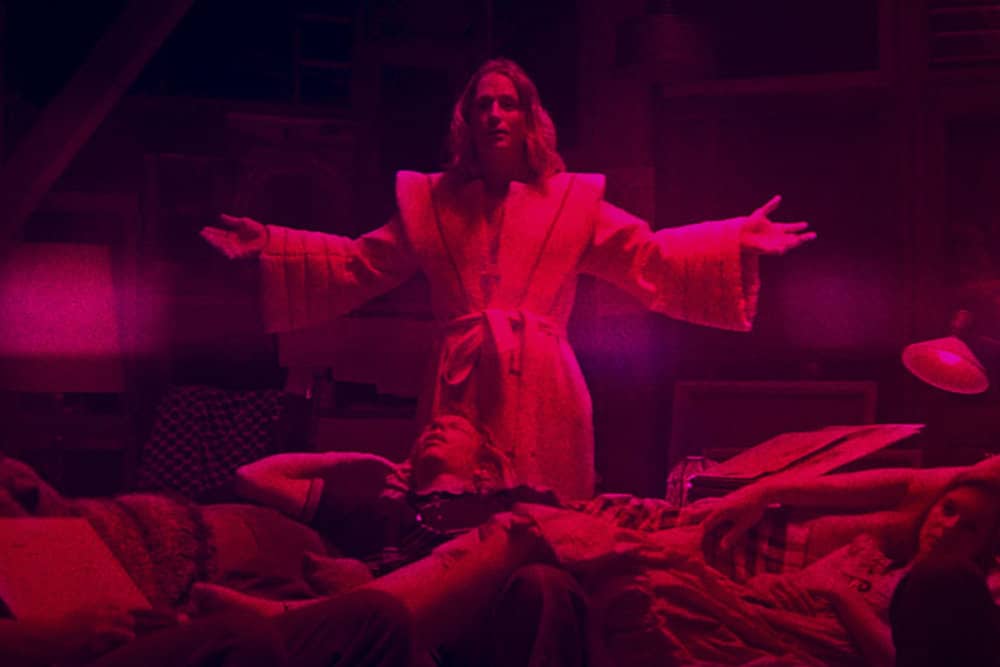 Make no mistake, Mandy is every bit the trash cinema styled story that Cage has almost exclusively gravitated toward in recent years. The film’s overarching narrative is a relatively straightforward tale of revenge that finds Cage’s unassuming lumberjack out for blood in the wake of an unconscionable act violence eviscerates his bucolic existence. It’s what Cosmatos does with that simple setup that sets Mandy apart from its genre contemporaries. Even from its opening frames, the director fills Mandy‘s colorful, yet relentlessly bleak canvas with all manner of unsavory characters, depraved acts of drug-addled villainy, and savage bursts of bloodletting that ultimately turn the simplistic, black and white nature of the revenge thriller genre into a phantasmic technicolor-tinged fever dream of apocalyptic imagery and ominous overtones.

If Cosmatos had merely let Mandy bask in unabashed sanguinary glee for the entirety of its 121 minute runtime, that likely would have been enough to make the film worth your time. That Cosmatos accomplishes just that while simultaneously delivering one of the most visually striking films ever produced almost seems like overkill (pardon the pun). That is not an overstatement, by the way. If nothing else, we’re completely confident in stating that you’ve never seen anything quite like Mandy. As much as we’d love to tell you all about the film’s surrealistic, pseudo mystical visual palette, and detail how its austere blend of gory elegance and cooly calculated pacing breeds a sort of awe-inspiring – and at times unnervingly peaceful – visual nihilism, it really is best to let you discover those mind-melting elements on your own.

It should be noted that Mandy‘s expressionistic visual approach is often the direct result of some hallucinatory drug or another taking control of the narrative, which means the entire film unfolds with anxious energy of some virulent augmented reality, or an unshakeable hallucinogenic nightmare. As such, there really isn’t much the actors could do within the film’s gruesome, sensory overloading style that might be considered going too far. Of course, that means even a deliriously over the top turn from Nic Cage doesn’t feel out-of-place in all the madness and mayhem. Point of fact, Cage’s sublimely overwrought work in Mandy is the best the actor has delivered in years … and we’re every bit as surprised by that as you. 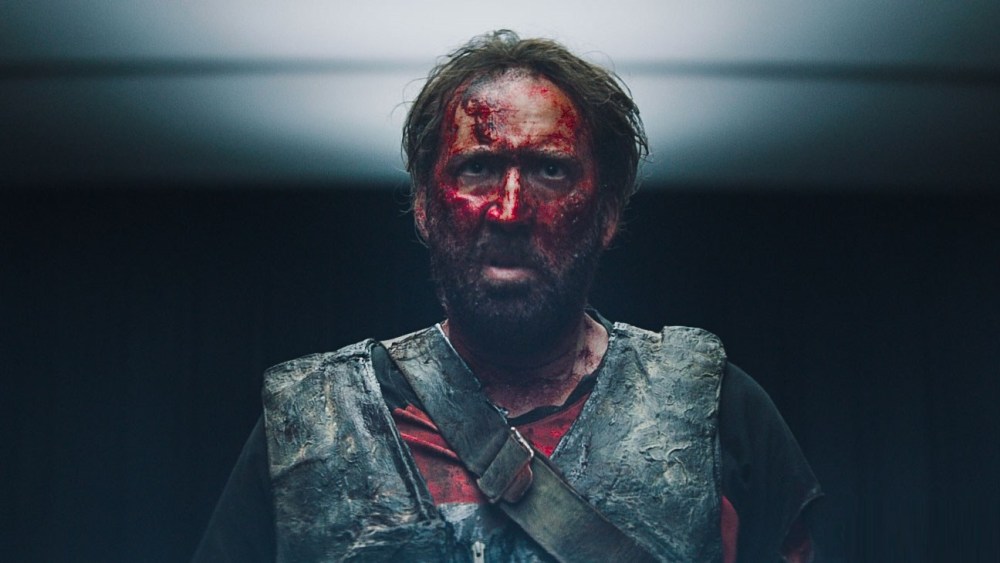 Hell. Yes. Look, Mandy is certainly not going to be everyone’s cup of tea. The film’s deeply disturbing narrative, outlandish stylistic flourishes, devilishly melodramatic energy, and insatiable bloodlust will undoubtedly be a turn off to many. But those of you who enjoy your tea with a touch of psychedelic imagery, a heaping side of blood spatter, and just a hint of evil new age mysticism will find a most delicious cup in Panos Cosmatos’ Mandy. Just FYI – even if Mandy is not your style, you should probably drop the $0.99 anyway, and just fast forward to the film’s now infamous chainsaw fight. Trust us.