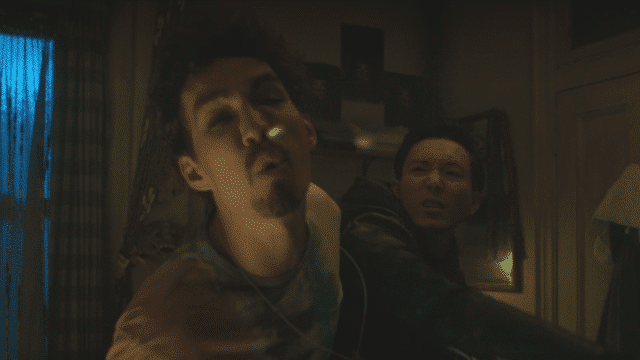 A curious consequence of re-watching The Umbrella Academy is watching it through the lens of knowing the end game and where it is going. If, like yours truly, you know the source material, it’s like watching it through bifocals, rose-colored to boot. There was never any mystery, but getting there was a blast. Still, I find myself wondering if green, unaware viewers believed at episode nine, with the same fervor of margarita optimist Five, that all was well, disaster averted and all that was left was the crying. It would not be unusual or unreasonable to suggest. Many shows use the penultimate episode of a season to wrap up the central storyline and reserve the finale for denouement. But. I’m getting ahead of myself. Let’s take a look at this tangle of thorns.

Clearly, deliberately, with no subtext or subtlety, let me get my spoilers out-of-the-way quickly and effectively. Because this is the episode where Vanya kills Leonard. And good god, it’s satisfying. UA (yes, it’s taken me this long to decide to abbreviate it, judge as you must, may the punishment fit the crime) has done an excellent job of quietly exploring toxic masculinity in its various guises, but the most unexpected and fascinating in many ways is Leonard, because so much of his is predicated on his failure to fit the mold of the conventional alpha male. Leonard is not strong. Leonard is not large. Leonard has a face you would shrug and call “fine.” But he is clever and has a classic abuser’s manipulative talents. After Vanya cuts Alison’s throat, Leonard is quick to assure her that her family won’t forgive her. They won’t accept her. He is all she has. History is littered with stories of women who stayed in abusive relationships because they were isolated from family, friends, and made to feel like only their abuser would ever value and love them. Additionally, when Vanya finds Hargreeves’ journal, as purloined by Leonard, and correctly surmises that ol’ Lenny has been manipulating the crap out of her, he pulls a classic turn about – look what I’ve done for you. I unleashed your power. You owe me this.

Unfortunately for the erstwhile Mr. Jenkins, he DID unleash Vanya’s power. And his supreme arrogance kept him from realizing that if billionaire genius playboy Reginald Hargreeves couldn’t figure out a way to control her powers, dumb-dumb everyman Leonard certainly can’t. Vanya swiftly and adroitly turns him into a pin cushion using far more knives than were strictly necessary. It is, for all intents and purposes, Vanya’s first kill – the first one she is aware of and that she brought about knowingly and willfully.

But Vanya is not the only Hargreeves with vengeance on the mind. Luther, having been filled in by Pogo about Vanya’s powers and Hargreeves isolation chamber for her, welcomes his remorseful sister back into the ancestral home, only to hug her unconscious and lock her in her old childhood prison. When Vanya wakes up, Klaus and Diego attempt to talk Luther out of holding their sister captive. Diego argues (in a moment that shows supreme growth, and I confess, made me beam with pride for that little rage monster) that if Vanya DOES have terrible powers, she needs their help, not to be isolated, and Klaus agrees, wrestling with his own burgeoning abilities. It’s not until Allison finds them and demands via written note that he release Vanya, that we understand the full extent of Luther’s actions. He doesn’t say “she doesn’t know how to control it.” He says “I can’t do that – she hurt you.” Luther’s imprisonment of Vanya is not an act of prevention. It’s an act of punishment.

The Family That Addicts Together….

Perhaps the pair that we have least come to expect to see parallels between at this juncture are Five and Klaus. And I say that as someone whose unflagging devotion to both characters teeters on mania – they are fictional, Kell, let’s be reasonable. No. I refuse. BUT. Personality wise, we’re not dealing with a great quantity of overlap in their venn diagrams. Klaus is compassionate in an immediate, real world capacity. Five has the compassion of a non-interventionist god – it is far easier for him to conceive of a monolithic billions of people dying than it is to actually reconcile the reality of his individual brothers and sisters suffering. He is, arguably, too big picture to catch important details, like, for example, Vanya’s suffering. Klaus, a reforming addict in action, recognizes compulsive behavior in his brother and tells him that he is an apocalypse addict.

Having found the very dead Harold Jenkins, they believe the apocalypse has been subverted, though Five argues it’s too simple. Klaus points out – correctly – that without this mission (which in Five’s defense, has been his motivation for something like 40 years at this juncture), Five doesn’t know who he is or what he’s doing. A reality that Klaus can site and name because he is struggling deeply with his desire to stay sober. Luckily, he has Ben on his side, quite literally punching the drugs out of his mouth. Addiction had stymied Klaus’s ability to conjure. Clean, not only can he speak to the dead, he can give them corporeal presence.

And all of these realizations come in the nick of time, as a trapped Vanya channels her rage and her past selves into one nuclear blast that knocks the door of her cage to kingdom come. She’s out and she’s pissed, and absolutely ready to usher in the finale.

Because I can think of no clean and direct segue but I do not want another review to go by without directly acknowledging it, I’m just going to throw this out here in a moment of unabashed delight and miscellany: Klaus’s outfit through this final stretch is astounding. It’s just great. He is wearing a pair of laceup pants and a tie-dye crop top. To those two ecstatic elements, I can afford no significance, however, all praise to the subtle touch of Klaus still wearing his fatigue jacket. It’s a small gesture, a nod to what he has been through and what we know he has survived. I know we’re getting dangerously close to these reviews just being me fan-girling about Klaus all the time, but…whoa be upon those who under-estimate that delicious elf. He’s about to be a force. And guys. We’re going to talk about it.