Right then, the featured $0.99 movie this week is the Mila Kunis/Kate McKinnon starring, fish out of water comedy The Spy Who Dumped Me. This film has a great cast, and a fun premise, and really should’ve been a lot better than it was. I really don’t want to tell anybody to skip it, just be prepared to sit through a frustratingly formulaic story bolstered by occasional flourishes of hilarity if you do. Or, you can skip the big budget bombast of that very Hollywood offering in favor of one of 2018’s largely unheralded gems. So …

This week, a grieving father desperately tries to hold himself together as his life falls apart in Jim Cummings’ Thunder Road.

Amidst a bitter divorce/custody battle, and grieving the recent loss of his mother, Officer Jim Arnaud’s life has hit what most would consider a formidable rough patch. To put it mildly, he’s just not handling matters particularly well. As his life spins further and further out of control, Jim desperately clings to his last pangs of dignity in hopes of finding a way through the strife. Welcome to the heartbreaking, heart lifting, and often hilarious world of Thunder Road. 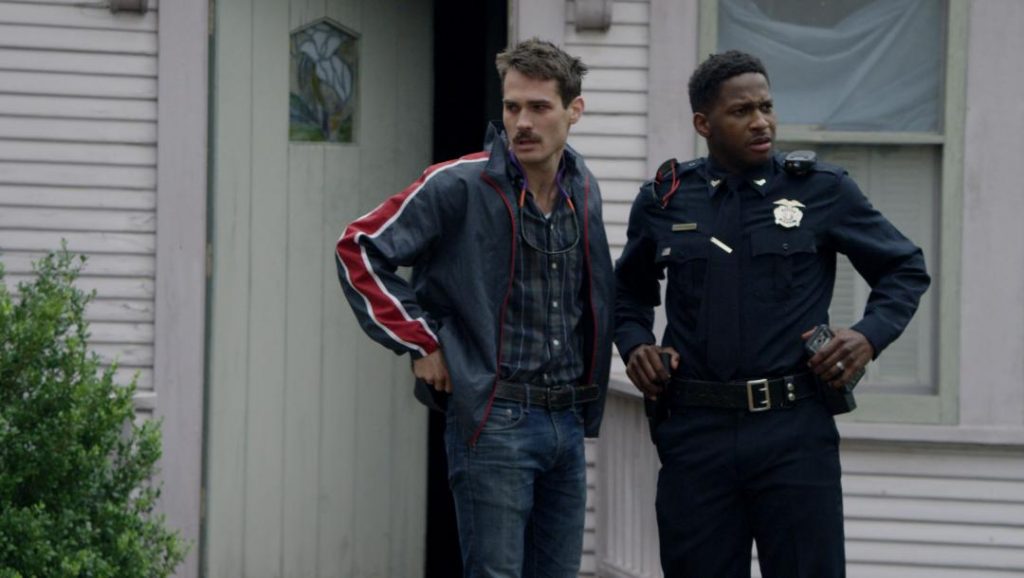 It’s a Lot for Some People

I always try to instill in cineastes clamoring to discover up and coming directors that if they really want to find the next wave of great filmmakers, they should start by watching short films, ’cause that’s where the magic is taking shape for that next wave. To that point, if you’d been paying attention to the short film world a couple years back, Jim Cummings would’ve certainly been on your radar. It was 2016, after all, when the director showcased his sublimely awkward, emotionally resonant, and meticulously executed one-shot short Thunder Road at the Sundance Film Festival. He happened to take home the fest’s top prize in the shorts category that year … and it was then that the seeds of a feature-length adaptation of Thunder Road were first sewn.

Two years later, Cummings finally unleashed the expanded version of Thunder Road on the public, and somehow delivered a film even more awkward, resonant, and engaging as the short which spawned it. If you’ve experienced Cummings’ cringe-inducing mini masterpiece, you know just how impressive a feat that is. But as patently uncomfortable as the shorter version of Thunder Road is, Cummings outdoes even himself with the feature, pushing his characters, and the film’s cagey narrative so far past the comfort zone of most viewers, that many may find themselves unable to sit through the emotional carnage unfolding onscreen.

That Thunder Road is often quite difficult to watch, is an inescapable fact, but also sort of the point. Even as Cummings pushes his narrative into seriously uncomfortable places (both spiritually and physically), he always manages to levy the humanity of the moment with the slightest touch of humor, thus preventing the film from being overpowered by the pain, and grief, and soul crushing uncertainty simmering under every single frame. From one scene to the next, you may not always know whether you should be laughing, or crying, or cringing from one moment to the next, but Cummings has crafted his screenplay so skillfully that it feels like he’s looking for all of those reactions simultaneously. That the film actually earns those simultaneous reactions is proof that Cummings is a filmmaker of rare humility and humanity.

And make no mistake, you will react to Thunder Road on a visceral level, not just because its central themes are very much of the universal sort, but because the film’s characters are rendered so vividly down to earth, and their stories so tenderly observed that it’s simply impossible not to see parts of yourself in them. As for Cummings – who also wrote, directed, and edited Thunder Road – casting himself in the role of the overwrought Officer Arnaud ensures that the film’s narrative and emotional success lay squarely on his own shoulders.

Perhaps sensing Thunder Road as his first true moment in the cinematic sun, Cummings comes through with a heartbreaking, often breathtaking performance that finds him running a legit emotional gauntlet from the film’s potent opening moments to its deeply rewarding finale. The moments between find Cummings’ wild eyes and perpetually contorted face conveying untold depths of humanity and humility barely contained beneath his exterior of aloofness. If you take nothing else away from Thunder Road, know that Cummings is very much a performer to watch. You should also note that what he does in front of the camera would mean nothing if he wasn’t equally talented behind it, and that Thunder Road – in all its ungainly glory – is just the beginning.

You bet. In spite of its third act hiccups, Thunder Road is a silly, soulful, and occasionally cringingly uncomfortable study of an average man on the brink of emotional collapse. One that should bring some serious feels to even the most frigid of hearts. It also happens to feature a comedic/dramatic performance from Cummings that should go down as one of the greats from the past decade or so. If that’s not worth a buck to you, well, I really don’t know what is.

The Penultimate Episode of ‘The Umbrella Academy’: Let’s Talk About Revenge and Klaus. Always Klaus.