Home Entertainment ‘The Handmaid’s Tale’ Continues: For a True Gilead Believer, Betrayal Is a Hard Pill to Swallow
Entertainment

‘The Handmaid’s Tale’ Continues: For a True Gilead Believer, Betrayal Is a Hard Pill to Swallow 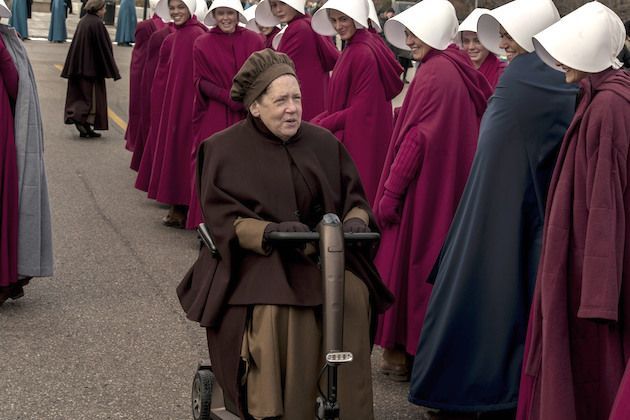 I usually don’t watch the “Inside the Episode” segments that Hulu produces for each installment of The Handmaid’s Tale, but I’ll admit that the final scene of “God Bless the Child” confused me a little (more on that later), and I wanted to see if the creative minds behind it could provide some insight. They didn’t bring it up, but they did shed some light on another season three development that’s been very interesting thus far, and so I have to give them credit for a lot of what follows.

Aunt Lydia is one of the most fascinating characters on television today. We’ve discussed her before, but it’s worth noting again that, even though she’s one of the cruelest figures in Gilead, and even though she’s responsible for some of the most horrific things that have been done to the handmaids, her motivation is very different from that of the average commander or wife. While the laws of Gilead are based on religious dogma, the commanders seem to enforce them arbitrarily out of a desire for power more than anything else. They may want to save humanity and usher in a more perfect society, but they don’t really seem to care who gets hurt in the process.

On the other hand (and this may be true for all the aunts; we’ve just never spent any real time with any of the others), Aunt Lydia is not only a genuine believer in Gilead, but she seems to actually care about the handmaids she supervises. That may seem like a stupid thing to say since we’ve seen her burn them, hit them, and emotionally abuse them (among other things), but I would argue that she does all these things because she believes she’s doing them for their own good. She’s like a parent who uses abusive disciplinary tactics because she thinks it’s best. And that doesn’t justify abuse, but it does help explain it.

Because you have to remember that, in the eyes of Gilead, a handmaid is a “fallen” woman. June dated a married man. Emily was a lesbian. And the others have done “sinful” things as well. Despite their sinfulness, they can redeem themselves by bearing children for Gilead couples who can’t conceive on their own, but that means they have to be, as Aunt Lydia repeatedly reminds them, “good girls.” Compliant. Silent. Obedient. In her mind, she’s helping them in that redemptive process, and they should be thanking her.

At the end of last season, we saw Emily attack Aunt Lydia, and we weren’t sure we’d see our favorite aunt again after that. She’s recovered physically, but it’s obvious things aren’t quite right for her from a mental and emotional perspective. Her mood shifts drastically with no warning, and she lashes out violently—first at June, and now at poor Janine, who is trying her best to stay on Aunt Lydia’s good side but who just can’t bear to be apart from her baby. When Janine steps over the line and begs to be reposted to the Putnam house, Aunt Lydia loses it completely.

I really thought it was just the fact that, like many who suffer life-threatening injuries, Aunt Lydia was just feeling the emotional effects of the accident. But it’s more than that. As showrunner Bruce Miller points out, Emily—one of Aunt Lydia’s “girls”—literally stabs her in the back. And Aunt Lydia doesn’t know how to handle that. To her, it’s an act of betrayal that makes absolutely no sense. And since Emily’s not around to punish, she’s taking it out on any handmaid within reach. Now that she’s made a public display of her anger, I’ll be curious to see if she suffers any consequences. Since Janine’s just a handmaid, and since she was way out of line, I doubt it.

Speaking of Emily, we spend a lot of time with her as well as she reconnects with Sylvia and Oliver. While I think we all wanted the romantic homecoming moment, I can appreciate the fact that, as Sylvia points out, things are downright awkward now. Emily’s been gone for quite a while, and that separation’s been tough for those who made it to safety as well as for those left behind. We saw a major emphasis on this dynamic a couple of episodes ago, and I’m glad that focus continues. Gilead isn’t just destroying people—it’s destroying families as well.

As for that last scene, I’m still not sure what to make of it. On the one hand, it’s fantastic that June now has visual verification that both Luke and Nichole are together and safe. But why would she give up Luke’s identity? Is it because she knows they’re in Canada and Gilead can’t touch them? After what happened last season, we can be pretty sure Canada won’t extradite Luke, but I’d still be afraid Waterford would try to find him—if for no other reason than to bring Nichole back. Maybe I’m missing something. Or maybe we just need to keep watching.

‘Archer: 1999’ Finally Answers the All-Important Question: Are Eggs Really Good for You?