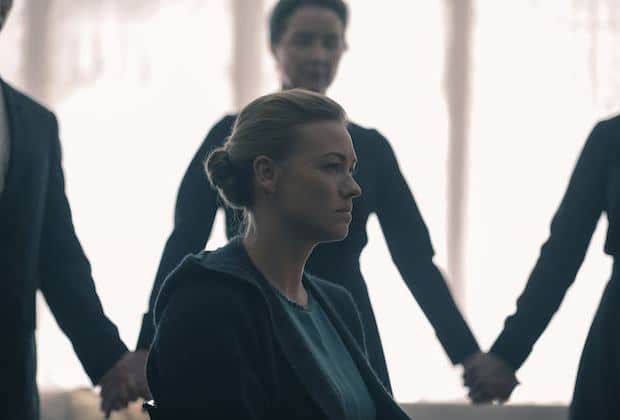 History is filled with evil men who have tried to justify the atrocities they commit by claiming, and sometimes even sincerely believing, that the suffering they cause is necessary to bring about positive change. While some autocrats and tyrants are simply men who thirst for power and nothing more, there have always been those willing to imprison, torture, and kill in the name of making the world a better place. Maybe they regret the pain they cause, or maybe they actually enjoy it. Or maybe they just don’t care. Either way, they would tell you they’re simply doing what needs to be done for the greater good.

Commander Joseph Lawrence has been quite the enigma since being introduced toward the end of last season. On the one hand, he was instrumental in helping Emily escape, and it seemed as though he would have helped June get to safety as well. And we know he’s not a fan of the handmaid “ceremony” that all commanders are supposed to conduct once a month. After he took June in, we could only assume that he might become an ally of sorts.

But even with all of that, there’s always been this sense that we weren’t getting the entire picture. His wife told Emily last season that he’s the one behind the colonies, and while Eleanor Lawrence may not be the most reliable source (has he driven the poor woman mad?), Fred Waterford has now confirmed that Lawrence is the architect of many of Gilead’s horrific policies and methods. Plus, his demeanor with Emily last season made it difficult to figure out exactly what he was thinking. Can he really be trusted?

Now we see his true colors. Unlike Waterford, Lawrence isn’t a religious zealot (to be fair, neither is Waterford, but he at least pretends to be when it suits his purpose). Lawrence is all about what’s good for Gilead, which is why he’s crafted the policies and put the institutions in place that he thinks will save humanity. It’s also why he’s not above bending those very rules when he sees value in it. For him, it’s all about usefulness (hence the episode’s title), and even a lowly, sinful woman can be saved from death or exile if she can be of service in some way. Helping Emily wasn’t an act of kindness—it was for the greater good.

The problem with this philosophy, of course, is that Lawrence and the other commanders get to decide who’s useful and who isn’t. And even if you’re a woman, and you happen to be deemed worthy of something other than death or the colonies because you have a particular talent, you’re still constantly reminded that, no matter how far you go or how much you’re allowed to accomplish, you’re still just a woman. And as far as Lawrence and the other men in power are concerned, you’ll never be their equal.

Of course, maybe June’s right. Maybe, on some deep, hidden level, Lawrence knows that the institutions he’s created are evil. And maybe helping a handmaid get to safety or looking the other way as the Marthas run a resistance network out of his home provides just enough assuagement of guilt to help him sleep at night. Maybe he really wanted to save all of the Chicago women but could only save five. Maybe he’s not so bad after all.

Or maybe he’s just a cold, calculating psychopath who feels nothing and makes every decision based solely on its relative benefit to Gilead. Well, at least June’s not being assaulted on a regular basis anymore. That’s something, at least.

Serena Joy’s not being abused anymore, either–but that’s only because she’s finally left her sorry excuse for a husband. The show has done a really nice job over the last couple of seasons of humanizing Serena and showing us that even though she’s been downright nasty to June (which is inexcusable), she’s been a victim herself. A commander’s wife may be at the top of the female food chain, but that’s really not saying much since they still have to obey their husbands no matter how insanely unreasonable he is. She’s a well-educated, well-spoken, intelligent woman who’s married to a feckless moron, and even though it’s the life she chose, it’s been tough to watch how she’s been treated.

Unfortunately, even though she’s finally away from Fred, she’s still trapped in a society where a woman’s value is determined by her husband and her relationship to him. Her mother is working hard to shame her into running back to him, and things get so tough that she finally walks into the water, apparently with every intention of ending it all.

But then she stops, turns around, and walks back to shore. Because she and June and the others realize that they can’t give up. They have to fight. And they can do it by using the massive amounts of inner strength they have that the men refuse to acknowledge. The men may hold all the leadership positions and call all the shots, but they’re about to find out who has the real power in Gilead. And it’s not them.