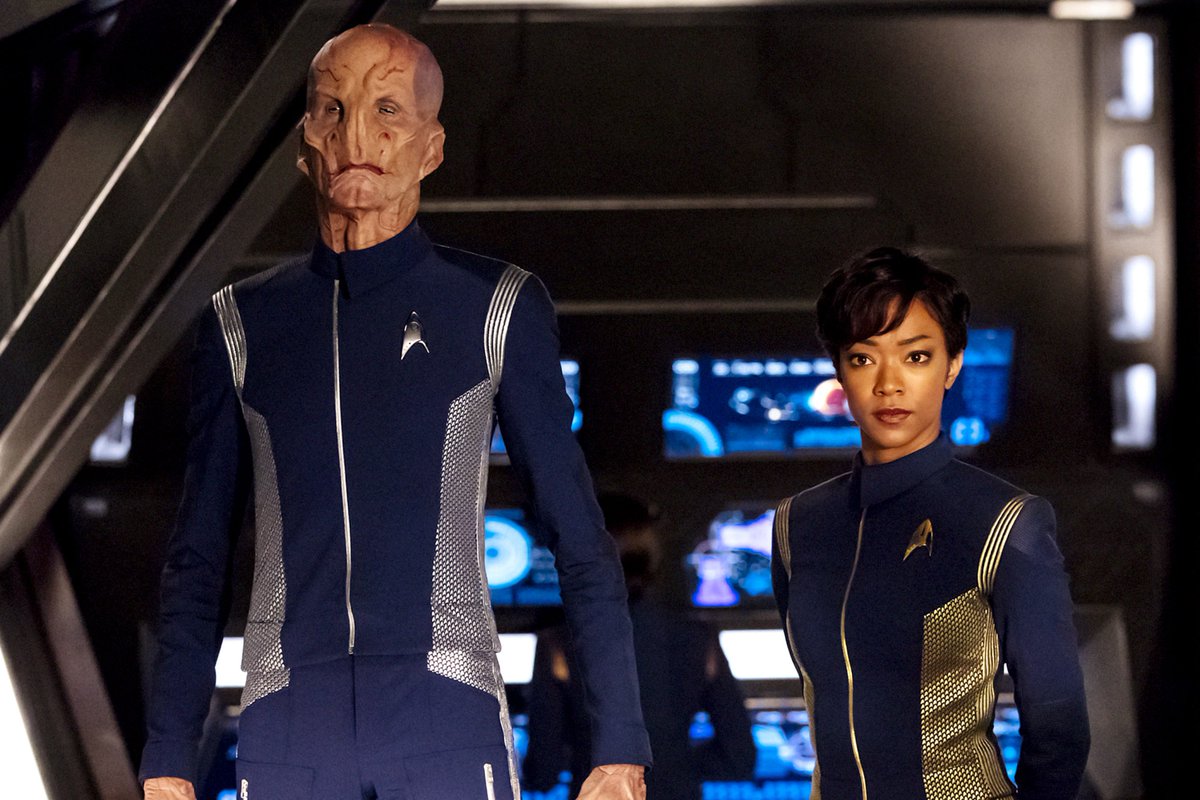 This post contains spoilers from the first four episodes of Star Trek: Discovery and Season 7 of The Walking Dead.

When Sonequa Martin-Green was introduced in the Theater at Madison Square Garden for New York Comic Con 2016 during the panel for The Walking Dead, she received a rousing ovation. Almost one year later to the day she was introduced on the same stage for NYCC 2017 and the noise was deafening. This time she was the lead guest on the panel for Star Trek: Discovery. While the show is still new, only three episodes had been released at this point, the crowd was large and vocally supportive of the show during the panel on Saturday afternoon.

It has been quite a year professionally for Martin-Green. Her character, Sasha Williams, died in the season 7 finale of The Walking Dead. But months before that, it was made public that Martin-Green had been cast as the lead in the newest Star Trek series. That series, Discovery takes place ten years before Star Trek: The Original Series. Martin-Green’s character, Michael Burnham is a disgraced Starfleet officer, who disobeyed orders in an attempt to defeat the enemy Klingons. Six months later, the Federation is in a full-scale war with the united Klingon houses. Burnham is recruited by the mysterious Captain Lorca (Jason Isaacs) of the USS Discovery to help develop new technology that could win the war.

Most of the major players for the series were present at NYCC. Cast members Doug Jones, Jason Isaacs, Mary Chieffo, Shazad Latif, Mary Wiseman, Wilson Cruz, and Anthony Rapp joined Martin-Green. Executive producers, Akiva Goldsman, Heather Kadin, Alex Kurtzman, Gretchen Berg, and Aaron Harberts also took part. The producers did provide some interesting information, but as with many Comic-Con panels, they also played the role of chaperone with many of the cast members looking uncertainly in their direction before divulging any information.

Dr. Mae Jemison, a retired NASA astronaut and Star Trek superfan moderated the panel. She was the first African-American woman to travel to space. Martin-Green broke a television color barrier with Discovery by being the first African-American woman to play the lead on a Star Trek series. In fact, the cast and producers explained that the series is full of firsts. Anthony Rapp and Wilson Cruz play the first openly gay couple on all of the Star Trek shows.

As this new series looks to continue the diversity in casting and character development of its predecessors, it is also pushing the innovation in storytelling. At the panel, Goldsman spoke about how this is the first wholly serialized Trek series. He used an example from the Trek canon to explain why. When Captain Kirk’s love interest, Edith Keeler, dies in the episode “The City on the Edge of Forever,” the Captain would have needed time to process such a loss. But the following episodes never addressed it. In Discovery, each episode is connected to the next. There are no stand-alone adventures.

While the name of the ship is USS Discovery, it was said that the title of the show has multiple meanings. Martin-Green explained that the characters are on a “path of self-discovery” as well. Burnham feels responsible for the death of her previous captain, Philippa Georgiou (Michelle Yeoh), who was killed in the second episode of the series. But despite such a short tenure, Yeoh made quite an impact with fans. The first fan question from the audience had a woman wearing a bucket hat ask if fans would see more of Georgiou. The panel quickly figured out that this was actually Yeoh in disguise. What followed was the second largest ovation of the afternoon. She joined the group and told them she had come back to “haunt” them. It was announced that we will be seeing more of the character though. There was a brief hologram of her on Sunday’s episode, the day after the panel. We also learned Sunday that the Klingons ate her body. So I don’t see a miraculous recovery as an option.

The show has seen its share of controversy since it was announced. Some of those issues came up at the panel when fans asked questions. Producers said we would be seeing more from the Klingon point of view in upcoming episodes. Their main platform for fighting the Federation is independence, a concept that shouldn’t be considered all that villainous. They added that there was an effort to make the Klingons realistic in terms of their goals and not one-dimensional villains. Also, the decision to air the series on CBS All Access, a subscription platform only available outside of a normal cable package, has been a big talking point among fans. Jason Isaacs fielded that question by pointing out that the actors are less interested in the platform than the stories.

Before Star Trek: Discovery aired, fans had a lot of questions and concerns about the franchise’s return to television. Now that a few episodes have aired, we’ve seen positive reviews and the fans on hand at NYCC sure seemed satisfied with the results. With all the talk at the panel about the science of the future, I would like to know about the television options. Is CBS All Access still a thing in the 23rd century and if so, is everyone still complaining about it?