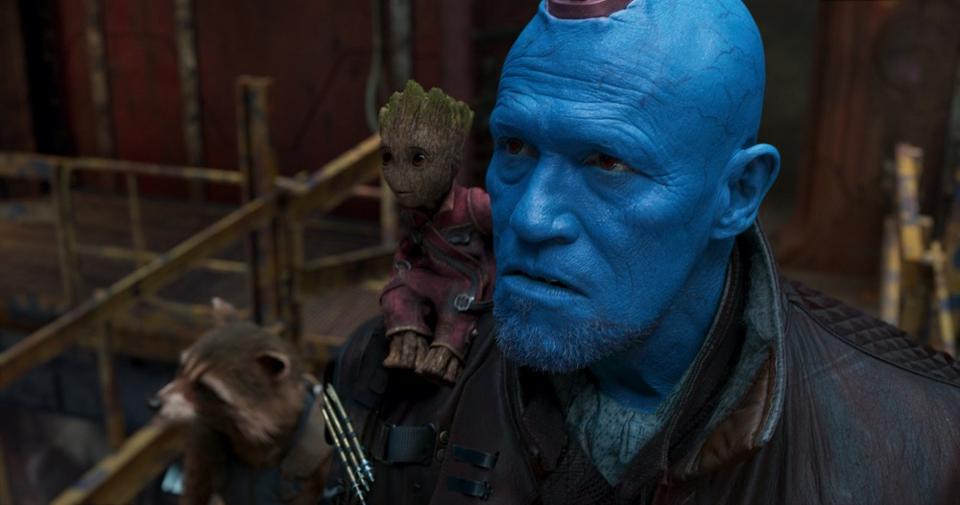 (This post contains spoilers from Guardians of the Galaxy Vol. 2 and The Walking Dead season 3.)

Michael Rooker seems like a good guy. But there’s no denying that he has the look and gravelly voice of a villain. That combination presents a perfect fit for Rooker’s two most iconic roles of recent years. As Merle Dixon on The Walking Dead, he played a cruel racist who didn’t mind dishing out some torture. Then on Guardians of the Galaxy Vol. 1 and 2, he played Yondu, who was a proud criminal more concerned with a big pay-day than the well-being of others. Yet both of these characters finished their story arcs with heartbreaking moments of sacrifice. Now they, like Rooker, are fan favorites.

So when the actor turned up on New York Comic Con’s main stage Thursday afternoon, fans let their appreciation be known. A large crowd was on hand as The Wall Street Journal’s Walking Dead columnist, Paul Vigna moderated the spotlight panel. But after only a few questions, Rooker decided to take a less formal approach. He grabbed his microphone, leaped off the stage and spent most of the hour panel engaged in a man on the street style question and answer session. The time also doubled as a frantic stand-up comedy routine as virtually all of his responses were met with laughter from the fans on hand.

Rooker used the hectic nature of the improvised format to avoid any questions he didn’t want to answer. When he was asked what’s next for him, he replied by saying he didn’t know and then asked the fan what they thought should be next. But there were quite a few insightful glimpses into the hugely successful projects he has worked on. He admitted that the now infamous “I’m Mary Poppins, ya’ll” line from Guardians 2 wasn’t adlibbed like he has said in the past. He joked that he lied to make himself look better. He also gave a quick, one word answer when asked if he is still under contract with Marvel. “No.” So that’s that. Apparently there aren’t any plans for Yondu flashbacks in Avengers: Infinity War or Guardians 3. That could change over time of course. On Friday at NYCC, Rooker made an appearance at the Marvel booth on the show floor to give away some t-shirts and spend a few minutes chatting with fans. Under contract or not, he surely has a legacy with the brand.

While his performance as Yondu is still fresh in the minds of fans, the panel acknowledged his memorable turn on The Walking Dead as well. He told the story of how his casting almost didn’t happen due to some confusion with the producers. Apparently, years prior he had pulled out of a project and an unnamed producer still hadn’t forgiven him for it. But a letter from Rooker explaining the situation cleared things up and allowed for the version of Merle we know. “Still buddies” with The Walking Dead cast, Rooker turns up fairly regularly as a guest on The Walking Dead post-show The Talking Dead. He will even reprise his role in the upcoming Robot Chicken/The Walking Dead special. You can see a short clip of him singing in the trailer. So this is clearly still an important role to the actor like it is to the fans.

As a character actor for decades before the Comic Con crowd became acquainted, Rooker’s filmography is extensive. Credits include Cliffhanger, Days of Thunder, Jumper and many one-off appearances on different television shows. Rooker called his recent successes with Merle and Yondu as a normal step in any career that has peaks and valleys. Working regularly since 1986, it has been quite the career. He sure seems to be enjoying this current peak.

He gave many of the silly fan questions as much time as the more serious ones. The audience learned that pepperoni pizza gives the actor heartburn. Also at one point he struggled for several seconds attempting to remember his dog’s name. He also referred to his “costar,” Rocket as “the little rat.” I’ll admit it was a bit disappointing that James Gunn didn’t answer when Rooker tried to call him in the middle of the panel. But the Guardians director sure had an interesting voicemail waiting for him when he checked his phone.

Amid the madness, Michael Rooker’s main point was that he doesn’t usually approach his characters by labeling them good or bad. Without going into specifics, he admitted that he has played characters that are completely evil. But for the most part, that isn’t the case.  They are some shade of grey. With both Merle and Yondu, these not so good guys developed into heroes that bring some of geekdom’s favorite leading men to tears. (See Reedus, Norman and Pratt, Chris). Luckily for us, Merle and Yondu will live on through Blu-Ray, Netflix, and Rooker’s appearances at various comic cons.