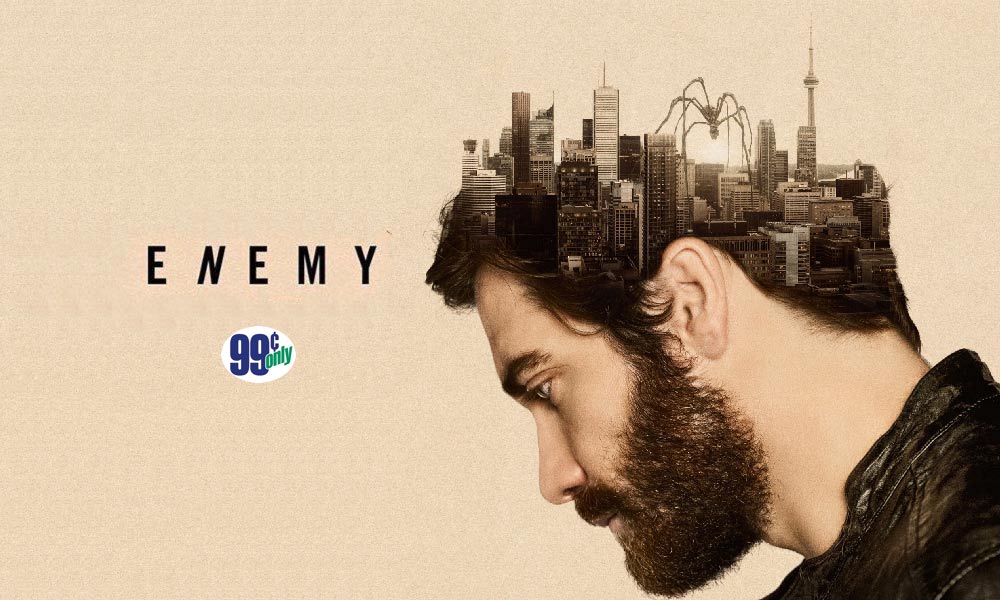 So, the featured $0.99 movie is a little foodie doc called Jeremiah Tower: The Last Magnificent. It tells the tale of famed chef Jeremiah Tower, a highly influential and highly contentious figure in American gastronomy. The film was produced by Anthony Bourdain. And the trailer actually looks pretty interesting. What can I say except I just wasn’t feeling a documentary this week. Especially when one of my favorite flicks from the past decade was sitting in the ‘Movies You Might Have Missed’ section at iTunes Movies. So …

The week, Jake Gyllenhaal meets his doppelgänger and has a breakdown in the dread-fueled drama Enemy.

You Never Know How Your Day Is Gonna Turn Out

In the great northern metropolis of Toronto, Adam Bell (Jake Gyllenhaal) leads a quiet, somber existence. He teaches history at a local university. He spends time with his girlfriend Mary (Melanie Laurent). And he stays up late watching b-movies on old VHS tapes. But Adam’s life takes an unexpected turn when he spots Daniel St. Claire in one of those movies. A struggling actor, St. Claire (also played by Gyllenhaal) is Adam’s doppelgänger in every way, right down to his shaggy beard and scar. As Adam searches for more information on his theatrical counterpart, obsession soon takes hold and the pair’s lives become entangled in a dangerous web of their own making. One that they may not find their way out of. Welcome to the weird and wonderful world of Denis Villeneuve’s existential drama, Enemy.

Chaos Is Order Yet Undeciphered

Understand that when I use the word ‘web’ to describe Enemy‘s narrative, it’s not just a clever way of describing the film’s complexities. Denis Villeneuve’s haunting drama is structured more as a literal web of seemingly mundane mysteries than a straightforward narrative. But each of those mysteries are connected by complex questions about identity, desire, fate, and existence. Not to mention the nature of chaos and the nature of self.

If that sounds heavy, well, it is. I have no intention of telling you what Enemy is about in this review … mostly because I’m not sure I could. But also because Enemy is the sort of film every viewer will take something different from. That being said, I can tell you the film definitely has a beginning and it sort of has an ending. The moments in between are filled with nightmarish imagery (spiders do figure prominently), heady themes, and a near oppressive sense of dread. And yes, whatever baggage you bring to that mix will directly influence how much the film affects you.

Confused? Good. That’s just the mindset you’ll need before entering the world of Enemy. That world was spawned from the mind of subversive Portuguese writer Jose Saramago, whose novel The Double inspired this film. If you know anything about Saramago then you know that allegorical webs are sort of his specialty … and The Double may well be his masterwork. Enemy may go down as Denis Villeneuve’s (Arrival, Blade Runner 2049) masterwork as well. The visionary director brings Saramago’s vision to terrifying life crafting a film thick with atmosphere and possessed of a mirthful/menacing energy reminiscent of David Lynch’s best work. Somehow Villeneuve’s film also works as both a metaphorical and literal interpretation of the damning alienation rampant in modern society.

I’m still not certain how Villeneuve & Co. pull it off, but those anguished themes bleed through every ominous moment of Enemy. They’re bolstered by the hazy, burned-out photography of Nicolas Bolduc and the brooding music of Danny Bensi & Saunder Jurriaans. But make no mistake, they’re held together by the captivating performance of the actor at the center of the madness. To his credit, Gyllenhaal goes all in with the madness, probing an inner darkness unseen in his prior work and delivering a performance – two performances, in fact – that prove as empathetic as they are alienating and as soulful as they are soulless. He draws you in with his big, sad eyes and pulls you kicking and screaming through a nightmare world unlike anything you’ve ever seen. It’s a world that begins in a moment of heightened terror and ends in a moment of shocking ambiguity. One that thrills as often as it frightens. And as long as you can keep your eyes and your mind open to it, Enemy will likely stick with you for the rest of your days.

Didn’t I mention that Enemy is one of my favorite films of the past decade? ‘Cause it is. It’s also an extremely challenging piece of work. One that will certainly not suit all tastes. If you’re feeling adventurous, you will not get more bang for your buck this week than by dropping it on Enemy. For the less adventurous of you, well, I implore you to be brave, buy a ticket for Enemy and take one of the wildest rides of your life. You might end up hating this movie, but it’ll be a cinematic experience that you will never forget. That’s gotta be worth a buck, right?

From ‘Guardians of the Galaxy’ to ‘Mary Poppins’: Michael Rooker Addresses his Future with Marvel During Spotlight Panel at NYCC