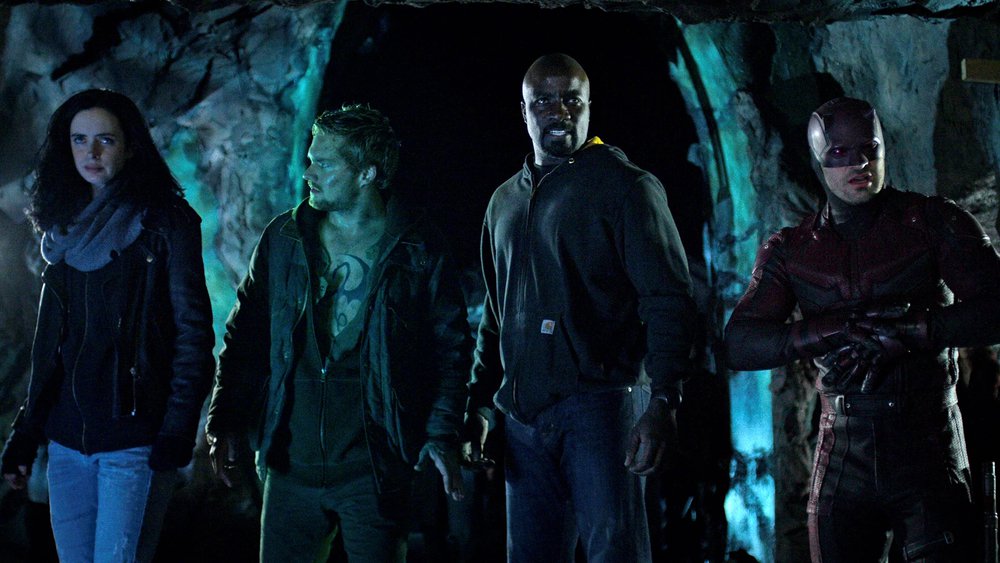 It was an action-packed finale for The Defenders. Explosions, sacrifices, and Danny Rand looking confused and angry. Everything you would expect from such an episode. We finally learned what the Hand were trying to get to beneath Midland Circle. They are somehow harvesting the dragon bones we saw at the end of the last episode and turning them into “the substance.” I’m curious who discovered that connection. Some weirdo monk wondered what dragon bone would taste like and then he just happened to live forever? It’s all the rage in Brooklyn. You can get a dragon bone smoothie at Jamba Juice now. Here’s our recap of the appropriately titled episode, “The Defenders.”

Luke takes a few more minutes of arguing before he agrees the best course of action is to blow up the building and kill the members of the Hand inside of it. Down in the dragon cave, Gao explains that dragons were real, but now these bones are the last of them. Apparently once they are removed, the foundation of the city will crumble. She doesn’t expand much to tell us why that is, but we’ll take Madame Gao’s word for it. She’s reliable in an evil unreliable sort of way.

While Daredevil, Jessica, and Luke are off to find Danny in the dragon pit, Colleen and Claire are supposed to go and plant the explosives the way the architect, John Raymond, laid out on his blueprints. Colleen isn’t too happy about staying behind from the big fight. By this point, Misty and the police have realized the explosives are gone from the station. So they’re racing to get in the building as well. As Colleen and Claire are setting the charges, Bakuto turns up. It had to be him of course. This time Colleen and Bakuto match up much better than their previous skirmish. They battle it out with swords, Bakuto always a half step quicker.

Downstairs, Danny operates out of the shadows taking down Hand operatives one by one. They’ve inexplicably left him there unguarded and alive. Gao approaches and gets him all jazzed up by telling the story of the first time she saw him. He was a kid trying to pull away from his mother as they crossed the street. Murakami grabs Danny from behind just as Daredevil, Jessica, and Luke descend in the hidden elevator they found. The Hand gathers at the bottom, but the three have a plan. At first it appears that Jessica is the only passenger. She tells Elektra and the others that she doesn’t care what they’re up to and just wants the fighting to stop. Then Matt and Luke leap from the top of the elevator and catch the Hand with their guard down. The battle begins.

There’s an awesome 360 degree shot of the Defenders taking down their enemies. Danny lights up the Iron Fist giving the edge to the good guys. He even launches Madame Gao across the room. It’s a great few minutes of varying styles of fight choreography. It’s unclear where Elektra is hiding during all of this, but once she rejoins the fray, she takes control of all four heroes.

As Colleen and Bakuto continue their back and forth, Claire has to deal with some Hand thugs that come through. Misty also comes to help just in time. She puts a few bullets in Bakuto, but that doesn’t slow him down. All three women go after him. As he’s about to kill Claire, Misty reaches in and swiftly gets her arm cut off. As he’s looking that way, two swings from Colleen’s katana removes Bakuto’s head from his shoulders. Her long-time mentor is finally dead. I wonder how much dragon bone juice it would take to reattach a severed head. In one last jerk move, Bakuto’s dead body falls and activates the explosives. They only have ten minutes before the building blows up.

Matt’s super ears hear the countdown beeping while inside the cave. He has the others head back up in the elevator while he deals with Elektra. He claims he’s right behind them, but we’ve seen this move before in superhero stories. Some Hand folk pursue the elevator by climbing the walls next to it. Some close quarters fighting follows. The standout moment is when Danny launches Murakami over the edge into the abyss. Jessica is forced to hold up the entire elevator box after its cable breaks, but she’s up for the challenge.

The Daredevil- Elektra fight goes on for quite some time. Throughout, Matt keeps trying to convince Elektra that she can still be good. Elektra doesn’t admit this, but she talks about being with Matt now in the end like that was always the plan. Across the cave, Murakami has barely survived the fall. He’s impaled on a piece of rebar as Gao approaches. “Gao, what is happening?” “The end.”

Exhausted and barely standing, Elektra apologizes to Matt for all the pain she’s caused him. He admits that they are going to die. “No. This is what living feels like,” says Elektra. As the explosives go off, they kiss one last time and everything collapses around them. Outside, Danny reveals that Matt knew he wasn’t going to make it out. His last words to Danny were, “Protect my city.”

Back in the police station, Jessica enters and is embraced by Trish and Malcolm. Luke holds hands with Claire. Danny and Colleen walk in together. Karen and Foggy stand watching the door. But no one else is there. The supporting cast hasn’t had too much to do in this series, but this is heartbreaking stuff from Karen and Foggy. It’s definitely the emotional peak of the show.

We learn from Trish talking on her radio show that the mysterious happenings have been explained away as the result of unpermitted construction. The implosion of the building has apparently settled the ground below. Foggy then explains to Luke and Claire that the police never filed a report about all the craziness at Midland Circle. In turn, no charges will be filed against them. Foggy also admits that he feels guilty having encouraged Matt to be Daredevil again during the last episode. Claire tells him there was no convincing Matt to do otherwise.

Colleen visits Misty in the hospital asking if she needs a …hand with anything. (Get it, her arm got cut off.) She happens to be staying in a hospital Danny owns. At a cozy little bar, Luke visits Jessica. They’re finally able to have a conversation without the imminent threat of ninja attacks. Luke admits they have to move on from their shaky past together. Back at her apartment, Jessica finds Malcolm fixing the place up. Most prominent is a new Alias Investigations door. We’ll see how long this one lasts.

When Colleen returns to her dojo, Danny is having a hard time dealing with Matt’s sacrifice. But we leave the Iron Fist with him admitting that New York is starting to feel like home. So much so that we see a short scene of him on a rooftop at night ready to defend the city like Matt asked him to.

Karen and Foggy meet in Matt’s church and talk about the slim odds that maybe he somehow survived. Usually we would say that’s unlikely. But Daredevil season three has already been announced. The final scene of this Marvel super-series has Matt regaining consciousness in some sort of church or religious building. A nun looking over him, he has a lot of wounds. But he’s alive. If Matt survived, could the villains have also?

Marvel has been criticized in the past for frequently having characters come back from certain death after attempting to sacrifice themselves for others. (See Groot, Agent Coulson, etc.) But we see it again here in The Defenders. Don’t get me wrong, I’m glad Matt Murdock has lived to fight another day. Overall, this series was a highly successful experiment in shared universe television. I think it’s going to be difficult to go back to the individual character shows. But all four have been renewed and have new seasons in different stages of development. Next up for Marvel and Netflix is a stand-alone series for The Punisher, which comes out later this year. There’s no word if any of The Defenders will appear in that show. But hopefully we get another look at this team in the future. This was fun!