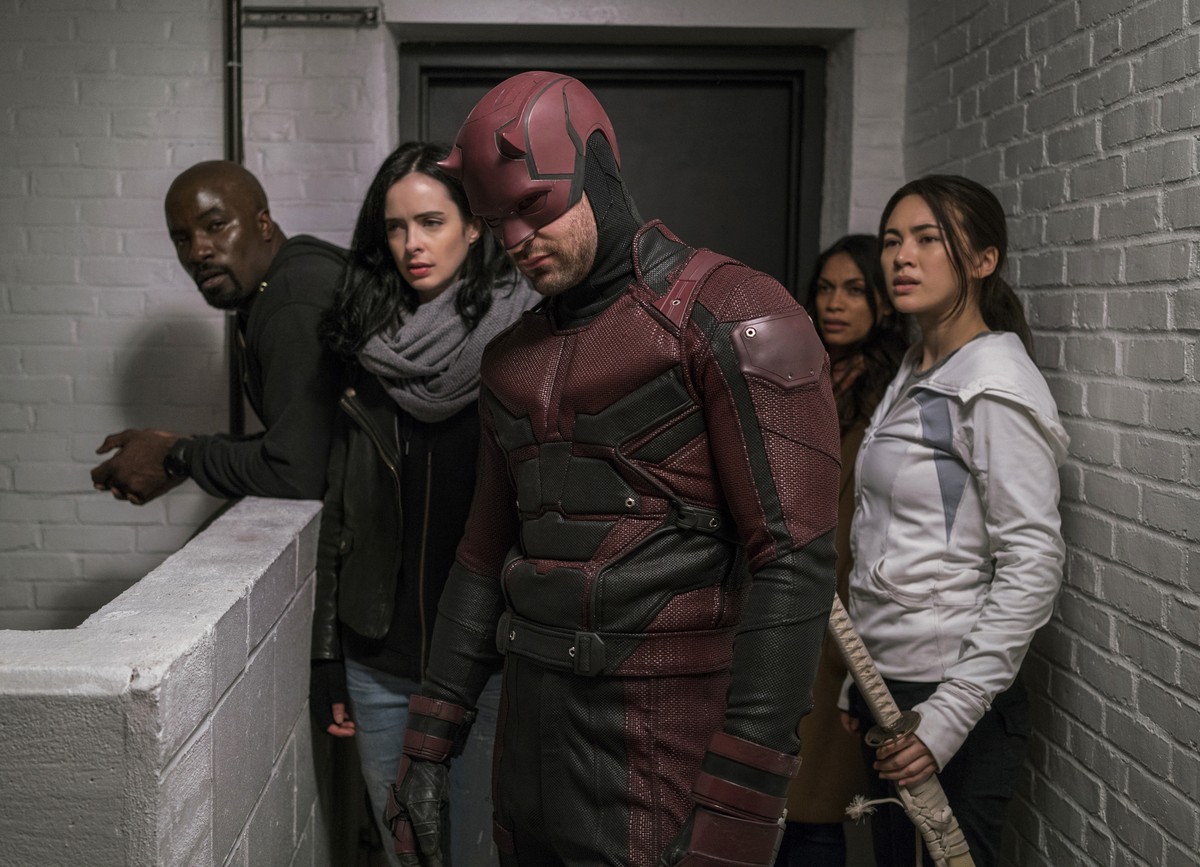 Was that a dragon? The final showdown has begun as our heroes face off against the remaining fingers of the Hand… and Elektra. She’s like a prosthetic finger I guess. But the majority of the seventh episode, “Fish in the Jailhouse,” was building up to that showdown with all the characters in the police station. Oh and we get to see what all the supporting characters have been up to while they’re there. Nothing. No board games, no reading of old Highlights magazines. They’re not even watching any bad television. I suppose what I’m thinking of is a doctor’s office waiting room. I don’t know what waiting in a police station is like. I imagine it’s similar. Here’s our recap.

The opening scene is a flashback with Elektra and Stick discussing Matt. She explains that she couldn’t make Matt a ruthless killer. Stick doesn’t think this means Matt is a good person, it means he’s weak. Back to the current timeline, Stick lies dead. He was impaled by Elektra. Jessica, Luke, and Matt are alive, but unconscious.

One at a time, they wake up in the police precinct. Misty tries to get information from them, but she’s a bit over her head with this one. Naturally the police want some answers since they found them in close proximity to two dead bodies, Stick and Sowande. Matt, Jessica, and Luke all have Danny on their minds. They’re desperate to find him, but first they have to navigate this situation.

At Midland Circle, some dudes carry Alexandra’s body away in a big sheet. It’s not very efficient since they drip blood everywhere on their way out. You would think a company that kills so many people would know a thing or two about cleaning up bloody corpses. Elektra tells Gao, Murakami, and Bakuto that she’s now running the show. It’s a real “I’m the captain now” moment. Gao explains that Alexandra forged relationships with crime lords, corporate partners, politicians, etc. So this coup is going to be difficult to explain. Maybe Elektra didn’t quite think this through. She doesn’t have much experience in the business sector. But she has her mind on one thing, the substance. You know, the vaguely named substance that gives one eternal life. I imagine it tastes like Yoo-Hoo.

The police are starting to lose their patience with Matt, Jessica, and Luke. Matt asks for a minute to speak with them as their lawyer. Before that, Misty talks to Luke and Karen talks to Matt. They both want them to play things by the book. But that’s not their style. Foggy gives Matt a bag that supposedly has a fresh suit and tie in it to help Matt look professional. But that’s a lie! It’s the Daredevil suit. Matt, Jessica, and Luke discuss what’s been going on. Mainly Stick threatening Danny’s life before Elektra took him. It’s a great strategy session, which ends with a hole being punched in the wall and all three escaping their captivity. We don’t see who caused the damage, but I like to imagine it was both Jessica and Luke in a synchronized kind of punch like on “Super Friends.”

The police inexplicably think Matt was kidnapped by the other two during the escape. In an attempt to stay off the streets and away from the police, they take the subway. The scene doesn’t add much to the plot except that it’s moderately funny to see these superheroes taking public transportation. Jessica steals a beer from a guy passed out on the train and proceeds to chug it. Another funny moment happens outside Midland Circle. Jessica and Luke are contemplating the impending fight as Daredevil walks up having just put on his costume. “There it is again,” says Jessica. We’ll give you that. Daredevil’s suit, which is pretty awesome, looks out-of-place next to the hoodies and leather jackets of those around him.

Entering through the parking garage, they’re met by Gao, Murakami, and Bakuto. It’s the throw down I’ve been waiting for, and it delivers. Gao handles both Luke and Jessica by sending various objects, like cinderblocks and cars, at them without touching them. I imagine it’s a chi thing. We’ve seen small glimpses before, but Gao is definitely not the helpless elderly woman she appears to be. Daredevil has his hands full with both Murakami and Bakuto. Colleen shows up and immediately goes after Bakuto. But the Hand vanishes just as the tide turns against them.

Far below the building, Elektra tells Danny the reason he’s there. Another Iron Fist sealed this mysterious door a long time ago. Only another Iron Fist can open it. “Behind that door is the true power of the Hand.” Danny is defiant and brave. But once again, he proves we have to question his intelligence. Elektra says Danny should break free from what his masters wanted for him and be his own person. He doesn’t take that bait. But he does engage Elektra in a fast-paced fight. Then Elektra pushes the right buttons by bringing up the dead elders of Kun-L’un. “You should have heard the way they screamed when I killed them.” Danny summons the Iron Fist and gains a slight advantage. But Elektra redirects one of his punches and has him hit the door with the fist. If the only thing that can open this door and spell doom for the city is the Iron Fist, maybe don’t summon it for a little while. Way to go, Danny.

Misty and Claire roll up right as Daredevil, Jessica, Luke, and Colleen are about to enter the building. Misty agrees to stall the police and Claire joins the group. While on the search for the elevator to get below the building, Colleen reveals that she stole the explosives and the plans for Midland Circle from the evidence room in the police station. She plans to finish the job the architect, John Raymond, started by collapsing the building and stopping the Hand for good. Most of the team are against this plan, but Matt agrees. The only people in the building are them and the Hand. So this would be a chance for success while limiting innocent casualties.

Back downstairs, Danny wakes up from yet another spell of being unconscious. There must be so many undiagnosed concussions on this show. He’s laying among some massive bones. We zoom out to reveal that the bones belong to a dragon. We know dragons exist in this universe from Danny’s talk about defeating one to earn the Iron Fist. But this is still a game changer. The Defenders are the “street level” Marvel heroes. Well now the streets are littered with dragon bones. Only one episode left!