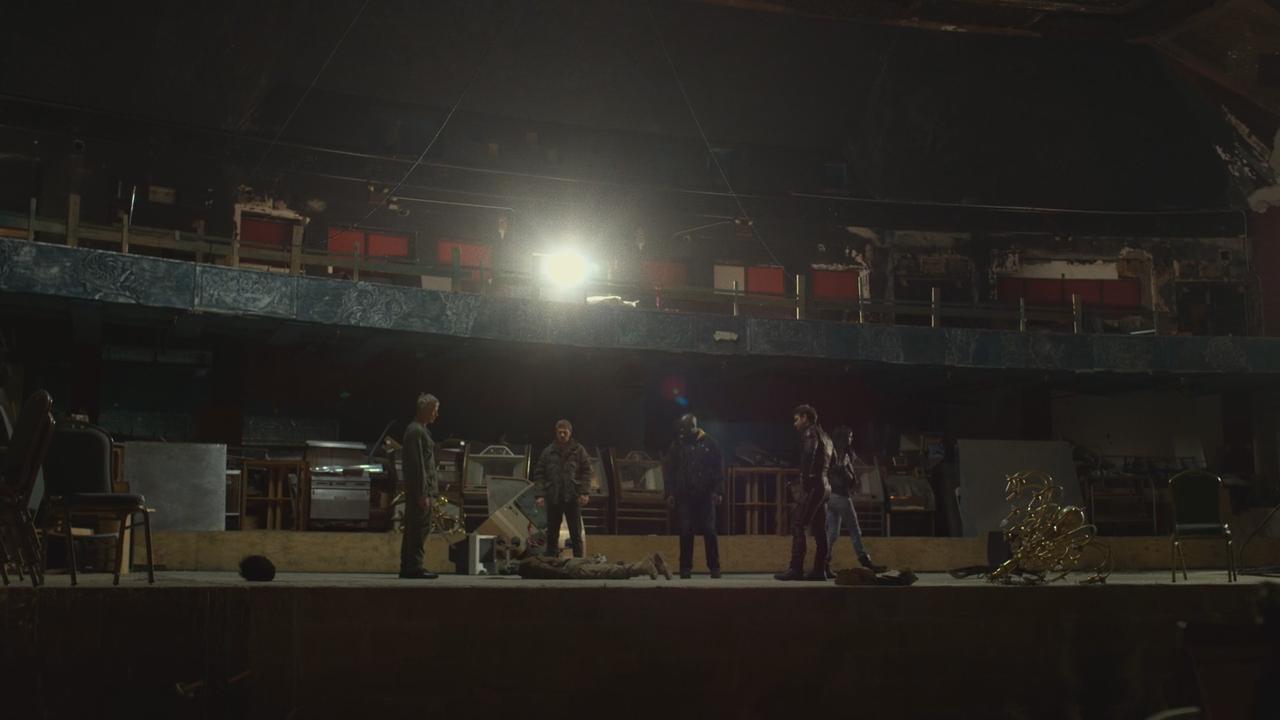 We’re getting very near the end game on The Defenders. The heroes are building bonds, the villains are losing their patience, and all the supporting characters are still off in the police station trying not to get murdered. But there was some pretty significant murder this episode. Here’s our recap of episode 6, “Ashes, Ashes.”

In the dilapidated theater hideout, Stick, Matt, Jessica, Luke, and Danny are chatting while Sowande’s head lies on the floor removed from his body. After learning that the Iron Fist is a key, in addition to being a weapon, there is a debate about what to do with Danny. The talk leans toward getting him out-of-town, hiding him and the like. More than protecting Danny, the concern is what will happen if the Hand does capture him. But Danny isn’t so interested in sitting out the major battle against his mortal enemy. We’ve heard enough about his journey and mission and whatever to know that.

Eventually the back and forth leads to Danny attempting to fight his way past the others. He and Matt have a pretty awesome fight as Jessica and Luke step in from time to time to help Matt. Eventually Danny summons the Iron Fist and punches Luke right in the chest. He’s sent flying across the theater. In fact, everyone is sent flying from the aftershock. Jessica is able to knockout Danny with a punch to quiet the hostilities.

They bring Danny upstairs and tie him to a chair. Discussions among the still conscious lead to the topic of Midland Circle. At this point, there is a room full of superheroes who don’t know what to do next. Matt brings up the giant hole he witnessed at the construction site that is now Midland Circle. Jessica suggests they talk to the architect’s family, who hired her to look into his disappearance. Matt goes with her and Luke stays behind with Stick.

While this main plotline in the theater plays out, a few smaller character moments happen also. Alexandra is attempting to enjoy a nice classical record, but it keeps skipping. #FirstWorldProblems. Elektra has a dream/flashback about being in Matt’s apartment during her life. Remember she’s just hanging out there while Matt’s out. She finds the card from her funeral in Matt’s stuff. At the theater, Stick reveals that the people who Cole and the other Harlem guys were sent to clean up back in the second episode were some of the final living members of the Chaste. Stick is also vague about what he plans to do with Sowande’s body.

Matt and Jessica are off to talk to Mrs. Raymond for any clues about Midland Circle. First, they have a pit stop at Matt’s apartment. He notices the funeral card is missing, but doesn’t say anything to Jessica. He’s still pretty protective of Elektra. At the Raymond’s, only the daughter Lexi is home. Jessica draws a comparison between John Raymond’s attempt to keep his family away from the crime in his life and Matt’s boxer dad. He died attempting to get out of the criminal life. It’s a pretty accurate comparison. But the main point here is that Jessica has done some sleuthing into Matt’s story.

Lexi goes on to talk about how her father slowly stopped sleeping and eating while working on the Midland Circle project. He would sit at the piano, but not play like he used to. On this prompt, Matt asks if he can go and play a tune. Sure enough some keys are deadened because of something impeding them. It’s the blueprints for Midland Circle hidden inside the piano. I was thinking Matt had drawn this conclusion when he decided to walk over and awkwardly play piano in this stranger’s house. But maybe not. It looks like John was planning to use all those explosives found in his apartment back in episode one to blow up Midland Circle. What does the Hand have under that building that would freak him out this much? We don’t know yet.

The remaining four fingers of the Hand have received Stick’s gift in the mail, Sowande’s head. I wonder how Stick got it delivered to them. Did he call UPS to pick it up? They’re all obviously a bit shaken up by this development since they were, up until recently, immortal. There are more hints of mutiny from Murakami. He’s quite fed up with Alexandra and the Black Sky. Bakuto is less vocal but seems to agree with him. Madame Gao, however, plays peacekeeper and points out that they are all still on the same side. We don’t know what it is they’re trying to get from New York that would help them get back to K’un-Lun. But at this point I’m very curious.

Later, Alexandra is taking her pills in her room as Gao walks in without knocking. She says that she, Murakami, and Bakuto have agreed to follow Alexandra’s lead, but only if they can go and capture the Iron Fist without the Black Sky. Alexandra leaves the offer on the table. Elektra takes the clue from the funeral card and visits her own grave at the cemetery. Alexandra turns up and continues to give Elektra very few details about her life before death. But she does spill the beans on her own fragile mortality. She says they need the substance/ resurrection juice or they both will die. Elektra agrees to help Alexandra.

Back in the theater, Danny wakes up and tries to get Luke to untie him. But Luke isn’t having it. They do share battle stories though. Danny talks about fighting a dragon. Luke talks about getting shot by Jessica Jones. Across the room, Stick is meditating with some incense. Luke goes over to talk to him. Like with most conversations involving Stick, he’s rude and insulting. He shares how going to prison never leaves you mentally. Stick explains that his time in prison led to his recruitment by the Chaste. He describes them as the closest he ever had to family alongside Matt and Elektra.

Stick puts on some more incense, but it’s actually a trick! Luke gets all woozy. Stick has a different idea to keep Iron Fist out of the Hand’s reach. He’s just going to kill him. Simple enough. From around the block, Matt senses something is going wrong. He and Jessica rush back to the theater. Just as Stick is about the kill Danny, Elektra turns up. She and Stick battle it out. Danny passes out as the incense smoke reaches him. Stick has the chance to end the fight and kill Elektra, but he hesitates. For all his talk about the Black Sky no longer being Elektra, it seems he still hasn’t completely accepted that.

Matt gets there just in time to see Elektra plunge her sword into Stick’s chest. Then one by one she knocks out the Defenders. First Matt then Jessica. There’s a pretty cool moment where she sword fights Luke, who doesn’t have any swords. He uses his arms to block the sword strikes. But she still takes him out. Elektra grabs Danny and leaves through the window.

Alexandra is awkwardly eating alone in an empty restaurant again. Murakami shows up with a gift, but he’s actually planning on killing Alexandra. In quite unfortunate timing (or fortunate depending on your side), Elektra shows up right at that moment with Danny. They join up with Gao and Bakuto in order to finally put their mysterious plan in motion. Alexandra hints to Danny that K’un-Lun may not actually be destroyed like he thinks. They take him away.

The fingers of the Hand fall into their favorite activity, bickering at each other. Alexandra finally loses her cool a bit and explains all of her accomplishments. Just then, Elektra plunges her sais into Alexandra’s back. These weapons were Elektra’s first choice in life. Her using them again shows that she remembers. As Alexandra falls to the ground, Elektra addresses the others. “My name is Elektra Natchios. You work for me now.” Wiping the blood from her face she adds, “Any questions?” Well yeah, we have a few. But there are still two episodes left. So we won’t ask them quite yet. So the Hand has one of the Defenders. Elektra is now running the Hand. What are all the supporting characters doing at the police station? Hopefully there are some board games available.