Samsung’s Unpacked event was a blast, but it did lack a few key points that any major launch event should never miss. 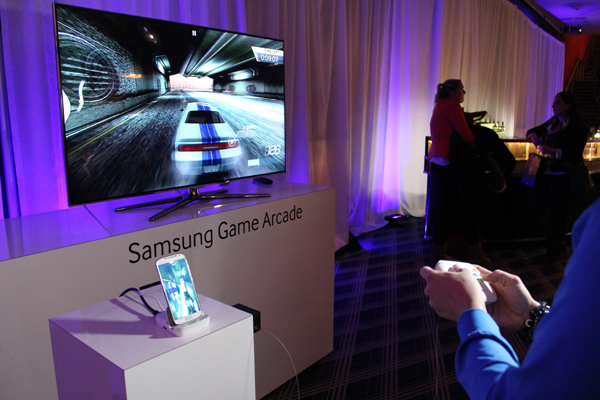 First of all, the company did not mention what version of Android OS the Galaxy S4 would be running (it is Android 4.2.2 Jelly Bean), and there were no words on the device’s Octo-core processor – that’s because it will be Octo-core only in certain markets, and quad-core in others. The event also didn’t include a gaming demo, which honestly is a must for any powerful device launch, in order to show both the processing and graphics quality; as well as the quality of the display. Although, it doesn’t mean that the event ignored the needs of gamers – it didn’t.

As you can see in the image above, the Galaxy S4 fits perfectly on the gamepad, but it’s not just for the Galaxy S4. As it works on bluetooth, so most of the recent Galaxy devices should also be compatible with the unit, including the Galaxy Note II and Note 8.0.

The gamepad itself looks quite decent, and a bit similar to the Xbox 360’s controller with the same color combination for buttons. It also has similar joystick alignment, and is powered by 2 AAA batteries. In the demo, it seems to come with a custom UI designed specifically for games, but we’re not sure if that’s something that’s included with the gamepad, or if it’s a feature in the latest updated version of the TouchWiz UI.

At this point, there are not many games on Android compatible with physical controllers, but that’s changing with the addition of quite a few physical controllers like Moga, Green Throttle Games, etc. Physical controllers are great for gaming on a touchscreen device, as it lets you feel the controls without having to look at your fingers, and your thumbs don’t take up a part of the screen everytime you have to perform an action.

This new gamepad is set to launch in May just after the Galaxy S4 comes out, and it will debut with 8 compatible games. The controller will also be compatible with nearly 80 titles at the time of its release. It connects to the device via Bluetooth, so it enables the player to play games on a TV. It also sports a dock, which will allow players to have their gaming fun on the go as well.

There are no words on the pricing of the device and we have no name for the gamepad either; but it was being advertised as the “Game Arcade” at the Unpacked event – not sure if that will be the final title of the gamepad.

Looks like Samsung is getting ready to take the mobile gaming market by its neck, and give other devices like OUYA, NVidia project Shield, etc., a run for their money.

What are your thoughts on the Samsung gamepad? Do you think it’s a great move by the company? Let us know.