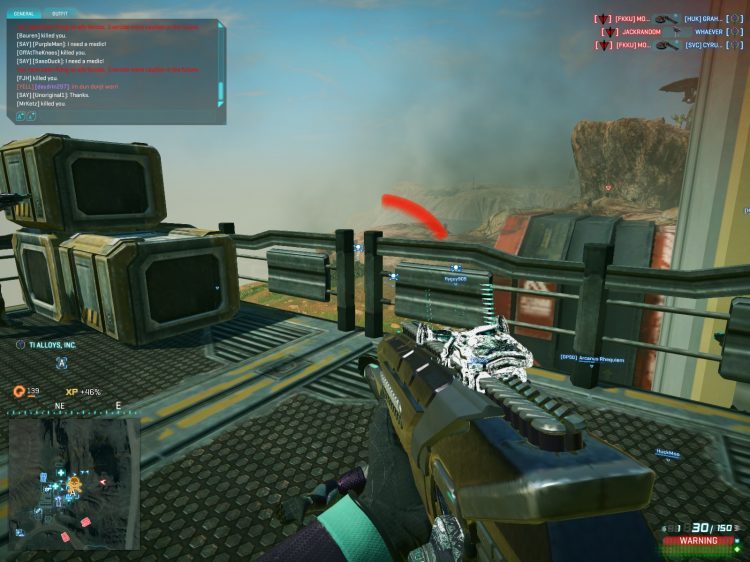 Anyone Geek playing games in the nineties will remember Doom. They probably also remember games like Quake and Counter-Strike(very late nineties). FPS games have given us all sorts of new avenues to explore our love of gaming. While the graphics have improved and gameplay advanced, our gaming now owes a lot to those early games. Now, having continued to grow, we see games like Call of Duty or Battlefield still pushing limits to try and make the ultimate FPS game. However, a game that drifted into the shadows in the last decade has decided to make a come back, once again calling thousands to fight in the same place. Planetside 2 has done well as an MMOFPS and as a sequel by giving players exactly what they are looking for.

Almost ten years ago the original Planetside game launched as one of the first(if not the first) MMFPS games. While MMOs were nothing new at that point, the idea of thousands of people shooting each other together in a giant combination of capture and deathmatch was revolutionary. Eventually the clunky design and sometimes buggy client led to Planetside’s downfall, but SOE didn’t forget it. As a matter of warning to any previous Planetside players, Planetside 2 has changed many of the systems you grew used to in the first game. Overall, the objective seems to have been updating these systems to more current game design since very few things were flat out removed or replaced. A wonderful example of this is the certification system, which was changed from 1 certification point per level to 1 per 250 experience points. Certifications now cover a wider variety of things and cost higher amounts to balance out with the change to their gain rate.

Oh my, what big guns you have!

No matter how much experience you’ve had with the first game, Planetside 2 is a whole new game of it’s own. Each time your character spawns you will need to choose a location to spawn to(shown on the map by green dots), as well as a class and loadout. SOE decided to make loadouts easier by dividing different weapons and suits(which used to be equipment) into five character classes(plus the MAX, which isn’t really a class) which can be swapped on respawn or at special terminals. Each class also has up to three(third unlocked at level 15) loadouts, which is a saved configuration of guns, attachments, and equipment.

Even with the extensive amount of features this game brings to the table, SOE still knows gamers always want more.  They understand it so well that they’ve made what they call a roadmap.  This roadmap shows what they have planned for the game, when it will be available, and even allows players to vote on which features they believe will be the most important.  Many players from the first Planetside will notice that several of these features are those once present in the first game, proving SOE is dedicated to making this a true sequel.

FPS gaming has come a long way, and Planetside 2 only serves to show that even more.  While many studios would charge both legs for something like this(gamers need their arms, duh!), SOE has learned the value of a F2P model and is utilizing it well.  Though it’s currently not able to keep my attention as my main gaming habit(there’s only so much content in an FPS..), I definitely pop open PS2 any time I start to itch for a shooter.  You should try as well.