Oscars Predictions – Who Will Win on Hollywood’s Biggest Night 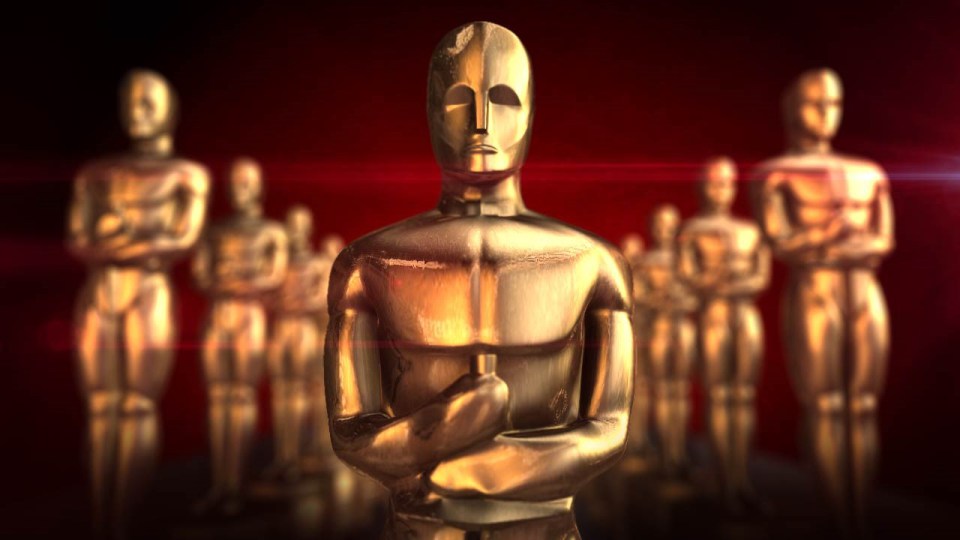 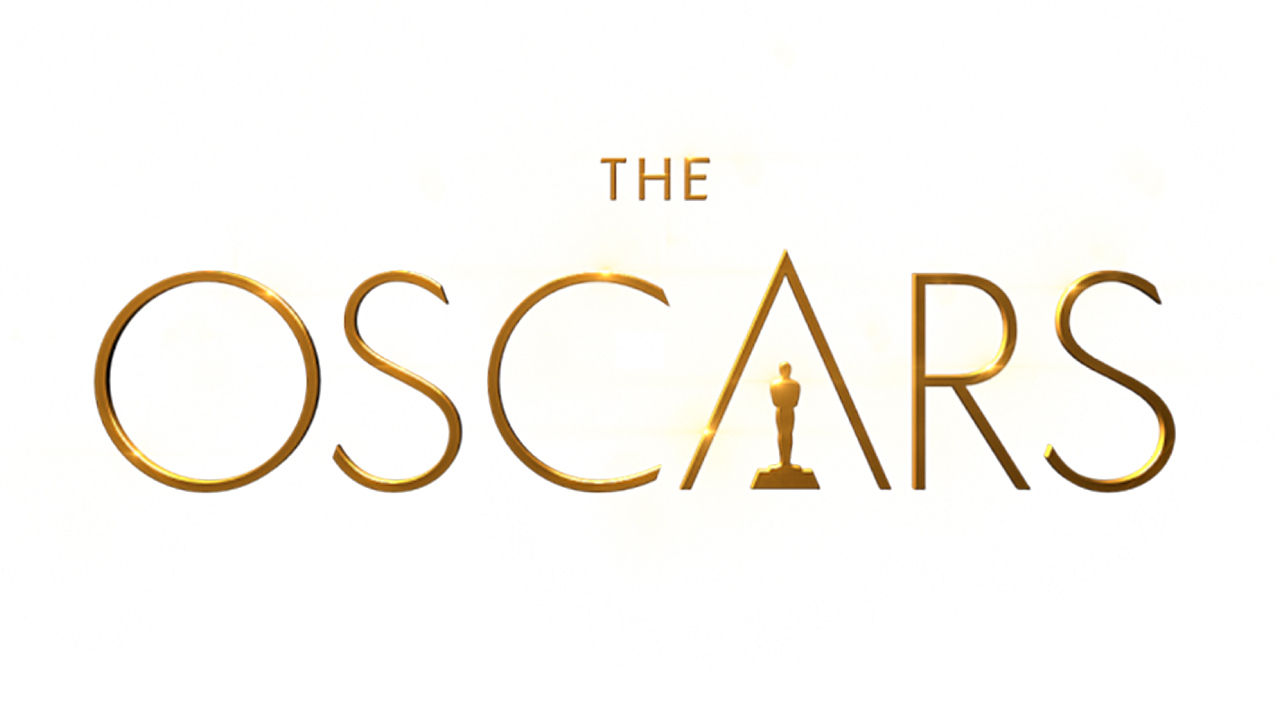 Actually, don’t place any bets. We, here at Geek Insider, will not be running any sort of Oscars pool this year. ‘Cause we’re pretty sure that’s illegal. Not that the biggest – and whitest – night in Hollywood won’t be worth betting on. With some of tinsel-town’s finest citizens and many of the year’s biggest films up for Oscar gold, the 88th Academy Awards ceremony should be quite an event. Of course, in the long run it won’t really mean anything. The best films of the year almost never get invited to the show. Even the big winners from recent years are already fading into the twilight. Still, it’s a hell of a lot of fun to watch it all happen. With that in mind, here are my predictions for all the winners and losers to come on February 28th. Drumroll please …

And the Nominees Are:

Who Will Win:  Sylvester Stallone – Creed is the defining moment in the actor’s storied career. It’s also the finest performance he’s ever given.

Who Should Win: Sylvester Stallone – It’s also the finest performance of any actor on this list – though Mark Rylance is a very close second for his work in Bridge of Spies.

Dark Horse: Tom Hardy – The Revenant has been nearly unstoppable this awards season. Hardy may sneak in and spoil the moment. And Best Supporting Actor is a notoriously dodgy category.

Who Will Win: Kate Winslet – She’s won damn near every other award leading up to the Oscars. Don’t expect anything to change when it comes time to dole out Oscar.

Who Should Win: Rooney Mara – Her soulful, introspective performance in Carol was the backbone of Todd Haynes’ moody masterpiece.

Dark Horse: Jennifer Jason Leigh – Hollywood loves a comeback. There was none more satisfying this year than Jason Leigh’s piss & vinegar prisoner from the Tarantino-verse.

Who Will Win: Leonardo DiCaprio – Let’s just give poor Leo an Oscar already so he can stop whining and go back to just taking himself too seriously. Not that he isn’t a wonderful actor, but his The Revenant performance is not his best work.

Who Should Win: Michael Fassbender – A fiercely intelligent performance that wholly embodies a true historical icon. One that the world already knew a lot about – and nothing at all as it happens.

Dark Horse: Matt Damon – Hollywood loves this guy as much as the general public does. His charming one man show in The Martian may be enough to finally land him an overdue award for his acting.

Who Will Win: Brie Larson – Here’s another nominee that has won every award leading up to the ceremony. No reason to expect anything but another win from The Academy.

Who Should Win: Brie Larson – Seriously, did you see Room? Tender and manic and heartbreaking, Larson always finds a shred of hope that life might eventually be ok for her tortured mother – even if her pint-sized co-star Jacob Tremblay stole every moment – and every heart in the process – of that film.

Dark Horse: Charlotte Rampling – When an actress has been working to such high standards for such a long time, you can never count them out. There’s probably not a nominee on this list that wouldn’t site Rampling as a direct influence. It’s too bad not many people saw her devastating performance in 45 Years. The Academy might just make up for that.

Who Will Win: Alejandro G. Iñárritu. Took home the Golden Globe and The Director’s Guild awards. Oscar almost never deviates from this pattern – making it two in a row for Iñárritu.

Who Should Win: George Miller. No director on this list matched the scope, energy or absolute lunacy that was Mad Max: Fury Road. And nobody saw it coming prior to the film’s release.

Dark Horse: Adam Mckay – Yes, the director of Anchorman (2004) and Step Brothers (2008) is nominated for an Oscar this year. Nobody is exactly sure how it happened. That should scare the hell out of his fellow nominees. 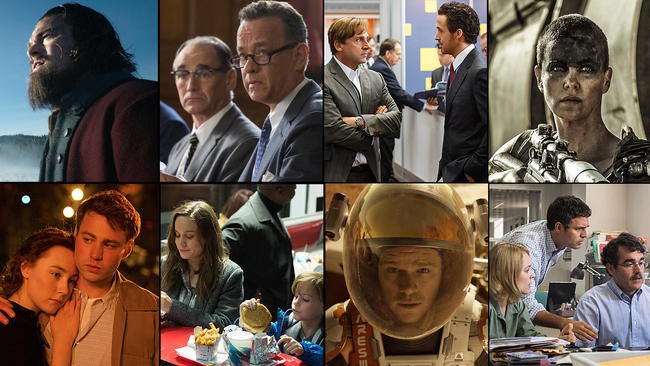 Who Will Win: The Revenant – Iñárritu’s icy tale of survival against all odds has been tough to beat this awards season. It’s not a great film. It’s barely a good one. But it’s gotten a big Oscar push and looks to have the night’s top honor already in the bag.

Who Should Win: Mad Max: Fury Road – Did I mention that no director matched the scope, energy or absolute lunacy of Mad Max? No production on this list did either. Still, I’ve got a feeling Miller & Co. are going home empty-handed come Oscar night.

Dark Horse: The Martian – Audiences ate up Ridley Scott’s brainy, feel-good sci-fi film. The Academy may be lining up for seconds. The Revenant seems like a sure bet here, but  so did Saving Private Ryan back in 1999 – before Shakespeare in Love inexplicably took home the award. That’s not even mentioning the Raging Bull/Ordinary People debacle from 1981. Weird stuff happens, and this year could see another jaw-dropper. 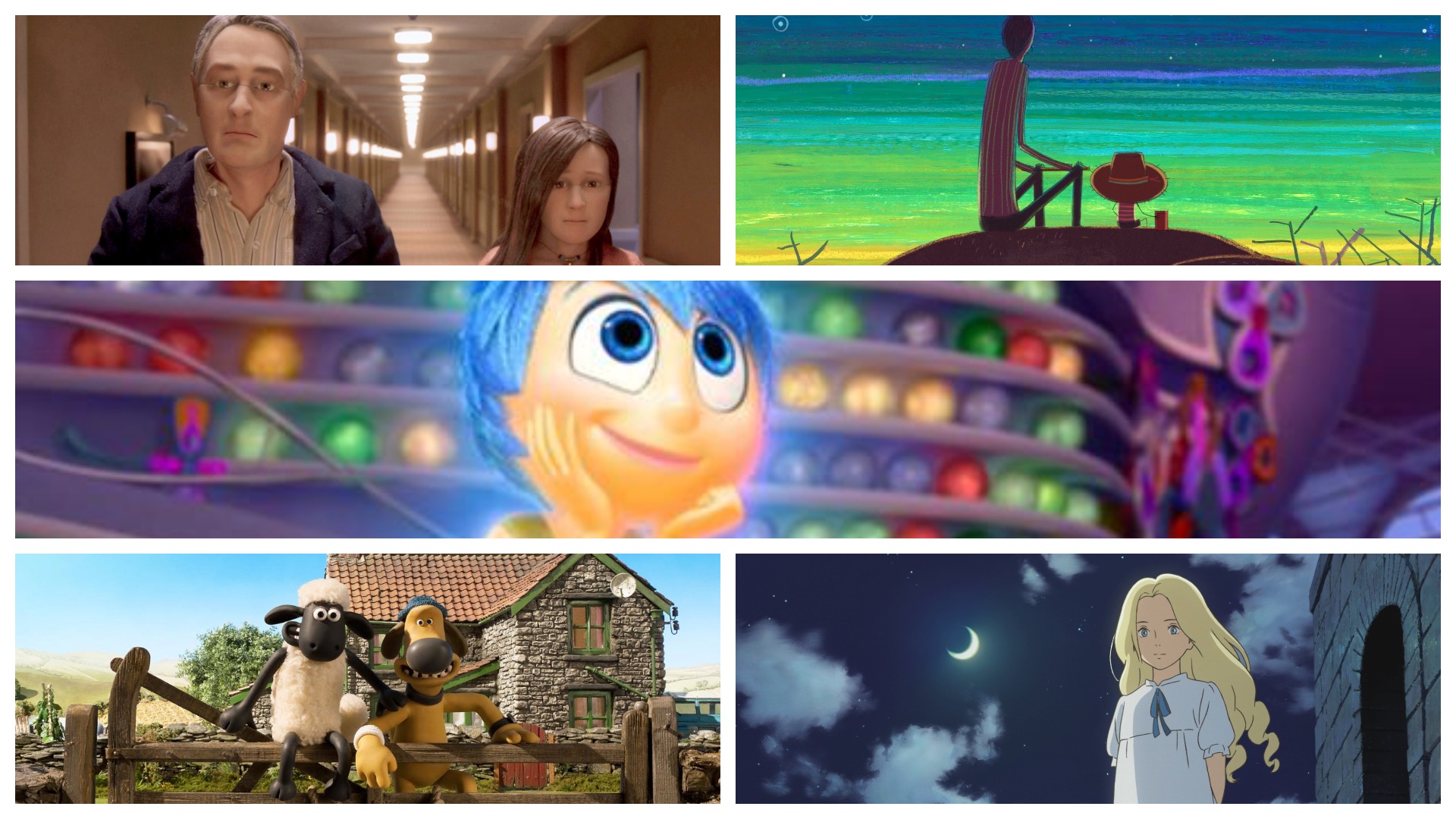 Who Will Win: It’d be nice to see Charlie Kaufman collect an Oscar for his daring, adult themed Anomalisa. And I’d love to see Shaun the Sheep Movie get a little Oscar love, but it’s another win for Pixar this year. Which is ok, because Inside Out is one spectacular film.

Right then, we’ve got the big dogs out of the way. But we’ve still got some fun categories left to check out, so let’s soldier on. 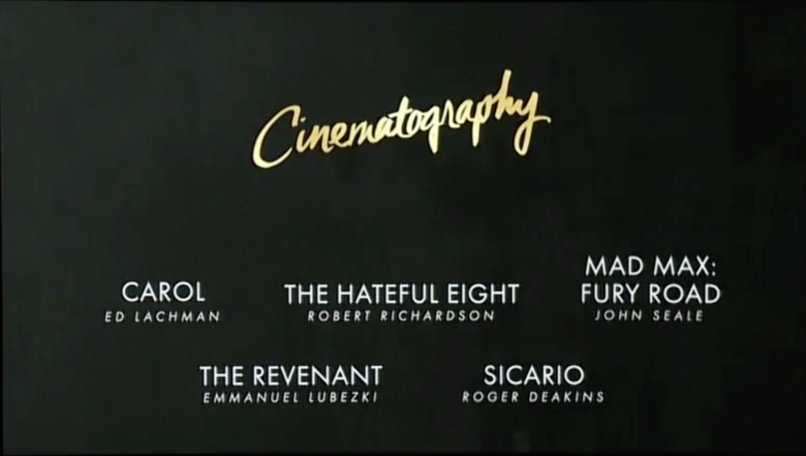 Who Will Win: There’s not a DP or film on this list that isn’t worthy. With The Revenant looking to clean up in the major categories, it could be another win for Lubezki. That would make it three in a row for ‘Chivo’ who previously won for Gravity (2014) and Birdman (2015). There may not be a more gifted DP working right now, but I have a hard time believing that The Academy will go with Lubezki for a third straight year. That leaves the door open for John Seale to get some love for his astonishing work on Mad Max. 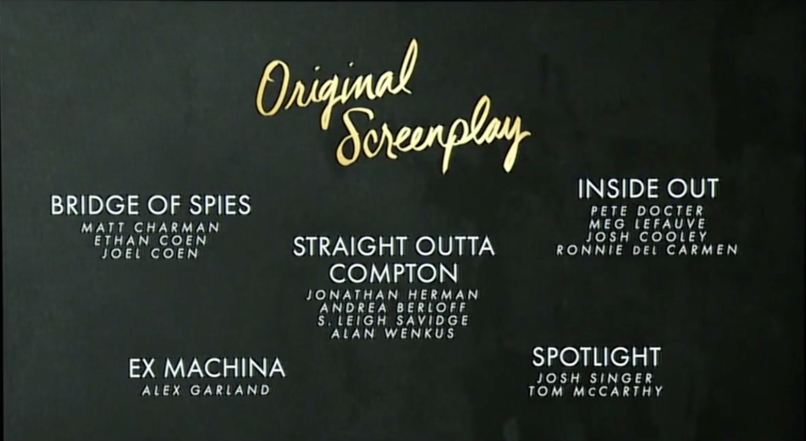 Who Will Win: This is where The Academy finally rewards the real best picture of 2015 – Alex Garland’s Ex Machina. And if not, I will stomp and cry like a baby. Which may actually happen, because Pixar has an entry here too. This category could also be a fascinating look at whether or not the #oscarssowhite campaign actually got The Academy’s attention. That could swing things in the favor of Straight Outta Compton, which was a really solid film. Still, Ex Machina or bust here. 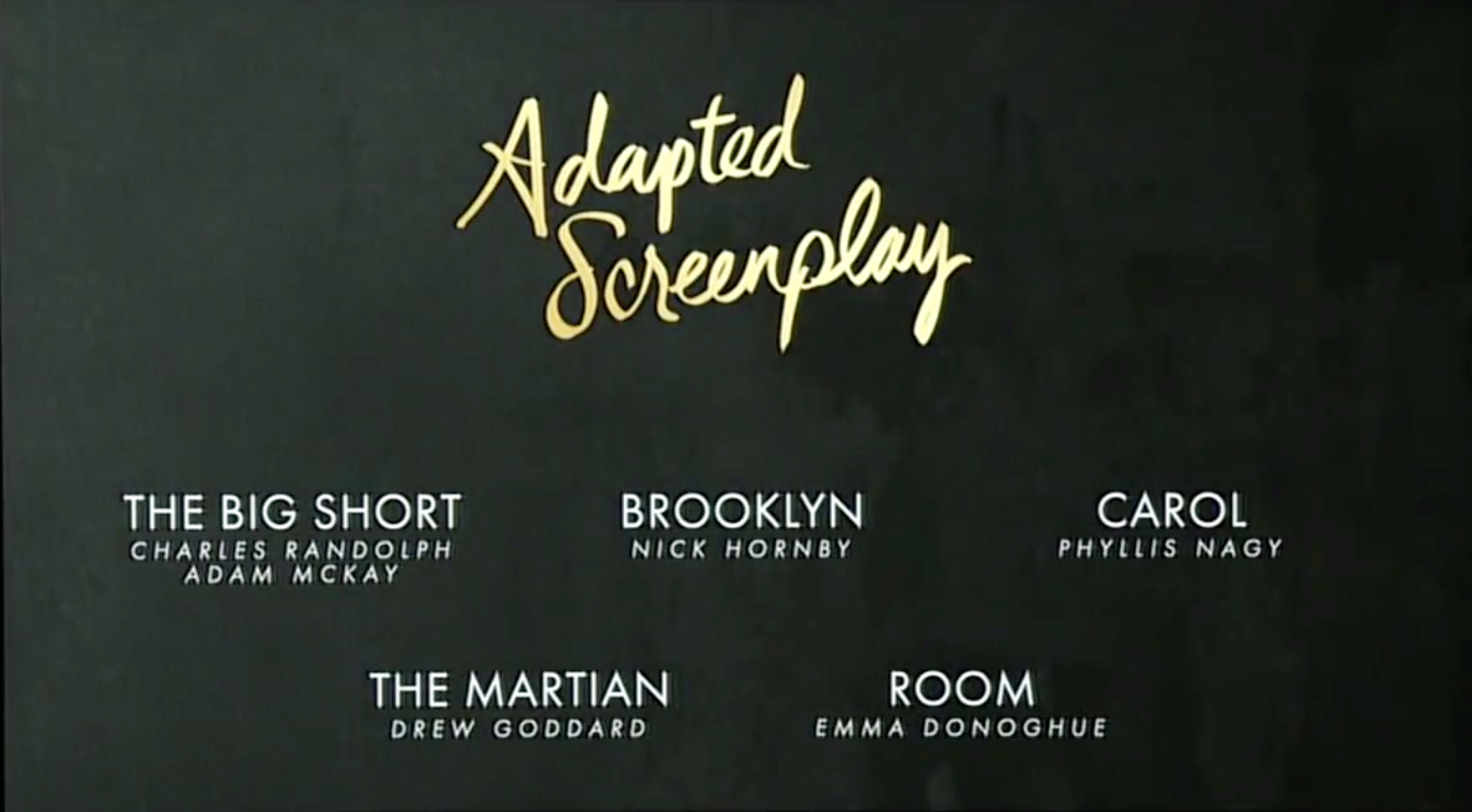 Who Will Win: Honestly, this is one of the worst Adapted Screenplay categories in years. There’s only two films on this list worthy of the honor – Room and Carol. Room was the only film I saw this year that made me cry, so I’m going with it. Though I certainly would not scoff at Phyllis Nagy walking away with a statue for Carol. Just so long as Drew Goddard – who is a writer that I generally like, but whose screenplay for The Martian was completely devoid of suspense – doesn’t take home the prize. 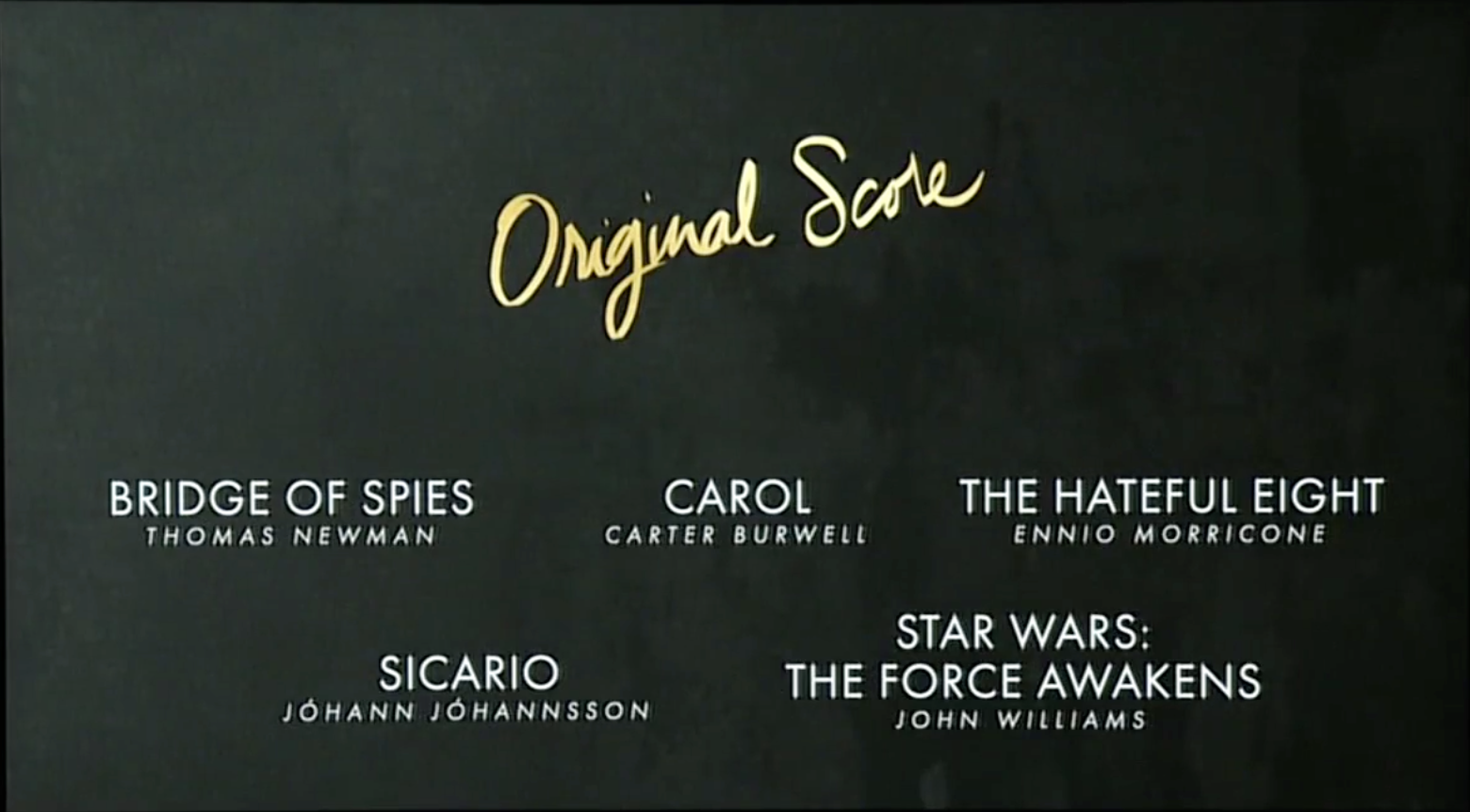 Who Will Win: Traditionally one of my favorite categories. And two of these scores made my Best Of 2015 list. My number one score didn’t get nominated this year. But Carter Burwell’s heartbreaking score for Carol landed at number two on that list, so it’s now my number one at the Oscars. Still, my heart tells me that Ennio Morricone will take the honors this night. It’s hard to believe the legendary composer has never won the big award. No time like the present. And The Academy loves to give lifetime awards to overlooked legends. Just so happens that his work on The Hateful Eight is extraordinary. Now, let’s just hope that Tarantino doesn’t show up to collect the award and take all the credit for it like he did at the Golden Globes. Love your films, QT. But sometimes you really just need to stop talking. 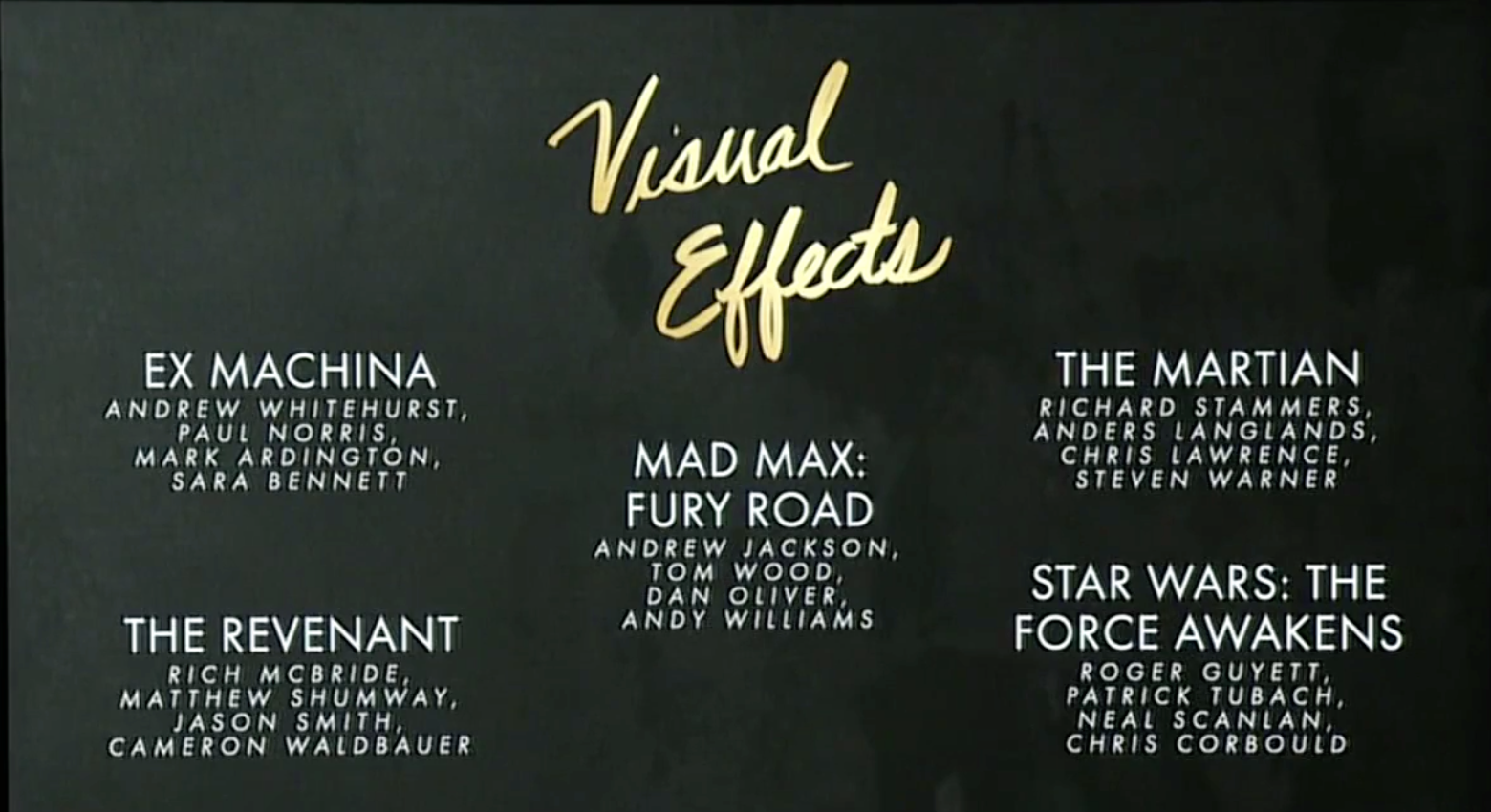 Who Will Win: This category is wide open. Seems like Mad Max is a solid bet. The sheer amount of work that went into the film’s mostly practical effects puts all the other nominees to shame. But so many people were blown away by the bear attack in The Revenant, it’s impossible to rule it out. Personally, I’d like to see my favorite film of 2015, Ex Machina take this award. Where The Revenant reveled in CGI and Mad Max went mostly practical, Ex Machina seamlessly blended both approaches to create the sentient being at that film’s core. And damn if that effect isn’t massively effective. 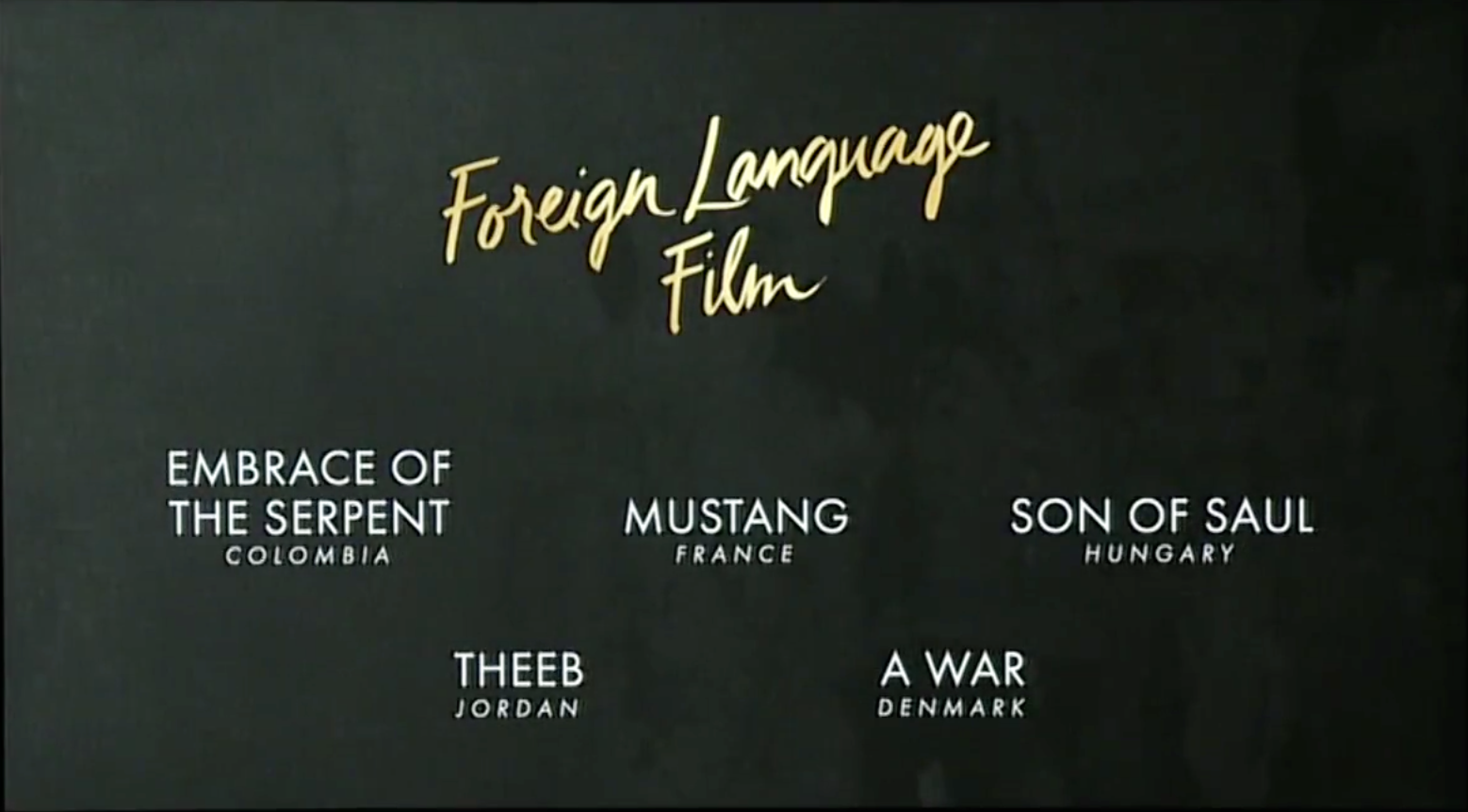 Who Will Win: With an eclectic list of films, this looks to be the most competitive category at this year’s ceremony. Personally, I loved Embrace of the Serpent and would like to see it take home the prize. But history will tell you this – if there is a holocaust movie nominated, it will likely win. So put your smart money of Son of Saul to walk away with this one.

There you have ’em. My official, can’t lose, 100% guaranteed Academy Award picks for 2016. I know, I know – all the categories are not listed here. Sorry, but I didn’t want this article to run quite as long as the ceremony inevitably will. Besides, these are the awards that really matter. Unless you’re a costume designer – in which case you should bow down to the Mad Max team now and get it over with. Anyway, tell me what you think? Am I right? Am I completely insane? Will Chris Rock spend the entire show telling racially sensitive jokes? I’m more than happy to talk all about it come February 29th. Until then, let’s go play that hilarious ‘Leo’s Red Carpet Rampage‘ game and see if we can’t get that poor guy an Oscar already.

Celebrities and the Surprising Things They Invest In