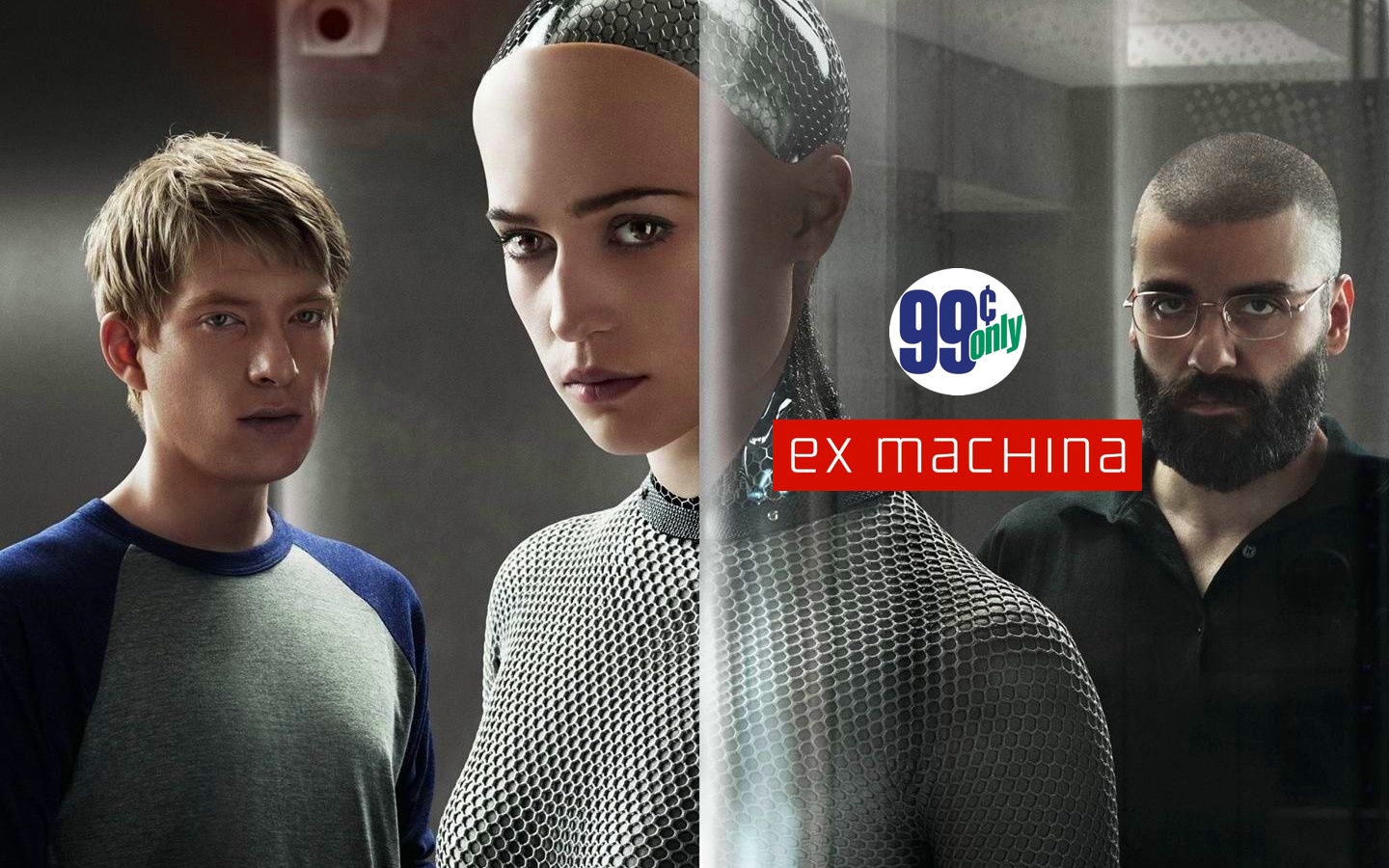 This week, the best film of 2015 is front and center with Alex Garland’s Sci-Fi masterpiece, Ex Machina.

Caleb (Domhnall Gleeson) is a mid-level coder at the world’s largest tech company. When he wins a chance to spend a week with the company’s reclusive founder, Nathan (Oscar Isaac), it looks like the opportunity of a lifetime. Whisked away to Nathan’s remote research facility, Caleb promptly finds himself the key figure in the most important experiment in human history. Ava (Alicia Vikander), Nathan’s beautiful humanoid creation, is the subject of said experiment that seeks to prove she’s the world’s first fully realized Artificial Intelligence. Embroiled in the mother of all Turing Tests, Caleb, Nathan, and Ava fall into a spellbinding game of cat and mouse and mouse as Ex Machina elegantly examines questions of hubris, humanity, and the troubling emotional isolation of the modern world.

Is It Strange, to Create Something That Hates You?

If Garland’s name sounds familiar, it’s because he’s written some of the best genre films of the past decade-plus in 28 Days Later (2002), Sunshine (2007) and Dredd (2012). Finally stepping into the director’s chair, Garland guides Ex Machina with an uncommonly steady hand. Keeping his film confined to the hushed, antiseptic confines of Nathan’s compound, the director builds a startling layer of tension out of the quietude. The sterile habitation, buried deep within a glacial mountainous region, feels more like a prison or an alien outpost than a human dwelling. That highly questionable actions are taking place within its walls is a forgone conclusion. Once the key players get behind closed doors, all bets are off and stakes escalate through a series of tests administered in Caleb’s interactions with Ava. As conversations spur intentions, the line between man and machine rapidly erodes. Intentions turn to actions and actions lead Ex Machina toward a harrowing finale as vicious and unexpected as it is poetic.

As motives become clearer, Garland finds ways to confuse every situation and confound expectations. Yet, in spite of its many twists and turns, Ex Machina never feels deceitful. I’ve rarely been more surprised by a film, or more moved. Every moment of Garland’s tale feels like some grand discovery. Sometimes that discovery is scientific, sometimes it’s emotional. Whether experienced by man or by machine, it’s always deeply human.

It’s Garland’s dissection of what it means to be human that makes Ex Machina such an awe-inspiring experience. He’s more concerned with asking questions than giving answers, but few filmmakers have dared to examine such hefty subject matter so honestly. Even fewer have have succeeded. But then, most of them didn’t have the talents of Isaac, Gleeson, and Vikander to lean on. Much of Ex Machina‘s success can be attributed to crackerjack casting by Garland and Casting Director Francine Maisler. In the film’s three leads, Garland is able to examine humanity from distinctly different angles.

As Creator, Isaac brings a frightening blend of ego and self-loathing to lonely mad-scientist Nathan. Riding the highs and lows that often accompany genius, Isaac imbues such fierce energy and intellect into every word he utters and every action he takes that you can hardly take your eyes off of him even in his lowest moments. As Student, Gleeson paints Caleb as the picture of intelligent naiveté. With Caleb playing pawn in a game he never fully understands, Gleeson manages to find just the right mix of empathy, cockiness, desperation, and awe. Though Caleb doesn’t understand the game, we always believe that he knows he’s in it. Gleeson’s subtle, heartfelt performance gives the film the fresh set of eyes it needs and the tragic edge it requires. But the whole enterprise rests squarely on the shoulders of Alicia Vikander as Ava, the Creation. Vikander does not disappoint. Behind strikingly emotive eyes, Vikander’s Ava is fierce, tender, fearless, and alluring. She’s the best of humanity built into the indifference of a machine. That we believe Ava feels is why want to trust her. It’s also why we’re never certain we should. 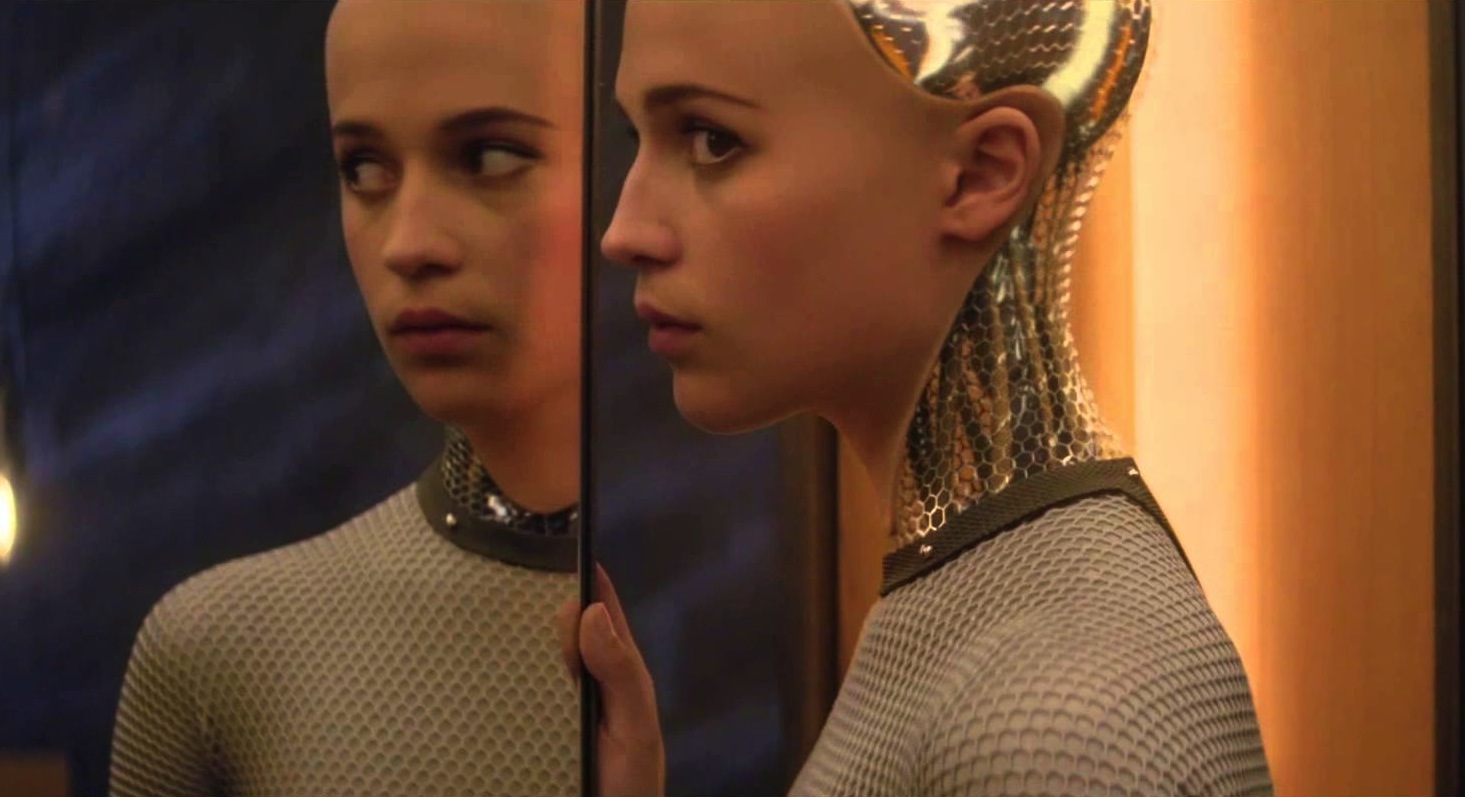 Ex Machina‘s greatest success is that you do feel so much of the film. As the glitchy, ethereal tones of Ben Salisbury’s and Geoff Barrow’s luscious score meld with Director of Photography Rob Hardy’s glowing, meticulously framed images, Garland and Editor Mark Day pace the film like a gas leak waiting for a spark. Seamlessly blending the elements together, Garland makes Ex Machina more than just a film. It becomes an experience that burrows into those deep down places you rarely ever acknowledge and lingers long after the credits roll.

You better believe it. Ex Machina is that rare moment when great Sci-Fi becomes great art. For that reason – and many more – it was my favorite film of 2015. You’ve heard me gush enough so I’ll just say that you’re an absolute fool if you don’t drop a buck on Ex Machina this week. Whether you’re seeing it for the first time – or in my case the fourth – Alex Garland’s film is certain to make you think, make you laugh, and make you feel in ways that contemporary cinema rarely does. Drop the buck, turn your brain on, and thank me later.