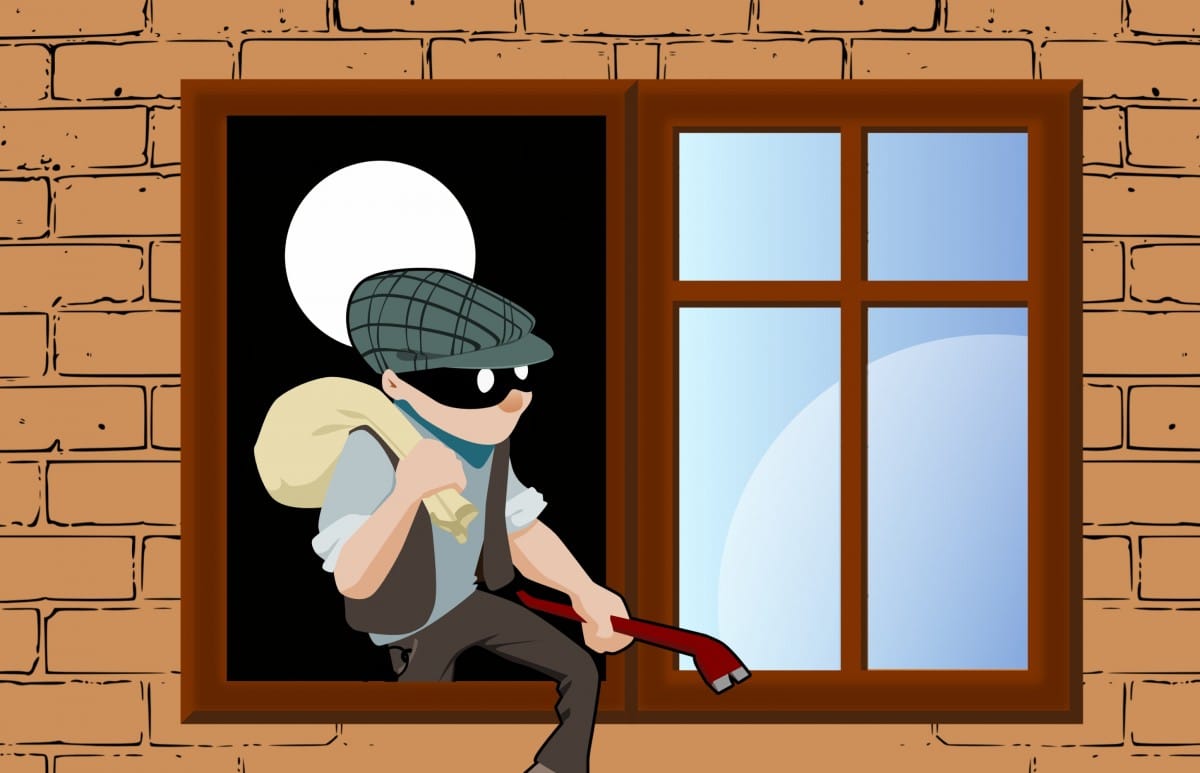 I’ve covered the Mandela Effect a time or three, and while it once made me question my sanity, these days I generally just take the changes in stride. Trust me, not much can shock you once you’ve witnessed an actual flip/flop — where an item changes from what you’ve always known but according to that day’s history it has “always been” the new way, but then said item inexplicably changes BACK to the original way you knew and its history says it never changed.

Yeah, yeah, I know. It’s crazy sounding. If I didn’t have a wife and daughter that witnessed the same incidents, I would have probably voluntarily admitted myself into a psychiatric hospital.

But, that’s kind of the theme with the Mandela Effect isn’t it? Nothing makes sense and it sometimes seems designed to drive observers absolutely bonkers.

And then sometimes, it’s seemingly designed to target specific types of people.

Automobile changes like the VW logo and the “Objects in mirrors may be closer than they appear” disappearance should indoctrinate those in the industry. Not to mention the millions of us that spent numerous hours in the passenger seat looking at that damned “may be.”

Kit-Kat/Kit Kat, Froot/Fruit Loops, Pikachu’s tail, Shaggy’s Adam’s apple, et al seem double-sided to me, perhaps set to catch the attention of children as well as those of us that grew up with them.

I could go on and on and while this next one did indeed have brands for both boys and girls, at least at some point in time, I can’t help but feel that this ME seems targeted at guys. Specifically ones that grew up in the 70’s and 80’s, but perhaps even into the early 90’s.

What am I talking about this time?

As I said in the title, Mandela stole my fricken underwear.

Fruit of the Loom

Don’t worry, I’m not about to claim that it changed to Froot. Like oh so many young men, I grew up wearing those good old Fruit of the Loom tightey-whiteys.

Admittedly, I probably didn’t change them every single day of my young life, but I certainly changed them enough to at least have somewhat of an intimate knowledge of them. I was also subject to numerous Christmas mornings having that one package of new undies that blared the name and logo to my disappointed face.

But now, that logo is rather… different.

No documented rebranding from the company. No logo change.

It’s just “always been” this way.

Now, this isn’t a new Effect for me. I’ve known about it for quite awhile but I’ve held back on writing about it because I intended to do a deep dive on it like I did Ed McMahon and Publisher’s Clearing House.

It’s that disturbing to me.

Well, I haven’t gone quite that in-depth at this point, but I certainly think I have some interesting things to share.

I don’t care what current history shows, the Fruit of the Loom underwear had a little group of food in front of a cornucopia. You know, the horn of plenty? How am I so sure about this one?

Because I wore them every single day for well over a decade.

And because that’s how I learned what a damn cornucopia was.

I’m not alone. There are countless people, both men and women, all over Reddit and the rest of interwebs that attest to the exact same education.

The same memories of seeing that logo on a regular basis throughout adolescence, many with their names stenciled or written in permanent marker next to the logo in question. Back then, moms were certain that there were underwear thieves around every corner.

Yet, we’re all wrong now.

There is not now, nor has there ever been, a cornucopia on the logo of Fruit of the Loom.

Which do YOU remember? 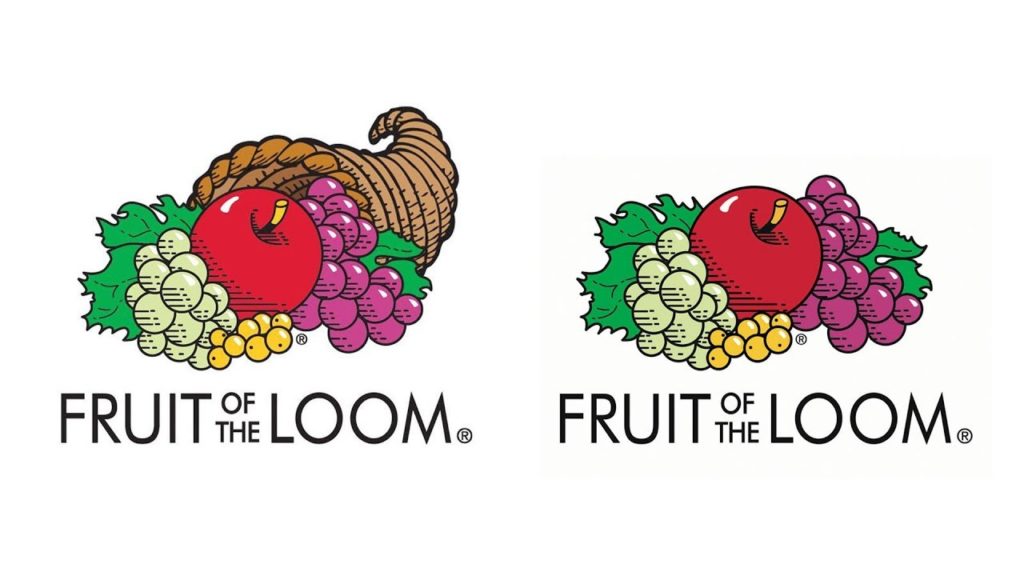 A Deeper Look at my Underwear

I got married at an early age and my wife promptly enacted a change of wardrobe for me; from head to toe. I abandoned the tightey-whiteys like a good husband and in the mid-to-late nineties I noticed the logo “change.”

Of course, just like so many of us, this was an encounter I simply brushed off as a corporate redesign and thought no further of it.

Until I fell down the ME rabbit hole.

When I found out that there had never been a cornucopia in the logo, I immediately called “Bullshit!” However, I was fairly initiated into the world of the Mandela Effect by this time, so it wasn’t nearly as shocking as watching Mandela’s funeral only to see him walk out of prison a couple of years later or witnessing the Froot Loops flip first hand.

But it was disturbing.

This was like a major piece of my childhood.

I had two anchor memories here — seeing the logo on a regular basis AND learning the definition of cornucopia because of the logo.

So, I filed it away for future examination.

When you check out the history of the official logo, there’s not a cornucopia in sight.

Just as I did on the Ed McMahon investigation, I searched Google Books rather deeply for mentions of this particular logo. However, I was somewhat surprised to find that there wasn’t any mention of the cornucopia in the listings I perused.

I did happen upon a good bit of advertisements in old Life magazines, some dating back to the 60’s, but of course the logos match the history according to today.

At this point, history states that in 1893, Fruit of the Loom established their official logo as an arrangement of an apple, green grapes, purple grapes, and gooseberries.

A look around the good old world wide web reveals something a little different. Of course a good portion of the search results lead to Mandela Effect related websites, but there are a few that caught my eye.

From Newspapers.com, check out this article from 1994. The Florida newspaper is discussing an actor coming to the area that played the purple grapes for 19 years in Fruit of the Loom television commercials. About 3/4’s through the article, the author states that the underwear maker’s “logo was initially a cornucopia swollen with an apple, green grapes, purple grapes, and their green leaves.”

An article from 2012 from Queerty seems to be confused as to the actual definition with the statement of, “The company’s logo—a cornucopia minus the basket.”

In a somewhat jumbled post attempting to explain what a cornucopia is, the author states, “Like fruit of the loom.” Though I’m not certain if that’s exactly what he was attempting to do as it may be pasting of previous questions on the subject.

A question on Answers.com in 2011 in 2011 for “What fruits are in the fruit of the loom logo” was answered by a user with,”The classic “Fruit of the Loom” cornucopia (horn of plenty) includes an apple, purple grapes, green grapes, currants and leaves.”

Even a cancelled trademark from 1988 listed the horn of plenty as a design search.

Of course, YouTube is full of Mandela Effect videos that discuss this particular change and I’m sure some of them have even more examples.

Someone Call the Hardy Boys

The Case of the Missing Underwear may have been right up their alley.

The underwear of my youth no longer existed. That’s what mainstream history is telling me.

If there has “never been” a cornucopia in the official Fruit of the Loom logo, why do SO many associate one with the company?

Mistaking it with traditional Thanksgiving settings and images?

With something we saw every single day?

I’m not buying it.

I have no doubt that a subscription to Newspapers.com would reveal even more articles and other “mistaken” mentions of a cornucopia, but the strongest evidence for me on this one is simple.

There are simply too damn many of us that remember the cornucopia.

I’ve heard it all. Believe me.

Tell that to my uncle, 2 brothers, and all the people posting about strong anchor memories on Reddit and other ME and alternate history websites.

As I’ve said many times before, the Mandela Effect is as real as you and I. The cause/definition is not known, no matter what Wiki and other sites try to tell you, and while one day it may all be revealed, right now all we can do is wait and watch.

Because my favorite quote from Albert Einstein may well be more true than we ever imagined — “Reality is merely an illusion. Albeit a very persistent one.”

How to Choose the Ideal Smartphone for Your Needs

Ok.. so explain to me why my panties up and walked away.. that damn cornucopia was there when I was young!

Loved it. And the pic you posted with the cornucopia, is pixel for pixel how I remember it. Like you, I just assumed they changed their logo when I stopped seeing the cornucopia. This one is right up there with the Bernstein Bears for me.. and Ed McMahon.. which Roseanne mentioned in one of her episodes in the 90’s btw

Great article! Refreshing to see one that doesn’t misattribute this phenomenon to bad memory. I’ve done some research on the missing cornucopia myself. These 2 videos present additional evidence and combat much of the “misremembering” nonsense that gets spewed from skeptical deniers.

Here’s some “cornucopia” residue in this 1973 trademark filed by the company!!!!

Absolutely always had a cornucopia. It was on the label, on the plastic packaging seen in big stacks in Walmart. After a hundred or so washes, all the dyes faded out of the label except two colors: brown and red. The only way you could still tell it was Fruit of the Loom is because on those faded labels the only thing left was a brown triangle (the horn) and a little red dot (what remained of the apple). All the other colors were gone, even the black text. Anyone remember that detail?

Hahaha.. good visuals. Yeah the horn missing is simply mind boggling to me… why do SO many remember learning what the heck a cornucopia was thanks to their undies? We all made it up? pssshhh