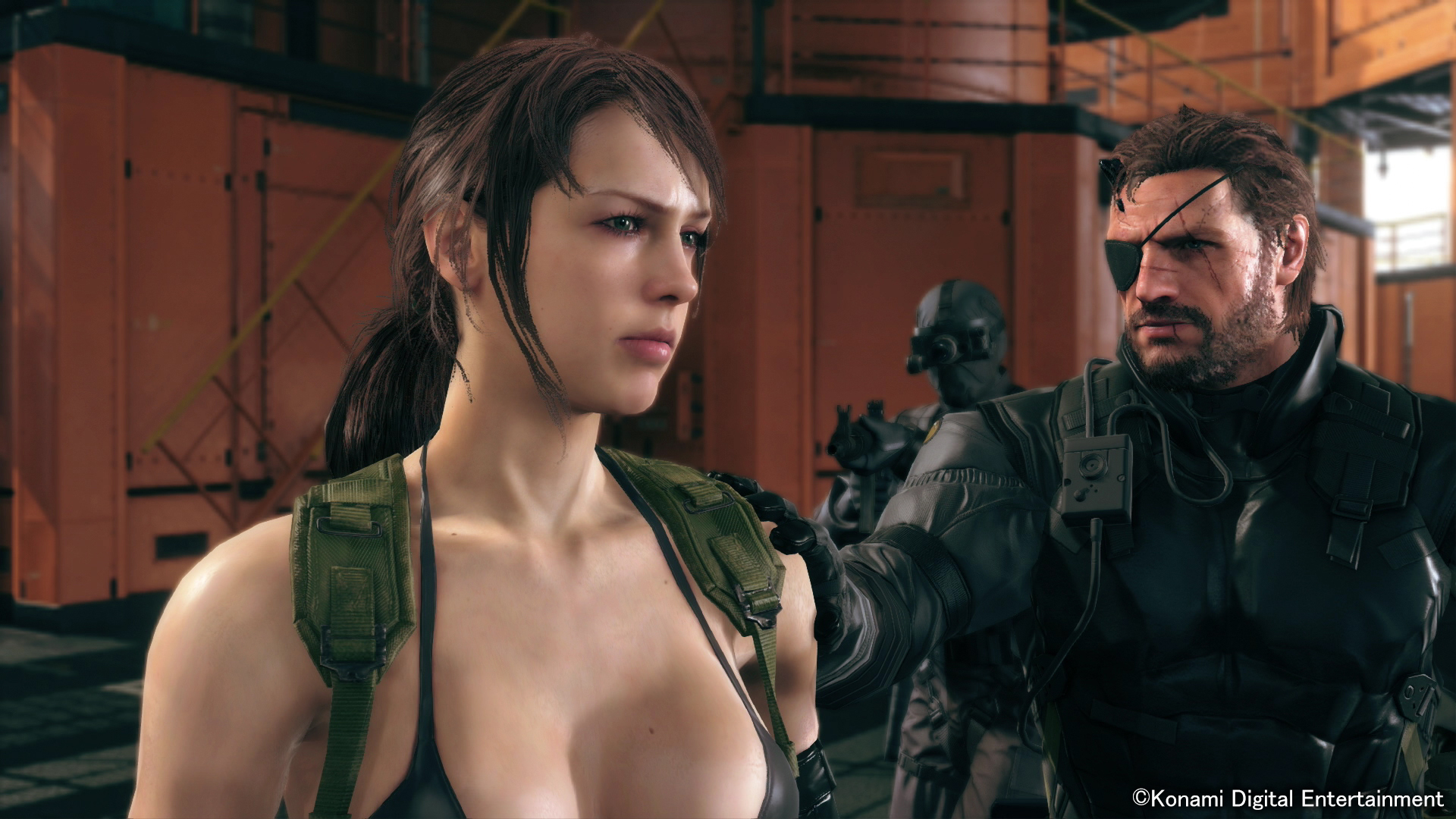 I have a confession to make to all the MGS die-hards out there – up till now I’ve never played a single title in the entire history of the franchise. I’m a neophyte to the weird world of Big Boss, bipedal nuke carrying mechas, terror and counter-terror plots, and abounding corniness and pretension stemming from the lost-in-translation type dialogue: “You’re a legend in the eyes of those who live on the battlefield.” Case in point. In short, when I downloaded it (I played on PC), I simply did not know what to expect. I certainly didn’t expect it to be the best game I’d ever played.

For starters, the game is visually stunning. But I bet you already knew that. Phantom Pain famously runs the Fox Engine, built by Kojima Productions, the game’s developer, specifically for this and its predecessor Ground Zeroes. It’s touted as “the best engine in the world.” And though it was a long and expensive production the end result is nothing less than breathtaking, affecting not only the graphics but the user interface and playability as well.

This is the engine that finally opened up the world of Metal Gear Solid, allowing the player to rove across dozens of miles of open territory, reveling in the splendor of an actualized, real time world. The sun sets and rises, affecting your eyesight and accuracy, as well as your enemies. Sandstorms cascade across the screen and allow you to pass by guard posts with ease. Rain conceals the sound of your footsteps. The world is active, dynamic, and responsive – Soviet era Afghanistan brought to life.

For those of you who don’t know: you play a man named Snake, otherwise known as “Boss,” an elite soldier who has organized an independent organization tasked with defeating its counterpart, Cipher, a rogue paramilitary wing with aspirations of world domination. Nothing out of the ordinary about that. The backdrop is that it takes place in 1984 during the Soviet invasion of Afghanistan. However, the remaining details of the story are so numerous and convoluted that it would be a disservice to attempt to break it down now. Speaking of story…

I had heard from friends that the previous MGS’s were story-heavy, laden with long cut scenes brimming with philosophical musings – and I was fine with that going into it. I’m a casual gamer who appreciates an RPG with a cohesive story and game play that has a sense of building towards something greater – dare I say, a theme? Titles like The Witcher series and The Last of Us come to mind, two of my all-time favorites in this regard. And Phantom Pain has those elements in spades. But it is far less story driven than its predecessors, giving the player more freedom to explore this vast environment and make their own story as they go. With roughly 40+ hours to get through the main narrative and side ops, this is a hefty game. And that’s nothing if not good. You get bang for your buck. You won’t want it to end 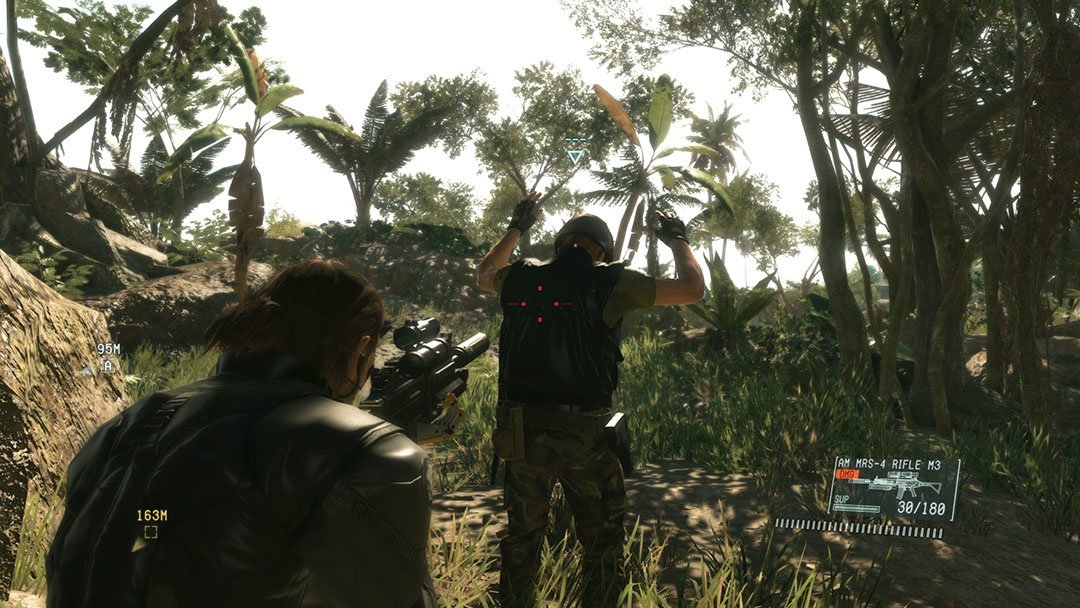 But you will probably want it to move along at points. At times I had the sense that I was slugging through content and repetitive side missions just to get to the cut scenes, the major story developments. There’s only so many times you can shoot someone in the face with a stun gun in slow motion before you begin to ask the bigger questions. Questions like, “When’s the next boss and when can I shoot it in the face with a rocket launcher?”

That aside, the gameplay itself is fluid and engaging. The controls (at least on the PC version) are well placed, simple and streamlined, allowing you to easily shift and react to a changing scenario without much fret. A drawback is that the game has one difficulty setting, meaning that Kojima sets the bar. I found that bar to be set perfectly at my shins. Generally easy to jump over, but occasionally tripping the hell out of me. The boss fights in particular seemed out of place with the general pace and functionality of the rest of the game. The scenarios tend to award creativity and thinking on your feet, the hallmark of an excellent design, but are more than difficult enough to have you stomping around your room like a madman between bouts of getting your ass handed to you on a silver plate by downright surreal enemies.

My biggest problem with this game comes from the left field and has nothing to with the game play, pace, setting, story, or what have you. This problem simply lies in the characterization of the sole female character – Quiet, a sniper rifle touting death machine, clad conspicuously in an ample bikini top and fish net leggings with holes in them. Cut scenes focus on her cleavage, and the overt sexualization has drawn justified ire from more progressive sectors of the gaming community. It doesn’t help that she is relegated to a supporting character role, moreover, that she doesn’t even speak. That really doesn’t help.

For followers of MGS, this characterization is no deviation from the norm. Featuring “Eye-candy girls” is right out of Kojima’s textbook. He himself once stated that the only reason female characters are even sexualized is to help sell figurines and other merchandise. That’s Japan for you, huh? But this time round, in 2015, the characterization has gone up against more scrutiny than ever before. It will likely not change in the next installment (if there ever is one, thanks to Konami selling all its video game assets), but it will be interesting to see how Kojima Productions deals with the changing demands of an evolving gaming market.

All in all, I was thoroughly impressed. The details in this game are simply baffling, and the experience and progression throughout the campaign is flawless.  I’ve only but scratched the surface in terms of this, and I know I’ve got many, many long nights sitting in front of a screen in a darkened room to go before I’ll finally have some solace.