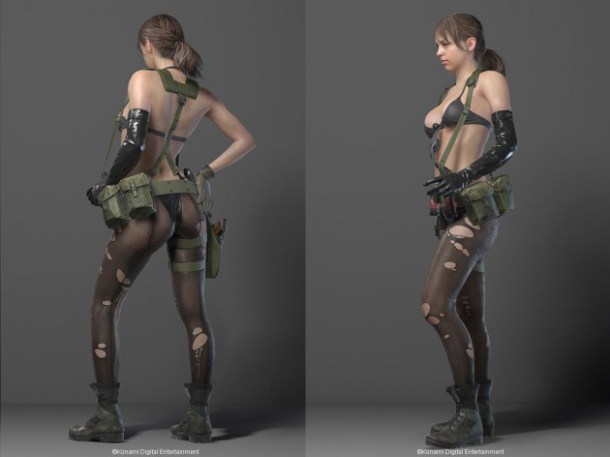 There has been quite a bit of talk surrounding the comments of Metal Gear Solid series creator, Hideo Kojima on Twitter. They almost exclusively surround the issue of a new female character to be in MGSV named “Quiet.” Quiet is a female sniper character who as of yet has not had much revealed other than that and her character design. I’m sure you’ve figured out by now that it’s her character design kicking up all sorts of dust. Kojima claims that there is a good reason for her design that will make us all look foolish for questioning him, could that really be the case?

At first glance you might think the scantily clad sniper is a character ripped out of a fighting game rather than the next Metal Gear Solid game. A busty woman in a black bikini with ripped fishnets and a pair of boots, she looks like she’d rather be modeling in a gun enthusiast calendar than being a game. While I don’t think I can call her lower bikini a thong, it is certainly thong enough to qualify as ridiculous. Nothing says “battle ready” like a top that can barely hold your breasts in and a bottom that doesn’t even try right?

Despite the fact that most people take one look at the character design and scoff, that hasn’t slowed down Kojima’s defense one bit. Though he began by specifically saying her design was altered to be sexy in order to encourage cosplayers and figurine sales, he now claims that the design has deeper roots within her character. On Twitter Kojima put out a series of tweets explaining (sort of) why everyone has the design of Quiet all wrong. These appear to be in response to an open discussion on how inappropriate most people find the characters garb to be.

Kojima’s defense, split between multiple tweets, was as follows:

I know there’s people concerning about “Quiet” but don’t worry. I created her character as an antithesis to the women characters appeared in the past fighting game who are excessively exposed. “Quiet” who doesn’t have a word will be teased in the story as well. But once you recognize the secret reason for her exposure, you will feel ashamed of your words & deeds. Theme of “MGSV” is “GENE”⇒”MEME”⇒”SCENE”⇒”PEACE”⇒”RACE”. Story touches the misunderstanding, prejudice, hatred, conflict caused by the difference of language, race, custom, culture, and preference. The response of “Quiet” disclosure few days ago incited by the net is exactly what “MGSV” itself is.” 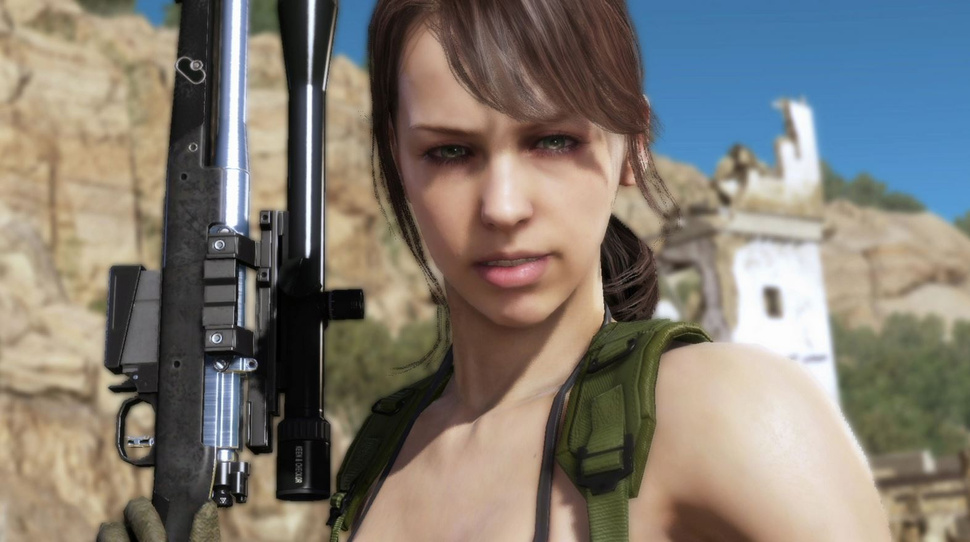 There are a few issues with this defense, the main one being that it looks that the ravings of a madman scribbled on some prison wall. If you get past it’s strange nature we can move on to his claim that she was designed as the “antithesis” of fighting game girls. For Kojima’s sake I’ll assume he means something closer to parody since his word choice was clearly inaccurate.

Next you have to wonder in what way a large breasted, scantily clad woman is going to show off the depths of cultural misunderstanding and bias. The only cultural difference it seems to reflect is that in most countries the issue of sexism in gaming is regularly talked about and debated these days. In Japan however that conversation seems to be slow goings and barely started. Is the misunderstanding of culture, that she is supposed to show, highlighting how it’s okay in Japan but not in the other parts of the world. And we just need to accept it?

Following the unveiling of Quiets character model one of the designers of Halo, David Ellis, came out publicly with his own opinion on her design. Ellis openly criticized the decision to give her little clothing by saying that he found the design to be, “disgusting” and that the, “industry should be better than this.” You know what Mr. Ellis? I agree.

In the past few months there have been a number of articles on GeekInsider specifically written about sexism in gaming. None of them has to repeat each other or tread the same ground because there is just so much damn material to work with on the topic. Even if Kojima really has the character designed as a commentary on the sexism towards female character design in games then he’s done it wrong. You can’t make someone sexy to encourage cosplay and marketing then say you’re making a point with it. The only point being made is that you’re willfully participating in the problem and trying to leave yourself an out in case it gets too hairy. Kojima has become the guy who says he listens to Nickelback “ironically” so nobody will give him crap for it.

If Kojima is God, then we’re all doomed to a misogynistic reckoning.

Check out why sexism is an issue in gaming with the other articles we’ve had covering the issue:

A Call To Arms: Why I Wants Male Gamers To Stand With Us -Emma Marshall

Why Do Game Companies Insist on Video Games Being a Boys Club? -Frederick Johnson II