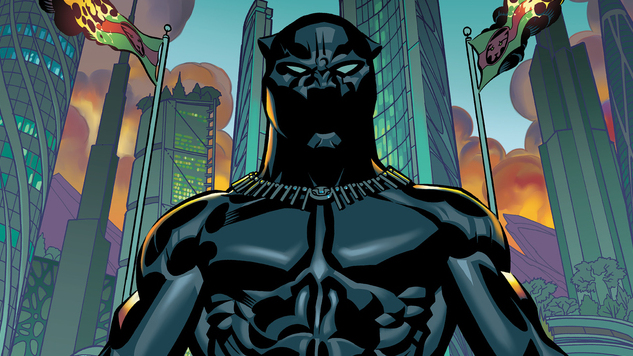 The newest film on the Marvel Cinematic universe, Black Panther is smashing presale records. More people are getting into the Panther and hopefully they’ll also get into the comics on which the movie is based. If you’re one such person, or just want to read, we’ve got you covered.

Ta-Nehisi Coates (The Washington Post, Between the World and Me) entered the world of comics with a radical take on Black Panther titled A Nation Under Our Feet. Coates begs the question: It’s 2018, why does the most powerful nation on Earth still have a monarchy? The Panther faces upheaval of the people and the betrayal of his trusted bodyguards, a team of women called the Dora Milaje. The second story, Avengers of the New World, has T’Challa attempting to discover why Wakanda’s Gods have forsaken them. He also encounters Klaw, the man responsible for his father’s death.

It’s collected digitally and in paperback, each also reprinting a classic Black Panther story. The entire Nation Under Our Feet Story is also collected in hardcover.

In addition to the main book, Coates’ Black Panther has been popular enough to establish several spin-offs. Coates also co-wrote World of Wakanda with Roxane Gay and Yona Harvey. This series marks the first time black women wrote for Marvel Comics. It’s also one of Marvel’s only books with queer leads. Focusing on Ayo and Aneka of the Dora Milaje, it’s a romance beset by the recent tragedies of Wakanda in Marvel continuity.

Coates and Harvey also wrote Black Panther and the Crew, which focuses on a team of prominent black superheroes reintroduced in Coates’ main run. The Panther does not feature heavily. There is also a new take on the origin by Evan Narcisse, Rise of the Black Panther, currently being released in single issues, with a paperback to come later this year. 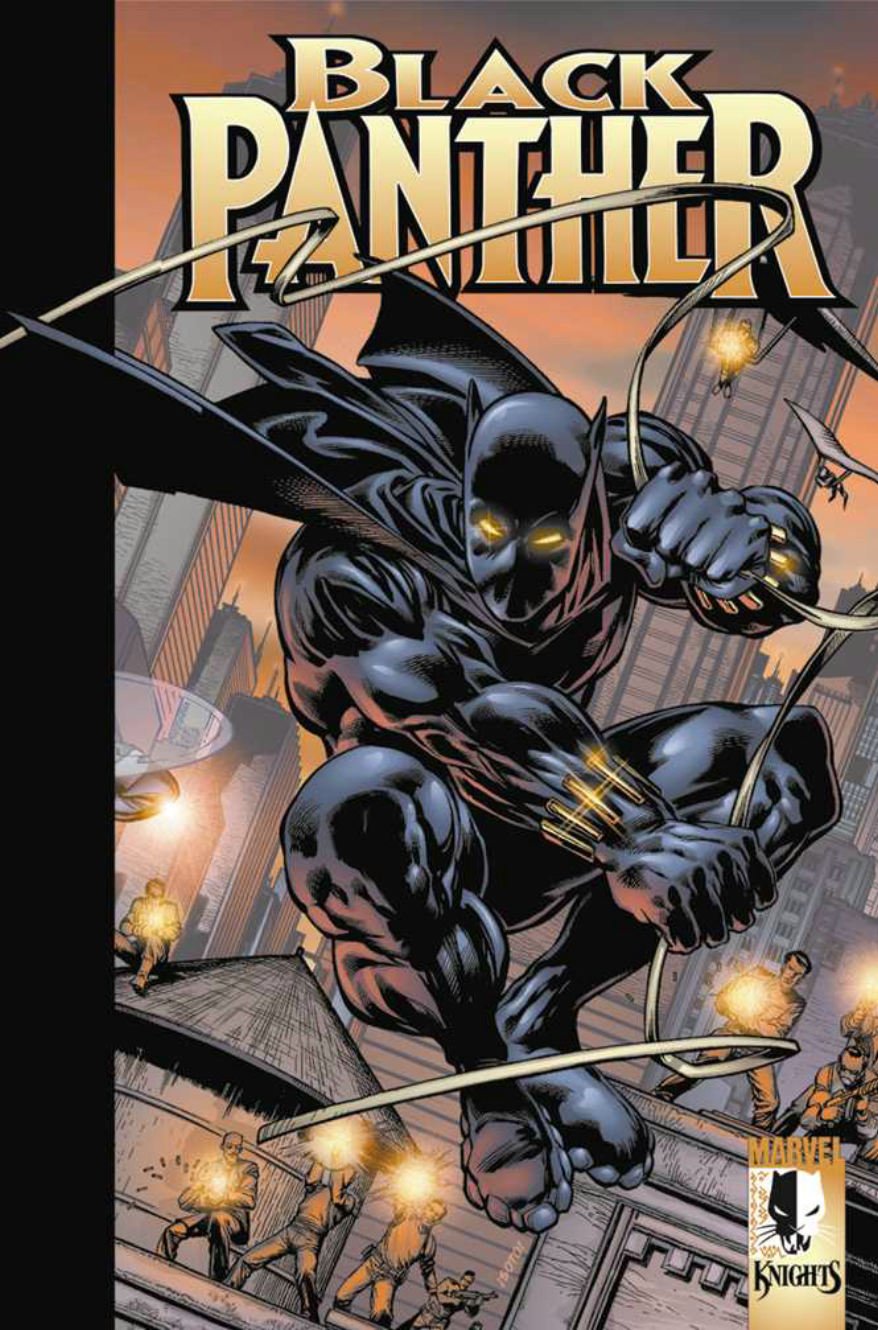 Christopher Priest launched an ongoing Black Panther title in 1998 as part of the Marvel Knights line, an imprint that took a more adult look at some of the company’s darker superheroes.

Black Panther was among the launch titles. Focusing on the politics of Wakanda, it was among the first series to examine how Wakanda worked as a country besides lip service. T’Challa is colder in this than in previous incarnations, something other characters as well as he himself, points out.

The reader’s entry point character was Everett K. Ross, US liaison to Wakanda. Priest uses him brilliantly to provide context for the “expected audience” of superhero books: white males. As a result, he’s the butt of the jokes, though he’s in on it as much as he suffers. He also serves to provide a sounding board for T’Challa and is a confidant and friend.

It defined the character for the 21st century and seems to have established a lot of basis for the movie. Available in four paperbacks and digitally.

Reginald Hudlin took over after Priest leaves, relaunching the series and proving a revamped origin. The US government is more tense with Wakanda than ever. It doesn’t help that T’Challa marries his childhood sweetheart, the supremely powerful Storm of the X-Men. The two of them take a tour of the Marvel Universe, including siding with Captain America during Civil War and becoming temporary members of the Fantastic Four.

Hudlin reveals the secret history of Captain America and Wakanda and introduces Shuri, T’Challa’s sister who eventually takes on the role of Black Panther herself. Collected in three paperbacks and in digital. There is also a motion comic and a novel adapting the first story in the run, Who is the Black Panther?, with art by John Romita Jr. 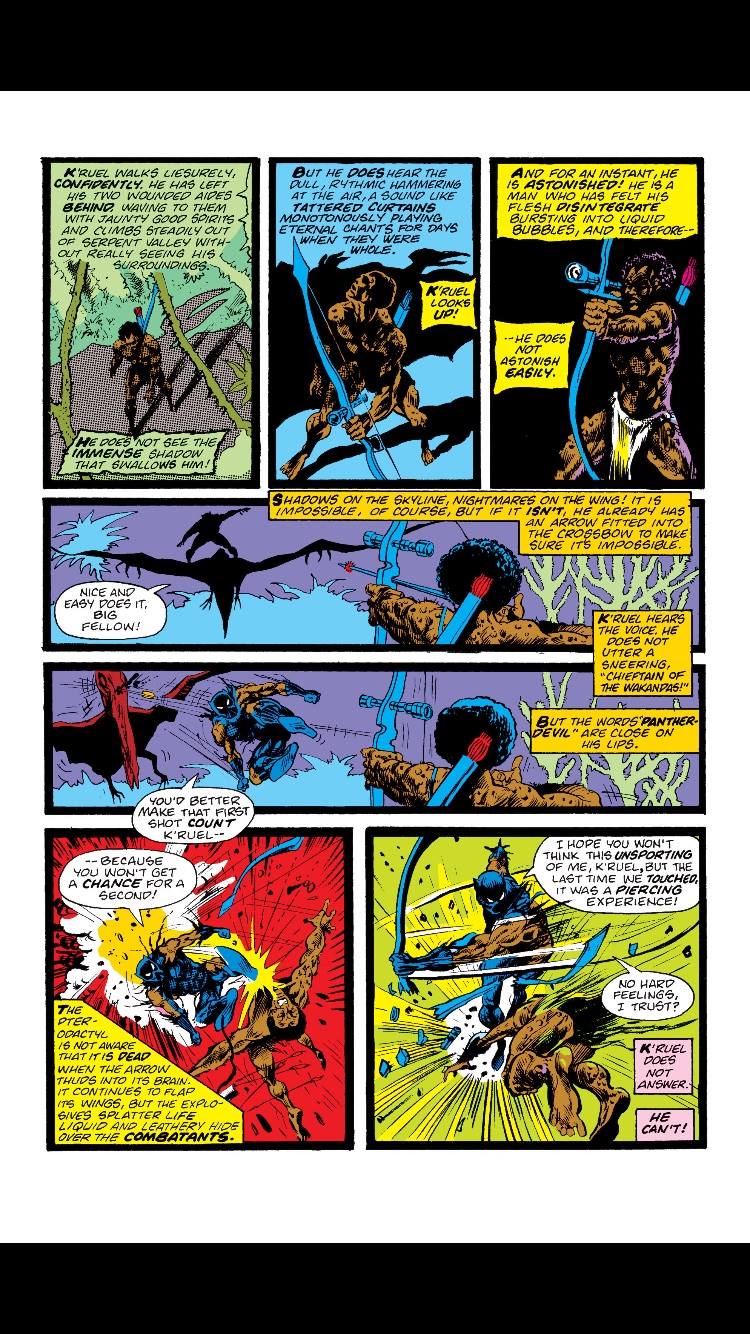 Don McGregor saw that Marvel’s Jungle Action title was failing, so he took over after seeing how successful reprints of Panther appearances from the Avengers series were. McGregor wrote “Panther’s Rage” about Wakanda as a nation at war. T’Challa represented Wakanda. It was being attacked by the brutal Erik Killmonger, it was also at war with the new ideas T’challa’s time abroad brought to the isolationist country.

Considered by some to be Marvel’s first “graphic novel,” that isn’t quite true. It did bring a level of maturity of subject matter and literary sense to the book. Rich Buckler and Billy Graham’s art meet McGregor at the writing level. The battles are truly brutal and you feel for anyone taking a blow.

Also, it has T’Challa riding a pterosaur that gets its head blown off with an exploding arrow. T’Challa leaps off and kicks the Bowman in the face. It might be a well-written sophisticated book, but Killmonger’s ultimate plan is to get some dinosaurs to stomp on the Panther’s temple as revenge for his tribe being destroyed. The second arc, cut shorter than it should have been, focused on T’Challa returning to the US and fighting the KKK.

All of Jungle Action, as well as T’Challa’s first appearances in Jack Kirby and Stan Lee’s Fantastic Four, are reprinted in paperback and digital. The sequel, Panther’s Quest was also recently reprinted. 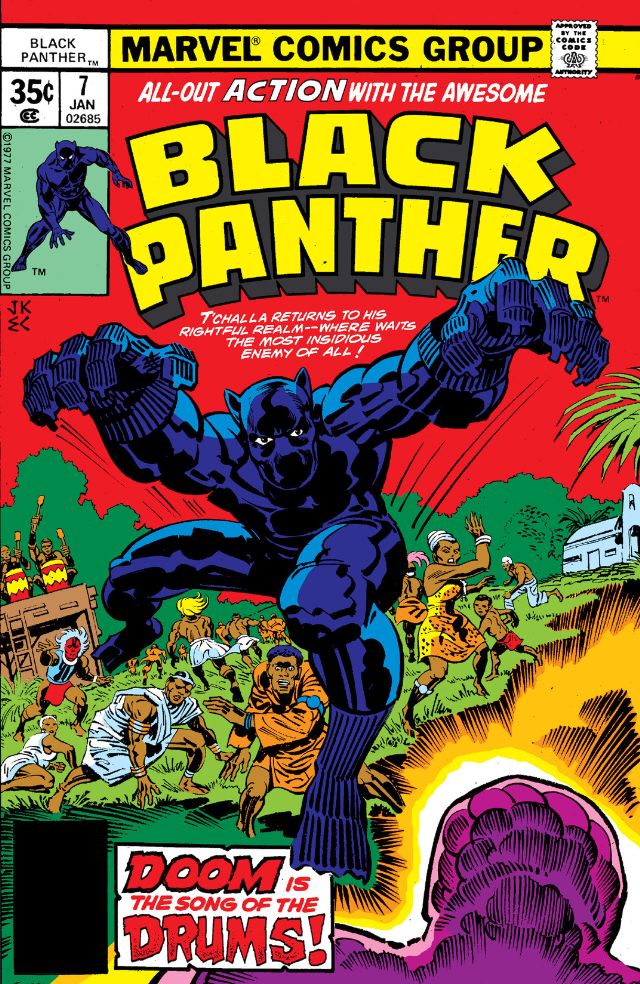 Kirby returned to Marvel in the 70’s after doing his now classic work for DC. One of the series he launched was a new Black Panther book. If you thought dinosaurs to the KKK is a tonal shift, going from that to time traveling frogs is a bigger one.

Kirby refocuses on Wakanda’s afrofuturist roots and sets off on a story of magic, mysticism, and giving T’Challa whatever powers he feels like. This version of the character, as well as the supporting cast, would make humorous appearances in Priest’s run in the 90’s.

Although fun, it is a really weird series. What you’d expect from later Kirby, but not what you’d expect from Black Panther. If you’re cool with something entirely different, this might be the book for you. Not currently reprinted in paperback, although there are some older versions if you hunt them down. Available digitally.