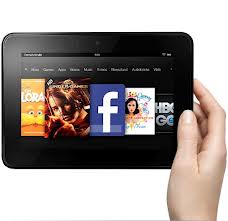 Amazon’s Kindles have come a long way since the original, black-and-white E-readers of yore. The new Kindle Fire HD is an all-purpose tablet, capable for emailing, web-browsing, streaming videos and gaming. 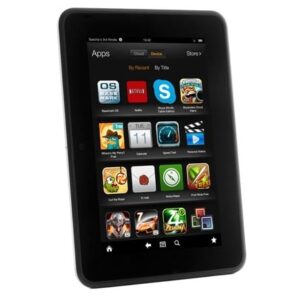 Straight out of the box, the Fire has a sleek, minimalist design. The only noticeable feature on the tablet’s shiny surface is the 1.3 mega-pixel front-facing camera. There is no fixed home button – further adding to the minimalist design. The volume controls, as well as the power switch, are located on the top edge of the device. Amazon have clearly gone to some lengths to hide these controls, resulting in a game of hide-and-seek every time you want to adjust the volume.

One feature of the Kindle Fire HD that stands out from the pack is the display. Amazon claim all kinds of amazing wizardry here with a polarising filter and anti-glare technology. What stands out, however, is the knife-sharp image quality. The Kindle Fire HD boasts a resolution of 1280×800 and a pixel density of 216ppi, making the iPad mini look fuzzy.

The Kindle is powered by a 1.2 Ghz dual-core processor which, although not the most powerful, is certainly no slouch and enables the Kindle is handle HD video and 3D gaming with ease.

The Kindle also comes with some impressive Dolby Digital speakers which generate some considerable oomph.

The one problem with the Kindle that I’ve found is the limitations that have been placed on its software. For example, access to T.V. shows and films is exclusively through Lovefilm Instant which lacks the quantity of media that other streaming services offer. You are not able to switch from the default browser – Silk – either. Which would be fine, except Silk isn’t able to support certain types of online media. Try watching a video on BBC news … go on, I dare ya. Moreover, the Kindle block access to loads of Android content if it is not exclusively Amazon’s. You wont be able to download any competing E-reading app, for example.

The Kindle Fire HD certainly gives you some nice hardware for your money. It’s a shame that it goes slightly to waste with the limited software. Of course, you can side-load your way around many of those issues but it’s a bit of a hassle. Also the Google Nexus 7 ships at exactly the same price as the Kindle … If you’re deciding between the two, go for the Nexus. Every time.