The Golden Globes: A preview and drinking game! 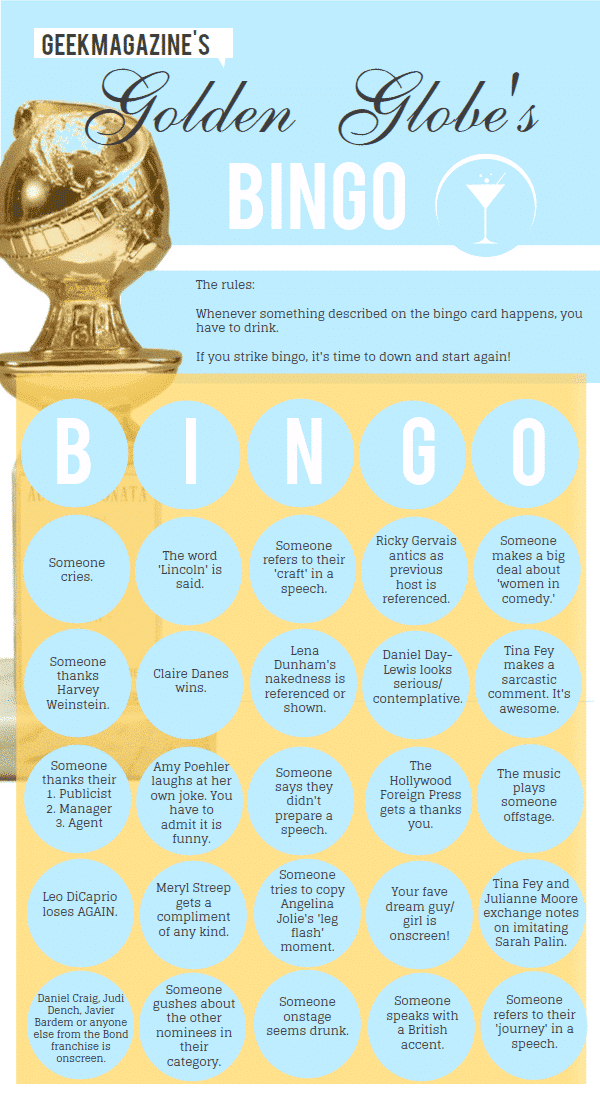 The 70th annual Golden Globes ceremony will take place on Sunday evening. Pop culture fans are as always looking forward to the event as it presents the rare opportunity to see the likes of Judi Dench and Helen Mirren drinking alongside the Lena Dunham’s and Alec Baldwin’s of the world. This year we plan on joining them with our specially prepared Golden Globes drinking game!

The ceremony which recognizes achievements in both television and film will prove to be even more fun than usual this year as it will be hosted by legendary ladies of comedy, Amy Poehler and Tina Fey.

Poehler and Fey who used to co-chair the Saturday Night Live (SNL) Weekend Update desk, now star in and write for their own shows, Parks and Recreation and 30 Rock respectively. Fey is also the creator and runner of 30 Rock which is now in its 8th and final season.

Both women have a proven track record of awesomeness. Tina Fey might be most famous for her Sarah Palin impression, but it was the pure genius of her biography, Bossypants, that turned me into a committed fan. Poehler is similarly iconic. Her SNL characters were some of the best in recent memory; her Parks and Rec character Leslie Knope is similarly revered – and her work ethic aspired to!

In addition to the hosts, we can also reportedly look forward to awards being presented by the likes of George Clooney, Meryl Streep, Kristen Wiig, Megan Fox and Nathan Fillion. Taylor Swift and Adele are slated to present awards too.

The nominees range from amazing films and series to some seriously, “Huh really!?” nominees. Those in the first category include the films Lincoln, Silver Linings Playbook, Zero Dark Thirty and series Girls and Breaking Bad.

In the second category we find critically panned series like Smash, Big Bang Theory and The Newsroom along with portrayals like Nicole Kidman’s in The Paperboy and well… Nothing else was quite that bad.

All-in-all it seems we are in for an entertaining night. The only thing that could improve it would be for us to have a few laughs at the expense of some of the Hollywood stars and perhaps join them in a wee bit of drinking. We thus present you with Geek Magazine’s Golden Globes Bingo!

Aimee works in the online marketing industry in South Africa. She indulges her wide range of geeky obsessions by writing about technology, the internet and all things digital. Aimee dabbles in designing WordPress sites, is a self confessed pop culture fiend and a tennis nerd, as evidenced by her operating a tennis website, shrewdtennis.com. When she's not online, she can probably be found curled up with a book or watching Fringe

The Rise of Triple-A Portable Gaming