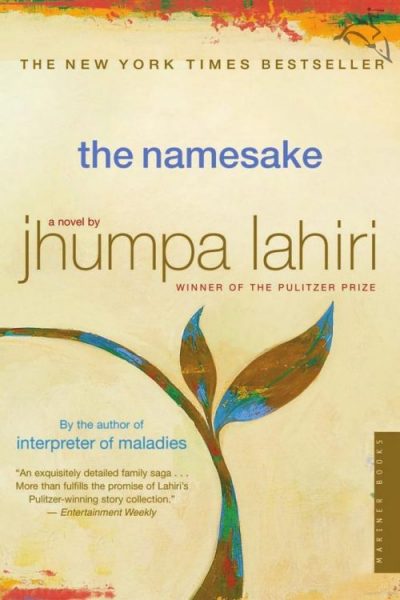 There’s no beating around the bush with The Namesake by Jhumpa Lahiri –  it’s a must have on your e-reader. In this wonderfully crafted novel, Pulitzer Prize winner Jhumpa Lahiri shares an immigrant’s bildungsroman at a noteworthy pace, aligning the rapid effects of cultural assimilation with the fast-changing fluidity of language upon crossing borders.

The novel, structured with a third person omniscient narrator, begins with the birth of Ashima and Ashoke’s first child. Naturally, the story meddles in between the narrative of Ashima’s labor pains with the history of her and her husband’s relationship, discovering how the married couple immigrated to Massachusetts from India following their arranged marriage. In learning about the Bengali culture through the narrator, the naming of Ashima and Ashoke’s baby is not only a crucial plot point early on in the text but it’s also culturally significant and becomes equally problematic. The Bengali practice of naming a child requires a “pet name” and a “good name.” The difference between the two is one measured through kinship, where those who call someone by their “pet name” is an indicator of a close relative, and those who call someone by their “good name” – like the name printed on a birth certificate or a high school diploma – indicates a certain familial gap. In other words, those who call you by your pet name know you very well, whereas those who know you only by your good name know you on a public level rather than a private level.

For Ashima and Ashoke, the naming of their newborn comes with unsettling difficulty as the good name chosen by Ashima’s grandmother – who resides in Calcutta – gets lost in the mail, leaving the couple uncertain of the name to assign to their child. Though the new parents call their relatives in India to uphold the Bengali tradition, Ashima’s grandmother falls ill and cannot remember the good name she sent overseas. This causes Ashima and Ashoke to break tradition, naming their child Gogol after Nikolai Gogol – a Russian writer with whom Ashoke shares a sensitive past. The consequences of Ashima and Ashoke’s decision to do away with two names has a symbolic influence throughout Gogol’s individual development, one that originates from the clash between American-Indian culture.

And yet, Gogol’s parents try to preserve their customs when they send him to school, registering him under his new good name “Nikhil.” But their efforts dissolve when Gogol resists Nikhil, showing discomfort with owning a name that he cannot identify with. In tracing his growth and independence, Gogol associates himself more so with American traditions and distances himself entirely from his roots, eventually changing his name to Nikhil – a choice to remove the obscurity he often felt from being named after a writer who was neither Bengali or American. In changing his name, Gogol demonstrates his resentment for Bengali traditions that he feels marginalized by in America – a tension of origin he struggles with through adolescence, his working life, and through familial and romantic relationships.

Aside from Gogol’s psychological struggles with his namesake, Lahiri’s writing style is also worth observing. In the beginning of the novel, the pace of her sentences are unhurried, somewhat preserved and untouched by the foreign environment Ashima and Ashoke immigrate to. As the book progresses, the sentences feel hurried, naturally leaving gaps, as if in tracing Gogol’s growth into adulthood symbolizes his ethnicity that gets slightly pushed aside. The rhythm Lahiri implements into her storytelling is just another way she expresses the effects of a culturally assimilated narrative.

I purchased the Kindle e-book for only $2.24 on Amazon, and  I definitely recommend reading it for its social observance and Lahiri’s clever literary techniques. The Namesake was also turned into an indie film back in 2006 under the same name.

GameStop Closing 225 Stores Worldwide and Other Stories in ICYMI, The Geekly Roundup #3