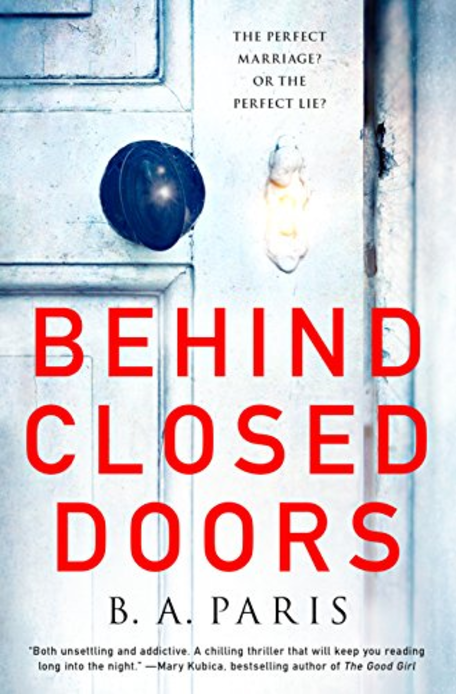 After participating in an Escape Room and failing miserably, I thought I’d take a break from my job as an Essay Assistant and take a swing at reading a novel full of suspense, mystery, and thrill to spruce up my clue-solving skills.

Meet Jack Angel, the epitome of a great first impression; he says the right things at the right time, he’s polite, compassionate and respectful, and shows a tenderness through his line of work as a successful lawyer who defends battered women in abusive relationships. Beyond his notable personality traits, Jack is also extremely good-looking, sweeping Grace—a fruit buyer at Harrods—completely off her feet when he approaches her and her younger sister Millie at a park. Told through Grace’s first person perspective, who shifts between the past and the present with every chapter, the reader becomes Grace’s only confidant who sees into her relationship with Jack when no one else can. When Jack discovers that Grace’s younger sister Millie has Down syndrome, he secures his place in Grace’s life as a life-long caregiver, one who will always understand Grace’s need to attend to her sister and will always provide sufficient funding to support Millie’s development. Taken aback by Jack’s selflessness and kindness, Grace naturally devotes herself to him, saying “I do” after a few short months of dating. Shortly after tying the knot, Jack’s attractive character traits diminish at a cringing speed and yet Grace must obtain the facade of tranquility and content to the outside world.

Behind Closed Doors by B.A. Paris is a take on the deceiving perception of appearances that’ll have you cheering on the protagonist to successfully escape her “perfect” marriage before it’s too late. The novel is anxiety-inducing and thought-provoking, offering an uncomfortable insight into a world of manipulation, illusion, and abuse. Though B.A. Paris offers a well-written work of fiction, there is a serious undertone throughout the novel that paints a very real picture of the it’s too good to be true cliche, one that is realized by Grace in retrospect. However, it’s difficult to condemn Grace for what people might consider as naivety, especially when the repression of one’s individual autonomy is cleverly masked as personal freedom.

Some of the disappointing reviews on Amazon cut the novel short for unbelievability, though I’d have to disagree. Given that Grace’s character was hesitant to reach out for help because she knew her scenario was hard to believe, is exactly why these injurious situations continue to exist in the real world. Appearing unbelievable doesn’t necessary mean that something is untrue, just as appearing “perfect” doesn’t necessarily mean that everything is perfect. I think the novel brings out these misinterpretations as evidence of red flags that go disregarded simply because they seem implausible. Like a good Escape Room, the clues are there, even when they are undetectable—or unrealistic—upon first blush.

The Behind Closed Doors e-book is available on Amazon for $2.60. A lot of reviewers describe the novel as a follow-up to The Girl on the Train by Paula Hawkins, of which there are definitely parallels. It’s a page-turner that puts you in Grace’s perspective, wondering how you would escape under similar circumstances. Although some imagery may produce unpleasant expressions towards the text—as I caught myself producing—I recommend setting time aside to follow Grace’s journey.