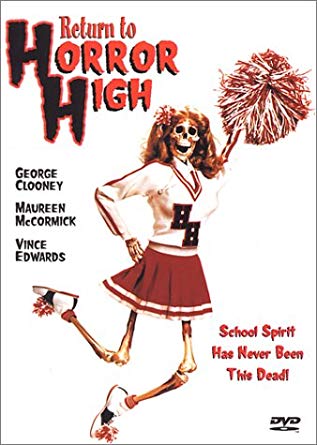 Oh ho, I’ve done it this time. I’ve really stumbled onto something great, I can tell. “Return to Horror High” looks like the kind of cheese that comes compressed in a can, and friends? I am here for it.

The one thing we can say with absolute certainty is that people get killed in this movie. At one point, I think we’re to believe that the killer throws a student from the window, though it looks a lot more like he’s trying to help pull him in. Beyond that, the trailer doesn’t give us too much to work with. It’s clearly a slasher. It seems like it mostly takes place in a high school, which can be rich fodder for B level horror, just ask “Prom Night”. We’ll see how it fares for C-level entries.

I am guessing it’s the janitor. I don’t know why, exactly, other than the only thing that makes sense to me for a cross generational series of killings is this: in the timeline that is alluded to but not shown in the movie-a thing that almost always happens with high school horror films-a student was bullied and wreaked terrible, murder-y vengeance on his tormenters. He was institutionalized, but eventually we learn, in the current timeline, that he was released and under and assumed name, took a job as a janitor at the very same high school that was part and parcel of his youthful misery (dun-dun-DUN!). Once there, he picks up where he left off, murdering the popular kids as retribution for the suffering he endured as a student himself. While I’m never fully ready to write off the “my older sister/brother was knocked out the window by you while you were playing a youthful game, and now I’m going to get revenge on everyone”, I feel like this is more of a janitor revenge tale. My guess, since I’m sure we’re all concerned about baby George Clooney, is that he’s either a cameo or an “and introducing”. He appears to be wearing a security uniform, and I’d bet dollars to donuts (having squandered nearly all my funds on betting with absurd hubris and overwhelming confidence on my consistently incorrect guesses) he gets killed pretty quickly.

Guys, I’m ready. I am going to pop open a box of wine tonight, and see where this crazy ride takes me. I’ll be back shortly to tell you how right-or increasingly likely, how wrong-I turn out to be!