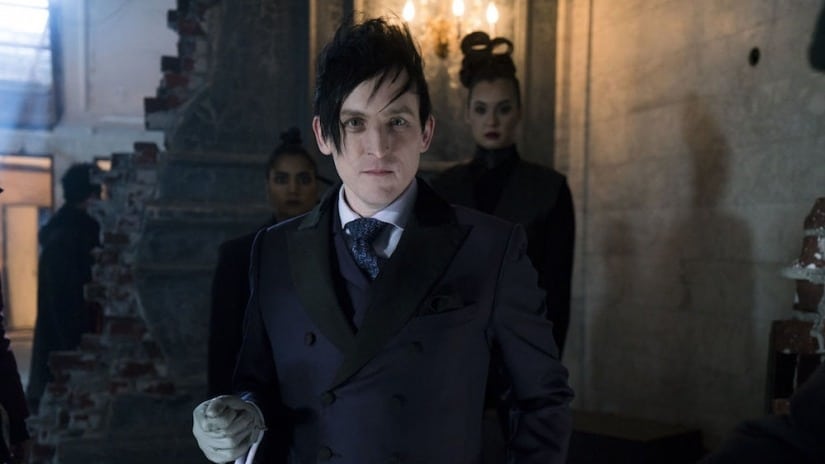 We’re four weeks into this final stretch of Gotham episodes, and I have to admit I’m pleasantly surprised with what we’ve seen thus far. Aside from one rather lifeless installment, it’s been pretty entertaining, which is all we really ask for from this show. You don’t have to make sense, Gotham, but you at least have to be fun to watch.

But “Ruin” is actually a well-written hour of television. Granted, it’s not quite as action-packed as what we saw last week, but it doesn’t have to be. There’s enough going on that it holds our attention without having to rely on outrageous stunts to do it. Of course, not all of it makes sense (and we don’t really expect it to), but the writers are at least trying to tie storylines together and keep the plot moving along with the craziness, which is great to see.

While it may not have been the most newsworthy event of the week, the “trial” of Victor Zsasz stands out to me as the episode’s most poignant moment. Last week’s explosion devastated the Haven refugees, and they just want to feel safe again. And so it doesn’t really matter that Zsasz couldn’t have blown up the building based on the available evidence. It also doesn’t matter that Gotham’s most (second most?) notorious criminal is telling people what they want to hear so he can shore up his power base (sound familiar?). Logic and reason go out the window when people lose hope, and sometimes believing a comforting lie is easier than facing a harsh truth. The real problem is that there are plenty of Oswalds who are willing to spread those comforting lies, and those are the people who need to be stopped.

Fortunately, Jim Gordon is there to save Zsasz from mob rule, but that amounts to a really bad guy (who just happens to be innocent of this particular crime) being protected by—a good guy? Jim is obviously Gotham’s hero at this point, but the show has gone to great lengths over the years to show us that Jim’s not above taking the law into his own hands from time to time. Would he have killed Zsasz? He’s probably bluffing since he knows Zsasz is an expert marksman, but it wouldn’t be out of character for Jim to take out a career criminal—especially since the criminal justice system is essentially defunct.

As for who actually did blow up the building, I’ll admit I didn’t see that one coming (although I probably should have). I was actually thinking at one point that I was getting tired of Ed Nygma’s storyline since it didn’t really seem to be going anywhere. But this makes the slow build worthwhile (at least for now), and I’ll be curious to see what they ultimately do with it. Obviously, Ed’s beef with Penguin has somehow triggered this behavior, and it’ll be nice to see the two of them on-screen together again.

Of course, the big news this week is that we finally have a Jeremiah Valeska sighting! And the even bigger news is that, after all the hype and anticipation, he’s apparently dead. I’ll give the show time to sort all this out for us before I pass judgment, but I just can’t see this ending well. On the one hand, if Jeremiah’s truly (i.e., permanently) dead, and that’s the end of it, then you just got rid of your most compelling villain (other than maybe Penguin), and that would make no sense. On the other hand, since Gotham really loves to bring people back from the dead, there’s a really good chance we’ll see a resurrection of sorts next week. But that’s always seemed like an all-too-convenient way to kill people off without any consequences. Even so, if they can pull it off in a really fun way, we have to remember Rule #1 when watching this show: as long as it’s entertaining, it doesn’t have to make sense.