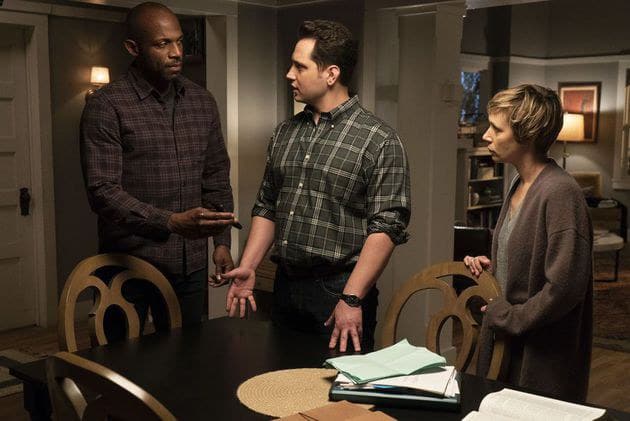 But killing the wrong person? That one’s kind of bad. I don’t think Hallmark makes a greeting card for that—”I’m really sorry I murdered your family member. I could’ve sworn that he was a killer himself, but I guess I got that one wrong. My bad!”

Of course, this is HTGAWM, and the first rule of HTGAWM is that you never take anything you see at face value. So it’s entirely possible that we’ll eventually find out that Ron Miller deserved to die after all. But, based on what we’ve seen thus far, it looks like Nate jumped to a very questionable conclusion and literally beat a man to death for no reason. And that’s something you just can’t undo.

There’s really no excuse for what Nate did. After all, he’s a former police officer who investigates crime for a living, so why didn’t he do his homework? If Asher knew about Miller’s crappy cell phone, how hard would it have been for Nate to find out? Even if you believe Nate’s story—that he just “lost it” and had “no control”—he wouldn’t have been in that state of mind if he hadn’t already decided that Miller ordered the hit on Nate Sr. His “uncontrollable” rage may mitigate his guilt to a degree, but it doesn’t change the fact that he killed a man without having all the facts.

On the other hand, we have to put ourselves in Nate’s shoes. He had just reconnected with his father after years of estrangement, and they were about to start a new chapter in their relationship as the elder Lahey was finally being released from prison. So it’s understandable that losing his dad, especially under obviously sinister circumstances, would be enough to drive a son to violence. It doesn’t excuse Nate’s actions, but it does explain them (at least to a point).

But even if you don’t feel bad for Nate, you have to sympathize with the third person involved in this awful situation—Bonnie. Yes, Bonnie’s done her share of terrible things over the years. But her part in Miller’s death really amounts to nothing more than a mercy killing after Nate beat the life out of him. It’s still legally wrong, but at least it’s morally defensible.

But the roller coaster of emotion Bonnie’s had to ride over the course of this entire affair is truly heartbreaking. She finally trusts someone enough to let them in, and then she finds out that he’s actually a cold-blooded killer. Then she finds out he wasn’t an awful person after all, and that he actually wanted to marry her. But he’s already dead, so it’s too late. So now she not only has to live with the guilt of being partially responsible for his death, but she also has to deal with the fact that this was a rare opportunity for happiness, and now it’s gone forever. Bonnie’s life has been a non-stop tragedy since Day One, so to see her miss out on what could have been a really good thing is devastating.

Meanwhile, Annalise and the rest of the group are trying to manage the Gabriel crisis before he finds out the truth about Sam’s death. Threatening him with exposing his mother as a drug addict/criminal is pretty low, but dirty tricks are just standard operating procedure for Annalise—you do whatever you have to do to protect yourself and those you care about. As much as I admire her brilliant legal mind and her commitment to social justice, her sense of fair play (or lack thereof) can be frustrating at times. And what’s worse is that her students tend to emulate her in ways that are often more harmful than helpful.

It wouldn’t be HTGAWM without plenty of secrets and multiple cover-ups, and lots of crazy things can happen (and usually do). And while criminal behavior rarely gets punished in the traditional sense, the show has a karmic way of making sure everyone pays for their sins eventually.