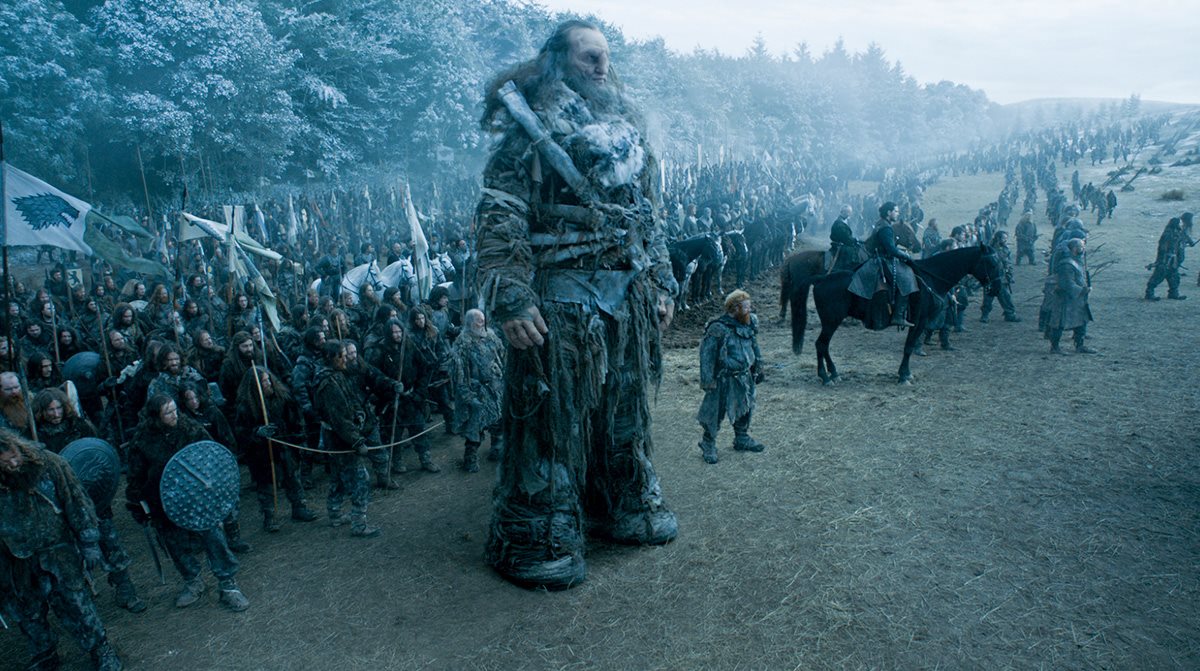 It’s the battle Game of Thrones has been teasing since the first trailer for season 6. Plus it’s the moment we’ve all been waiting for when Ramsay finally picks on someone his own size. The episode titled “Battle of the Bastards” was difficult to watch, yet satisfying. But we have been preparing for the Jon vs. Ramsay showdown for weeks. What we didn’t know was that we were going to get a separate battle on the other side of the world in this same episode. Well, that’s if you can call it a battle. It’s basically just a bonfire at the expense of the Masters. Here’s our recap of the penultimate episode of Game of Thrones season 6.

We’ll start in Meereen. Like we saw at the end of last week’s episode, Daenerys is back after her time away with the Dothraki. She looks refreshed and relaxed… Well not really. Looks like someone has the case of the Mondays. Or she’s just peeved because her city is being attacked. Tyrion tries explaining the good work he’s done while she was away. But now is probably not the best time. Dany has a plan. Daenerys, Tyrion, Missandei, and Grey Worm meet with the representatives from the slave cities. It turns out the slavers didn’t get the memo because they’re thinking Daenerys is surrendering. There’s an awesome shot where one of the slavers is telling Daenerys her reign is over as a dragon approaches in the background. It’s Drogon! He’s so photogenic. He always lands and poses and roars with perfect framing. Daenerys climbs on the dragon’s back and with the help of the other two dragons, who emerge from their underground cave, and they begin to roast the enemies. I may not have a keen military mind, but if I was on a ship and three fire-breathing dragons were approaching, I think I would jump in the water. These folks just seem to hang out on board like they don’t know how this is going to end. Elsewhere in the city, the Sons of the Harpy are back to randomly stabbing folks for no apparent reason. But they don’t last long with Daario leading the Dothraki horde into the city. Back in the “negotiation,” Grey Worm kills two of the three slaver representatives. Tyrion tells the last one to return to the other cities and tell them what happened in Meereen with Daenerys and the dragons. This slaver happens to be the one who bought Tyrion a few seasons back when he was a captive with Jorah. So this is quite the power shift.

Apparently the dragons don’t destroy the whole slaver fleet, which is good because Daenerys needs ships to eventually get to Westeros. Well it looks like she’s going to have some additional boats at her disposal as the Iron Fleet has arrived. In the pyramid, Theon and Yara meet with Daenerys and Tyrion. Tyrion gives Theon a hard time for how he treated the imp when they last met in Winterfell back in the beginning of season one. Dany seems open to this budding alliance. The Greyjoys offer her all of their ships if she helps them overthrow Euron for control of the Iron Islands. A few more conditions are applied. Firstly, Daenerys would grant independence to the Iron Islands. But the Iron Born must no longer get involved in any “reeving, roving, raiding, or raping.” They also should avoid reading, racing, rapping, and use umbrellas when it’s raining. Yara and Theon reluctantly agree.

In Westeros, it’s the eve of battle. Jon, Sansa, Davos, and Tormund meet with Ramsay, Harald Karstark, and Smalljon Umber. Ramsay offers Jon a chance to surrender. Jon offers Ramsay a chance to fight one on one and avoid the battle entirely. They both decline. Ramsay admits that he doesn’t know how good a swordsman Jon is, but he knows his army is bigger than Jon’s. So he’ll take his chances in battle. After Smalljon reveals Shaggydog’s head to prove they have Rickon, Sansa tells Ramsay that he is going to die tomorrow. Ramsay doesn’t appear to be too bothered by the threat. So back in camp, Jon and his people discuss battle plans. Sansa tells Jon off for underestimating Ramsay and not waiting to gather a larger army. Jon insists there was no one else to rally to their cause. Sansa… is there something you would like to tell us? Maybe another army offered their services to you? We’ll get to that later. Jon visits Melisandre and tells her not to bring him back if he dies in battle. She beats around the bush, but basically makes no promises, claiming the Lord of Light does what he wants. Across camp, Davos and Tormund discuss their dead kings, Stannis and Mance. They admit that maybe they were following the wrong people the whole time. Davos wanders across the area where Shireen, Stannis’ daughter, was burnt to death last season when Stannis’ army camped in the same area. He finds the small wooden stag he whittled for her. It doesn’t take him long to figure out what really happened to the girl. Apparently he didn’t realize Melisandre burnt her at the stake.

The next day, the battle is ready to commence. Ramsay’s side builds the ambiance by outfitting the battlefield with some flaming crosses equipped with flayed corpses. I think waving their flag with the sigil on it would have sufficed. In case we forgot how horrible Ramsay is, he plays one more heartbreaking game with our emotions. He unties Rickon and tells him to run across the field to Jon. But here’s the catch. Ramsay is going to shoot arrows at him while he does it. Jon rides out to meet Rickon as the arrows come closer and closer to the youngest Stark. But of course right as Jon gets to him an arrow strikes him. Rickon! Couldn’t you zig-zag a bit while running? Change up your running speeds, stutter step, something!? But no, he just ran in a straight line and now he’s dead. With Jon out of position, Ramsay orders the cavalry to charge. The plan for the Stark side was to wait for the Boltons to attack them, but Davos is forced to act with Jon facing certain death out in the open. So he has his cavalry charge also. The ensuing battle is a mess of blood, mud, corpses, and horses. That sounds like the worst Dr. Seuss book ever. Davos holds back his archers for fear of hitting their own men, but Ramsay doesn’t care about that, ordering wave after wave of arrows while sitting safely away from the bloodshed.

With the bodies piling up, the Bolton forces surround their enemies with shields and spears. They push in, killing more men as they go. Smalljon leads a group over a hill of corpses to prevent the men from escaping their entrapment. The whole scene is incredibly claustrophobic. Jon falls at one point and gets trapped by his own men. I get uncomfortable even thinking about that moment as Jon gasps for air under the weight of the crowd. Tormund and Smalljon come head to head in the melee. It looks like Tormund is about to meet his end at the hands of a man who enjoys nothing more than killing Wildlings. But then a horn sounds in the distance. It’s in that moment of confusion, that Tormund proceeds to bite a chunk out of Smalljon’s neck and stab him to death. The horn is sounding the arrival of the Knights of the Vale. We see Little Finger and Sansa with them. It doesn’t take long for the mounted knights to break down the Bolton formation. Ramsay hightails it back to Winterfell believing that the walls will protect them from the now depleted enemy. Well Ramsay, I guess you forgot about Wun Wun. The giant breaks down the door to the castle, but gets bombarded with arrows as he does it. Jon, Tormund, and a small force join him. Wun Wun looks to be nearing his end as he and Jon share a look. Then Ramsay shoots him in the eye… because he sucks! Panicking, Ramsay tells Jon that he’d like to settle things in single combat now. Jon doesn’t say anything, but begins to approach with nothing but a shield. Ramsay shoots a few arrows, but Jon blocks them all and proceeds to give Ramsay the beat down he deserves. He stops short of killing him when he notices Sansa looking on. Really though!? Is Ramsay actually going to survive this?

Well no, he isn’t. But first, we have to do some redecorating. The Stark banners replace the Boltons’ outside the walls of Winterfell. Jon orders Rickon to be buried in the crypts. If we were told another Stark would die this season, Rickon probably wouldn’t be the one we guessed. But he’s gone the way of Ned, Catelyn, Robb, and Talisa. I guess Jon also died, but he doesn’t really count since he’s alive again. Later on, Sansa visits Ramsay, who is now tied up and all bloody. He starts right back up with his mind games. This time Sansa ain’t having it. Ramsay realizes he’s in the kennels. He claims the dogs would never attack their master. But Sansa brings up Ramsay’s earlier threat that he would feed Jon and his advisors to his dogs after starving them for several days. After a bit of hesitation, the dogs begin to tear into Ramsay. Sansa walks away, the slightest smile crossing her face.

With such a big battle, and this being Game of Thrones, I was expecting major deaths for our heroes. But in the end, we have to be okay with the casualties we suffered. Poor Rickon and the always-impressive Wun Wun died, but the main death to be considered is that of possibly the worst (human) villain the show has seen, Ramsay Snow/Bolton. Game of Thrones will never be the same. I mean that in a good way. Ramsay was the worst. Only one episode left in season 6! I bet it’s a good one. See you next week.