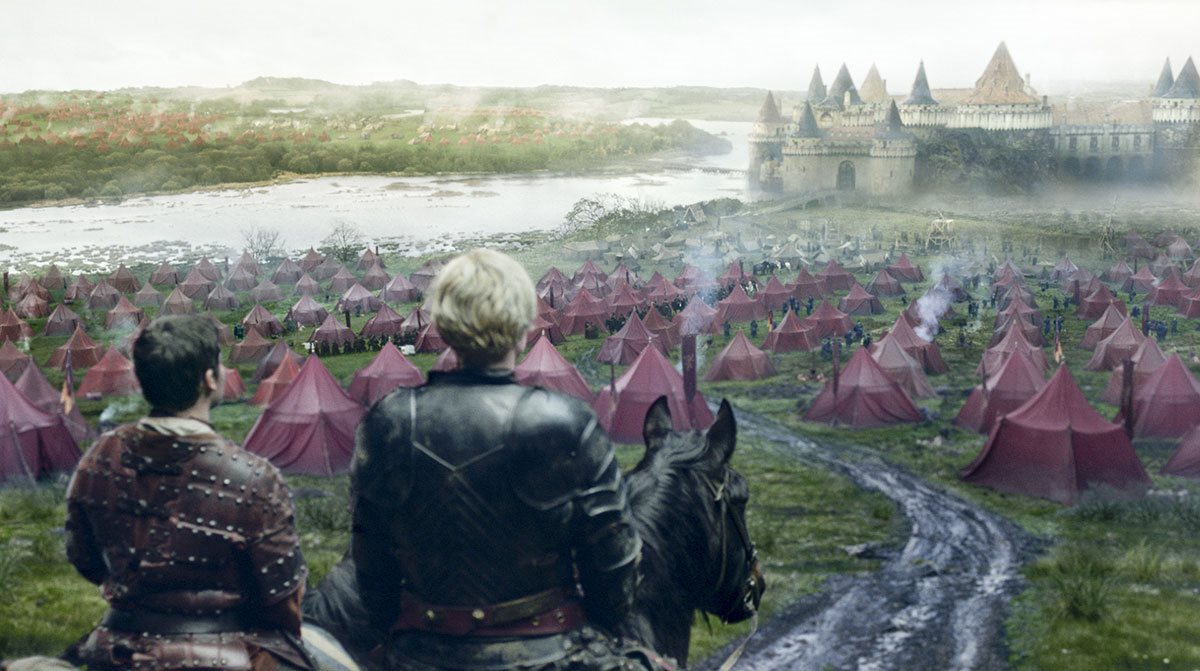 For a storyline that was so mind-bending, Arya’s back and forth struggle with the Faceless Men and the House of Black and White seems to have ended in a pretty straightforward way. The good ol’ kill you with a sword technique. But what wasn’t so straightforward was the rest of the episode, titled “No One.” More old characters returned, of course. While some other storylines seem to have stalled in frustrating ways. And sadly it looks like we’re making blackened fish sticks in Riverrun. Here’s our Game of Thrones recap for the eighth episode of season 6.

We’ll start down in King’s Landing, where Cersei is having yet another bad day. Well, it starts off okay. Lancel and the Faith Militant visit the Queen Regent in the Red Keep to inform her that the High Sparrow would like to see her in the Sept of Baelor. But Cersei isn’t falling for that again. Last time she was there, the dude shaved her head and made her walk through the streets naked. So she tells her cousin/ former lover that the Sparrow can come to the Red Keep if he wants to chat. When they push a bit more, we finally get to see Frankenstein’s Mountain in action. He grabs one of the Sparrows and proceeds to rip his head off of his body. I’m not sure, but I think I heard the Mortal Kombat narration, ”Finish him!” right before he did it. So that’s a small victory for Cersei. But later in the throne room, Tommen messes it up. He announces when Cersei and Loras’ trials will be held. He also announces that trials by combat are no longer permitted in place of a traditional trial. So that’s a bit of a hiccup for the accomplished knight Ser Loras and Cersei, who has the Mountain with her for that very reason. As the scene ends, Qyburn tells Cersei that a rumor she had him investigate has proven to be “more, much more” than a rumor. What could the rumor be? Maybe the High Sparrow is Ned Stark in disguise! He somehow reattached his head… Okay maybe that’s not it. Hopefully, we’ll find out soon though.

Elsewhere in Westeros, the recently pacified Sandor Clegane, has been un-pacified. He brutally cuts down some members of the Brotherhood without Banners after they killed his whole group last week. We’ve seen a lot of killing on Game of Thrones, but axe to the crotch may be a new technique we haven’t yet seen. It seems to be pretty effective too. As the Hound continues his quest for vengeance, he comes across a few familiar faces in Beric Dondarrion and Thoros of Myr. They’re in the process of hanging the others responsible for the massacre of last episode. It turns out the rebels were acting on their own and not representing the Brotherhood. We also learn that the fancy outhouse they were building last week was actually a sept. Well that makes much more sense. After Clegane insults archers everywhere and barters for how many of the remaining rebels he can personally kill, he enjoys some food with his former captors. You may recall the red priest, Thoros of Myr, resurrected Dondarrion a few seasons back after Clegane killed him in a trial by combat. Well apparently that’s water under the drawbridge because they try to recruit the Hound to their cause. It would seem they intend to head North and fight the real threat. We know that to be the White Walkers. In a crucially important scene, they show the Hound whip out his business and relieve himself in stream. Just another quality moment you won’t see anywhere else on television. The Hound’s response to the invitation is left unanswered at this point.

We spend a lot of time at Riverrun this week, but it doesn’t go the way we hoped. Brienne and Pod arrive to bring Sansa’s request for help to the Blackfish. But they are met with the Jaime led siege of the castle. So she requests an audience with him first. The old pals clearly want to work together, but they aren’t on the same side currently. Brienne tells Jaime of the plan to bring the Blackfish and his forces North. So she suggests that if she can convince the Blackfish to surrender the castle, then Jaime will allow the Tully forces to leave unscathed. He agrees. Brienne then tries to give the sword, Oathkeeper, back to Jaime but he refuses. While these two chat, Bronn and Podrick have a fun reunion outside. It gives us a bit of a respite from the tense drama. Not surprisingly, the Blackfish doesn’t like Brienne’s idea and insists on staying.

Outside the walls, Jaime visits the captive Edmure Tully. Edmure, who has been wholly worthless in his time on the show, has a great exchange with the Kingslayer. The Tully wonders how Jaime can live with himself. They talk about the similarities between Catlyn Stark and Cersei as committed mothers. We also learn that Edmure fathered a son on his (red) wedding night. Apparently that was going down while all of his allies were getting murdered. Jaime tells Edmure that he will do whatever it takes to get back to Cersei. So with the threat of his son (and all the Tullys) being killed, Edmure goes to the castle gates. The Blackfish tells his men it’s a trap, but they let Edmure in anyway since he is the rightful lord of Riverrun. Edmure then proceeds to order his men to surrender the castle. The Blackfish helps Brienne and Pod to an escape boat, but he decides to stay and fight instead of run away. Jaime is informed soon after that the Blackfish died fighting. Jaime sees Brienne and Pod’s boat. They wave goodbye to each other. Aw how sweet… Except for the fact that we don’t get to see the legendary warrior, the Blackfish, fight! Enough sentimentality. More sword fights! I’m interested to see what the point was to this siege. It didn’t really move the story forward at all. So maybe something will come from it soon.

An Imp, an Unsullied and a Slave Walk Into a Bar

Over in Meereen, Tyrion and Varys are quite proud of themselves. Since the deal with the Masters, the city is open for business again. The Red Priests are supporting Daenerys and the Sons of the Harpy are nowhere to be found. Varys leaves to return to Westeros. His plan is to find allies and ships for Daenerys. So it looks like the Mother of Dragons and the Spider will go even longer without meeting. That might be a good thing since he organized the assassination attempt on her life a few years back. Up in the pyramid, Tyrion convinces Grey Worm and Missandei to have a drink with him. They finally give in. Tyrion even initiates some joke telling. But the frivolity is short-lived. A fleet of ships approaches the city. At first I thought it was the Greyjoys! But no, it’s the Masters coming to take the city. As Mereen falls victim to flaming catapult projectiles, Tyrion and Grey Worm debate the best course of action. But that’s okay guys, we’ll take it from here. It’s Daenerys and Drogon! So expect some slaver ships to be served up extra crispy.

Now we move to the main event of the evening. In Braavos, Arya has apparently survived her belly stabbings. We see that Lady Crane has taken Arya’s acting advice as she gives an emotional performance as Cersei in the Westeros play. When she gets back stage, Arya is waiting for her in bad shape. Lady Crane patches her up. Apparently Lady Crane beat up the actress, Bianca, who took out the hit on her life. But that’s not really that important right now considering the Waif is coming! She shows up as a dude, who basically looks like the Waif with a mustache. Lady Crane is impaled on a step stool and killed. Arya flees and we get a big chase scene through the streets of Braavos. It has everything. Parkour, falling down the stairs, destruction of property and a lot of wasted fruit. Will no one think of the fruit?! As Arya begins to bleed again, the Waif catches up to her in a dark room. Arya pulls out Needle and cuts the room’s only candle, making everything dark. Back at the House of Black and White, Jaqen follows a trail of blood to the Hall of Faces. The Waif’s face, all bloody, sits in one of the holes. With Needle drawn, Arya denies Jaqen’s claim that she is now no one. “A girl is Arya Stark of Winterfell and I’m going home.” Jaqen gives a slight nod and Arya makes he way for the door.

With the season’s end rapidly approaching I expected a bit more from this episode. Two epic showdowns weren’t shown on-screen. First the final stand of the Blackfish and then Arya vs. the Waif. I guess the latter was in the dark. So unless we switched over to night vision, we wouldn’t see very much. It looks like next week will be solely dedicated to the Jon vs. Ramsay battle for Winterfell. So that looks epic. Maybe Ramsay will trip and fall on his sword before it all starts. But with a few storylines wrapped up this week, I wonder where those folks will go next. Spinoff idea for the week, a roundtable chat show with Tyrion, Grey Worm and Missandei. It wouldn’t be funny, but wine would make them think they are. Ratings gold!

Rogue One: Darth Vader and Reshoots