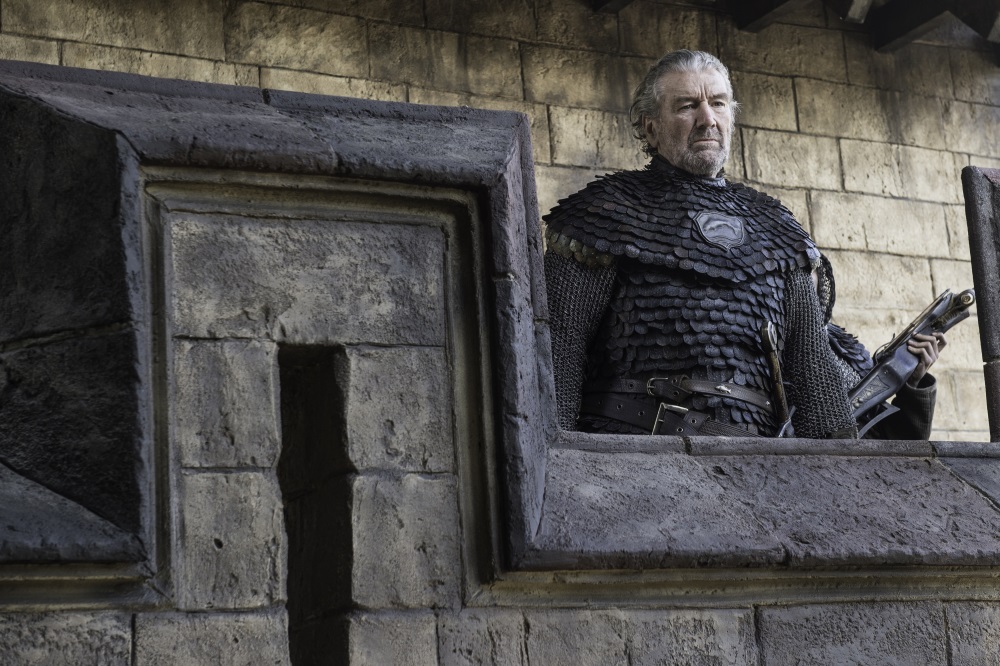 We got a rare pre-credits scene this week on Game of Thrones. I guess we shouldn’t be surprised when it was used to reveal that a presumed dead character, Sandor Clegane/ the Hound, is alive. I picture the show runners sitting around a room of actors whose characters have died and they’re just throwing scripts into the air. You’re alive! You’re resurrected! You’re back on the show after being gone for years! Like last week’s episode, “The Broken Man” is all about moving the pieces forward and introducing new characters while reminding us of old ones who have been gone for a while. Here’s our recap.

How Much Wood Could A Wood Hound Chop…

It’s in the Vale where we find the Hound chopping wood with the same vigor he used to kill tons of people in past seasons. It’s unclear what the group is building, but they’re in the middle of nowhere so I imagine it’s a fancy outhouse or something. He’s reluctant to open up or connect to any of the villagers he finds himself with. But the group’s leader, a septon named Ray, tells us that he found the Hound on the verge of death and nursed him back to life. You’ll recall it was at the end of season four when Brienne bested Clegane in a fight for Arya. Arya then left the Hound to die and went off on her own. Now almost two seasons later, Clegane seems to be slowly buying into Ray’s message of peace over violence. But never has a group of innocent people sat out in a field on Game of Thrones and lived to talk about it. Some dudes from the Brotherhood without Banners show up to extort them, but Ray claims they don’t have anything. Later while the Hound is off in the woods, he hears some screaming. Returning to camp, all of his people are dead and Ray is hanging from the fancy outhouse. Clegane grabs his axe and storms off. He gon’ do some killin’. This mass execution doesn’t seem like the Brotherhood without Banners we met a few seasons back. I guess things have changed over that time.

There’s some really interesting stuff going on in the North if you’re a Westerosi geography major. Jon, Sansa, and Davos are trying to build up their army in order to take on Ramsay and the Boltons. Firstly, with the help of Tormund, they convince the Wildlings to fight with them. The fact that Jon saved them from the White Walkers… then died supporting them… and is now alive again probably helps. Then we see Bear Island for the first time. Lord Commander Jeor Mormont is dead and Jorah is off greyscaling around Essos, but Lady Mormont may be one of the best characters we’ve ever met on this show. She’s like 10 years old, but tough, fair, educated, and badass. Now I’m itching for a scene between Lady Mormont and Robin Arryn, another child leader, where she just continually slaps him in the face until he learns how to rule. (Tommen could probably use that slapping also.) There’s another spinoff idea, HBO. “Iron Throne, Juniors.” Davos convinces Lady Mormont to commit her house to the cause, but she actually doesn’t have very many soldiers. We later see the group of recruiters fail in securing House Glover. They cite Robb Stark’s failure to secure the North against the Iron Born in the War of the Five Kings. In Jon’s army’s camp, we learn that only a few small houses have joined up with them. But Jon believes that, even though they’re outnumbered, they should attack Winterfell ASAP before Ramsay builds his forces even more. Sansa sneaks off and writes a letter. We don’t see whom she’s written to or what it’s about. But Little Finger would be a likely recipient as he has offered his army to them. The Blackfish would also be an obvious ally, but his hands are full at the moment.

At Riverrun, the Lannister army arrives with Jaime and Bronn leading the way. (Another returning character alert. Bronn is back!) When they arrive, they see how poor a job the Freys are doing with their siege of the castle. We already know the Freys stink, Jaime, no need to tell us. Lothar Frey and Walder Rivers attempt to use their secret weapon to get the Blackfish to surrender the castle. They threaten to hang, then cut the throat of Edmure Tully. Not surprisingly, the Blackfish, calls their bluff. Or he doesn’t care if they kill Edmure. That’s even more likely. Jaime takes control of the siege and requests a meeting with the Blackfish. Jaime tries to intimidate the Tully with threats of killing everyone in the castle. But the Blackfish doesn’t bend at Jaime’s threats. He claims to have two years worth of provisions in the castle. So they’re ready to wait out a siege or fight. The whole battle is kind of an annoying one. “We took your family’s ancestral home.” ”Well now, I took it back.” “No, give it back to us, the people who stole it.” But I suppose that exchange sums up most of the fights on this show pretty well.

Down in Frustration-ville, or King’s Landing as it was once called; The High Sparrow and Queen Margaery discuss their faith. The High Sparrow calls Margaery out for her lack of time spent in the marriage bed with Tommen. She probably could have cited the full season she spent in a dungeon, but instead claims her desires have changed since taking up religion. The Sparrow tells her she needs to produce an heir. He then proceeds to threaten Lady Olenna’s safety if she doesn’t join their cause. So Margaery meets with her grandmother under the watchful stink eye of Septa Unella. Olenna wants Margaery to return to Highgarden. But Margaery insists the opposite must happen with Olenna leaving the city. She then slips her grandmother a piece of paper with a rose on it. Thus signifying her allegiance to House Tyrell remains. Later, as Olenna prepares to leave the city, Cersei shows up and tries to convince her to stay and help fight their enemies. Olenna proceeds to diss Cersei for the rest of the scene. She points out Cersei’s lack of friends, her guilt in the entire High Sparrow situation and her general smarminess. Cersei says she’s going to stay and fight. Olenna doesn’t seem to really care.

Across the Narrow Sea in Volantis, the Iron Fleet has docked for a bit. Led by Yara and Theon, the group doesn’t seem too stressed by the idea of Euron inevitably pursuing them and attempting to kill them. They’re just hanging out at a brothel as the show tries to catch up on their bosom quota for the season. Theon is visibly uncomfortable with their current whereabouts, but Yara tries to encourage him to return to his former confident self. Yelling at him and forcing him to get drunk probably aren’t the best methods to build up a man who was tortured into slavery. But I’m sure Yara did her research before hand. She reveals to Theon that they are on their way to Meereen where she will attempt to forge an alliance with Daenerys. So basically she’s trying to steal Euron’s idea and use it to against him.

We end our travels for the week in Braavos where Arya is no longer faceless. In fact she’s so easy to find, she’s basically “faceful.” Hearing a Westerosi trader, she books passage back to her home continent. But in the meantime, she continues to wander around the city. An old lady approaches her looking all innocent and no! Stab, stab, stab! It was the Waif in disguise. Arya really should have seen that coming. She gets stabbed a few times in the stomach before escaping by falling into the river. She emerges a bit later very wounded. But as she wanders through the streets, she doesn’t know whom she can trust.

This season of Game of Thrones has so many twists and turns; it’s been fun trying to guess what will happen next. Like with Arya, it’s a pretty bad wound. How will she survive? What about the impending battle at Riverrun, is Jaime really willing to risk it all in a battle for a castle he doesn’t care about? And to whom is Sansa writing? Maybe she has a pen pal we don’t know about. These questions need answering. Luckily we still have three episodes left this season to get them answered!