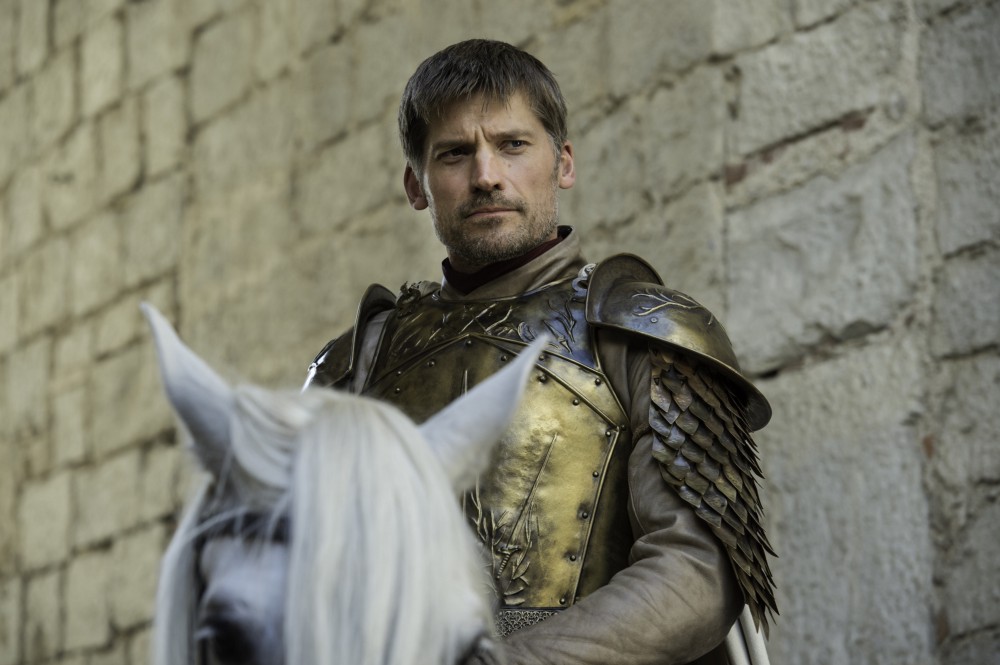 The typically massive cast of Game of Thrones doubled in size this week as a horde of past characters returned to make a big push into the season’s second half. Who is Benjen Stark you ask? I refer you to the first three episodes of the show. Edmure Tully and the Blackfish? Go back to season three. Walder Frey? Also season three. Billy Bob Lannister? Well he wasn’t in the show. I just made him up. But there were enough other reunions to keep us occupied. Here’s our recap of episode six, “Blood of My Blood.”

After the Hodor debacle of last episode, Bran and Meera are on the run from the army of the dead north of the Wall. Bran keeps flashing in and out of the visions transferred to him by the Three Eyed Raven. They’re quick and fragmented, but they include many of the major events from the series and some new footage as well. We see Daenerys’ dragons being born, the Red Wedding, and the White Walker battle at Hardhome. Most of the new moments feature the Mad King’s final moments. We see his command to burn everyone in King’s Landing, Jaime killing him, and there’s even a moment of wildfire exploding underneath King’s Landing, which we know didn’t happen. There’s more to see if you watch the clip in slow motion. But back to the snowy escape. As the wights catch up to Bran and Meera, a hooded figure comes to the rescue. He’s burning bad guys, cutting them down, and generally saving the day. The stranger pulls our heroes up onto his horse and they escape. But we learn that this guy isn’t a stranger at all. He’s Benjen “I’ve been MIA for over five seasons” Stark. The First Ranger from the Night’s Watch was wounded during a battle with the White Walkers, but the Children of the Forest saved him before he died by impaling him with dragonglass. Now he’s a kind of half White Walker, but he’s a good guy. So that’s helpful.

Sam and Gilly arrive at the castle for House Tarly, Horn Hill. Now what in the Sam Hill will Sam be doing here at Horn Hill? Not a whole lot seems to be accomplished really. His mother, Melessa, and sister, Talla, seem nice. They’re happy to see him again and they’re nice to Gilly and baby Sam. At dinner, it seems to be going okay until Randyll, Sam’s father, begins to insult his oldest son. Sam just accepts it, but Gilly tries to stick up for him by pointing out his accomplishments including killing a Thenn and a White Walker. When Sam’s brother Dickon (what a name!) questions the existence of White Walkers, Gilly insists she saw it on the way down to the Wall. This gives away her heritage as a Wildling. Randyll loses his noodle a bit when he hears this. But Sam keeps quiet. After Melessa escorts Gilly out of the room, Randyll says that Gilly and the baby can stay but Sam must leave and never come back. In an emotional farewell, Sam makes the hard decision to leave them behind while he trains at the Citadel. …Then he changes his mind and they leave together. But on the way out, he makes a quick stop to nick the family’s ancestral sword Heartsbane. Randyll ain’t going to be happy about this. But Sam the slayer knows the importance of Valyrian steel these days. He’ll need it when the White Walkers show up.

In Braavos, Arya sees the play about Westeros again to fulfill her task of killing Lady Crane. This time we’re treated to the Purple Wedding. But in this rendition Tyrion is the villain. He kills innocent King Joffrey and goes on to kill Tywin. This death had way more farts than I remember in the actual scene at the end of season four. Backstage, Arya poisons the actress’ rum but is confronted on the way out. Lady Crane takes Arya for an enthusiastic theater fan. Just as Lady Crane is about to drink her tainted rum, Arya hits the glass away and warns her that the other actress wants her dead. I wonder if the prop head version of her dead father watching her had an impact on this ethical dilemma. As Arya leaves, the Waif is watching. Of course she is, that annoying Waif! She tattles to Jaqen who is back in the House of Black and White casually cutting a dude’s face off. He gives the Waif permission to kill Arya. But in the meantime Arya has reclaimed her sword, Needle, from its hiding place. It looks like her mission to become faceless might be at an end.

Back in the Frey

One storyline taking shape in this middle part of the season is the Blackfish reclaiming Riverrun. In a scene at the Twins, the loathsome Walder Frey is yelling at his sons for “losing” Riverrun. They try to justify the situation to their father, but he’s not interested. We learn that House Mallister and House Blackwood are helping the Blackfish. The Brotherhood Without Banners are also involved. The Brotherhood hasn’t been seen in a few seasons. So that may mean Thoros of Myr, another red priest, could be back in play. Resurrections for everybody! Walder insists Riverrun be taken back. His plan is to use his longtime prisoner, Edmure Tully, to force the Blackfish to yield the castle. Whether or not the Blackfish is interested in bartering for his ignoramus of a nephew, we will soon find out.

As really important things are happening with Bran, Jon, Daenerys, and almost all of the other characters, King’s Landing is STILL drudging along with the High Sparrow. King Tommen the whiny meets with the High Sparrow to discuss Margaery’s impending walk of atonement. Tommen seems like he’s okay with it as long as the Sparrow can guarantee her safety. Tommen is allowed to see Margaery, who appears to have actually repented and taken up religion. Meanwhile, Jaime and the head boob of House Tyrell, Mace, lead a small army into the streets of King’s Landing to free Margaery and Loras. Jaime threatens the Sparrows. But before any violence plays out, the High Sparrow reveals that Margaery won’t have to walk because she has recruited another to their religious cause. It’s the king pushover, Tommen. Back in the throne room, Jaime is stripped of his armor and sacked as the Lord Commander of the King’s Guard. He seems to get quite close to saying, “You can’t fire me, I quit!” But alas, he is tasked with leading the Lannister army to retake Riverrun for Walder Frey. He tells Cersei that he plans to disobey this order and kill the Sparrows instead. But she persuades him to take Riverrun and show the full power of the Lannisters. They also make out for a bit to remind us that they’re brother and sister… and they make out sometimes.

On the road back to Meereen, Daenerys and Daario discuss the need for ships to bring her forces to Westeros. He believes they will need at least 1,000. I wonder if it would just be easier to build a giant bridge at this point. But alas, no one in Daenerys’ camp asked me for my opinion. After some wind catches her attention, Daenerys rides off for a minute. She returns on the back of Drogon, who is apparently listening to her now. She gives an inspired speech about choosing all of the Dothraki as her blood riders. She then presents her intentions of taking Westeros. They all yell in agreement. You can’t see me in the scene, but I’m the Dothraki in the back of the line who can only half hear what she’s saying and wonders if she should just build a bridge instead.

With all these returning characters, it will be interesting to see where the last Game of Thrones episodes of 2016 take us. Maybe this one ended up being a bit anti-climactic compared to the huge events season six has brought us previously. But don’t dismiss the importance of things like Benjen’s return and Bran’s visions. We even saw the Mad King! Plus some significant screen time for a dragon. That’s always fun. I’m sure we’ll resume the sad character deaths next week.