‘Game of Thrones’ S6 E3 Recap: Every Snow Has its Thorne 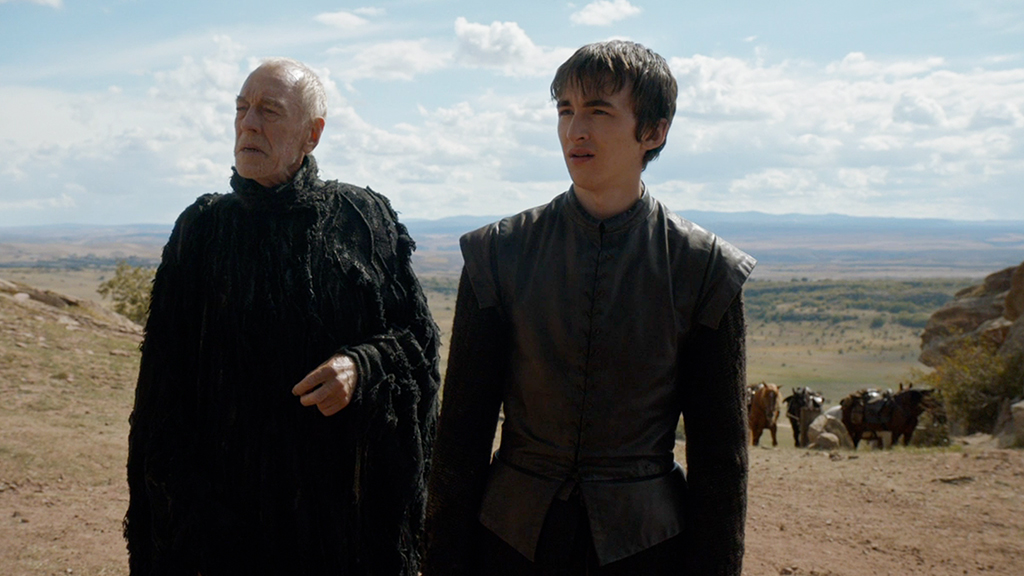 Okay, so no one came back from the dead this week. But with Jon Snow finally up and at ‘em, our focus can turn to some of these other crazy storylines covering the Game of Thrones landscape. In fact, one such scene may just be my favorite to ever appear on the show. Plus Rickon! If GOT is a giant chess game, I feel like all of the pieces are finally finding their way back to the board. This analogy ends at Ramsay though. Last time I checked there was no grinning sociopath chess piece. Here’s our recap for “Oathbreaker.”

Hanging Out at the Wall

The episode both begins and ends up at Castle Black. Jon is awake and a bit freaked out by the whole “I was dead, but now I’m alive” thing. He stands up in the buff to show off his back muscles first. Apparently they have a sick weight room in the afterlife. He tells Ser Davos that he can remember everything up until his death including Thorne, Olly, and the others stabbing him. But after death there was nothing. Melisandre is bummed by this fact. She tells Jon that he was brought back for a reason. She thought Stannis was the prophesied prince in her religion, but since he wasn’t, it could be Jon. He gets dressed and walks outside where a crowd looks on in disbelief. He embraces Tormund. Tormund insults Jon’s “pecker.” It’s all very sweet. Jon also embraces his old pal, Edd.

Later, we see the Jon stabbers have been roped up for hanging. There’s Thorne, Olly, Othell Yarwyck, and Bowen Marsh. Jon listens to all their final words, which include Thorne standing by his actions. He still claims he did what he thought was right for the Watch. Olly doesn’t say anything. He just flashes his favorite constipated facial expression. Jon cuts the rope and they all die. Thus ends the run of one of the show’s original frenemies, Ser Alliser Thorne. Most of the time we hated him, but he had his moments like in the Battle of Castle Black. Ah, we probably won’t miss him though. And Olly, it makes sense you hated the wildlings because they killed your parents, but you were still annoying. After the group hangs, Jon takes off his cloak and hands it to Edd. He says, “You have Castle Black.” Then while walking away, “My watch has ended.” So number one, that’s not how the succession of power works for the Night’s Watch. And two, since Jon died does that mean he’s technically released from his vows as a crow? I suppose we shall find out soon.

With all this craziness around Jon, it’s like we’ve forgotten about his main man, Samwell Tarly! Sam, Gilly, and Baby Sam are on a boat to Oldtown where Sam will attempt to become a maester of the Citadel. But in the meantime, he’s just barfing in a bucket. What else would Sam be doing on a boat? But as Gilly shows her excitement to go to Oldtown, Sam breaks the news that she won’t be going with him since women aren’t permitted. Instead he’s bringing her to his family home at Horn Hill while he trains. We haven’t met them, but the very mention of Sam’s family in previous seasons puts him on edge. In this instance he claims his mother and sister are kind, so they’ll be good to Gilly and the baby. Maybe this sets up Sam’s redemption toward his father. Or maybe it will just be another group of characters introduced to beat up on Sam.

At Winterfell things just keep getting more frustrating. Ramsay and his new flunky Harald Karstark meet with Smalljon Umber (great name by the way). Smalljon correctly assumes that Ramsay killed Roose Bolton while also dropping the news that at some point his father Greatjon Umber (an even better name) died too. We know Greatjon was incredibly loyal to the Starks. Smalljon, not so much. He wants the Boltons to help the Umbers march on the Wall to get rid of Jon Snow and the Wildlings he allowed south. Since the Umbers live so far north, he fears the Wildlings will bother them. Smalljon comes across as a no-nonsense, interesting character. Well until he reveals his goodwill gift to Ramsay. Rickon Stark and Osha, both bound, are presented to Ramsay. To prove Rickon’s identity, Ramsay also receives the severed head of Rickon’s direwolf, Shaggydog. For those a little confused by Rickon’s reappearance, he and Osha went to stay at the Last Hearth with the Umbers right before Bran, Hodor, Jojen, and Meera went north of the Wall. At the time, the Umbers were allies. The death of our pal Shaggydog means that our direwolf count is very low. Jon still has Ghost, Bran has Summer and Arya’s Nymeria is lost somewhere in Westeros. The other three have been killed.

Sticking with our northern characters, the History Channel presented by the Three Eyed Raven is getting quite intense. In this week’s vision a young Eddard Stark, Howland Reed (Meera and Jojen’s father), and others arrive at the Tower of Joy in Dorne near the end of Robert’s Rebellion. The tower is being guarded by Ser Arthur Dayne, “The Sword of the Morning” and Ser Gerold Hightower, “The White Bull.” These nicknames! This scene has been a much talked about story among fans since we know Ned’s sister, Lyanna Stark’s, fate is tied to the tower. The fight outside is also part of Ned’s legend, which we now get to see firsthand. Ned tells Dayne and Hightower, two of the Mad King’s Kingsguard, that both the Mad King and Prince Rhaegar are dead. Dayne says that he was ordered to stay at the tower. At the mention of Lyanna, Dayne proclaims “And now it begins.” “No,” replies Ned in a perfect Sean Bean accent. “And now it ends.” The ensuing swordfight is epic. Reed is injured from the start. Ned eventually cuts down Hightower. Dayne kills the rest of the Baratheon sympathizers. But the one-on-one finale between Dayne and Stark looks very different from the story Bran has been hearing his entire life. Dayne disarms Ned and has the battle all but won before Howland Reed sneaks up and stabs Dayne in the back of the neck. Ned picks up a sword and finishes him. It’s hardly the harrowing victory told in the stories. Ned runs toward the tower as the Three Eyed Raven begins to finish the memory. Bran yells out to his young father. Ned stops for a moment and looks back as if he heard. If Bran can affect these memories he’s visiting then things are going to get very interesting. Like last episode, Bran is disappointed that the memory ends when it does. The Three-Eyed Raven tells Bran that he will not be in the tree forever but before he leaves, he will have to learn “everything.”

In King’s Landing, Qyburn attempts to turn all of Varys’ former “little birds” to his cause to help spy for Cersei. At the meeting of the small council, we see that the group looks very different than it once did. Kevan Lannister, Tywin’s brother, is the Hand of the King. Grand Maester Pycelle, Mace Tyrell, and surprisingly, Lady Olenna Tyrell accompany him. Cersei, Jamie, and the Mountain interrupt the meeting demanding action against the Sand Snakes in Dorne. But Kevan wants nothing to do with Cersei and ends the meeting rather than involving his niece and nephew in their discussions. Across town Tommen finally confronts the High Sparrow. But unsurprisingly, he doesn’t accomplish anything during this meeting. He wants Cersei to be able to visit Myrcella’s tomb. But the High Sparrow informs him that she must stand trial first. Way to go Tommen, you’re useless.

Across the Narrow Sea, Daenerys arrives at the shuffleboard capital of Vaes Dothrak. She meets with the Dosh Khaleen, the widows of former Khals. The Dosh Khaleen elder tells Daenerys that, like she did, they all believed their husbands would conquer the world. Now all the different khalasars have gathered in Vaes Dothrak for their annual conquering and pillaging convention. They don’t call it that, but I picture a bunch of booths giving away Dothraki stress balls. They’re going to decide what to do with Daenerys. Most of the options aren’t very positive. 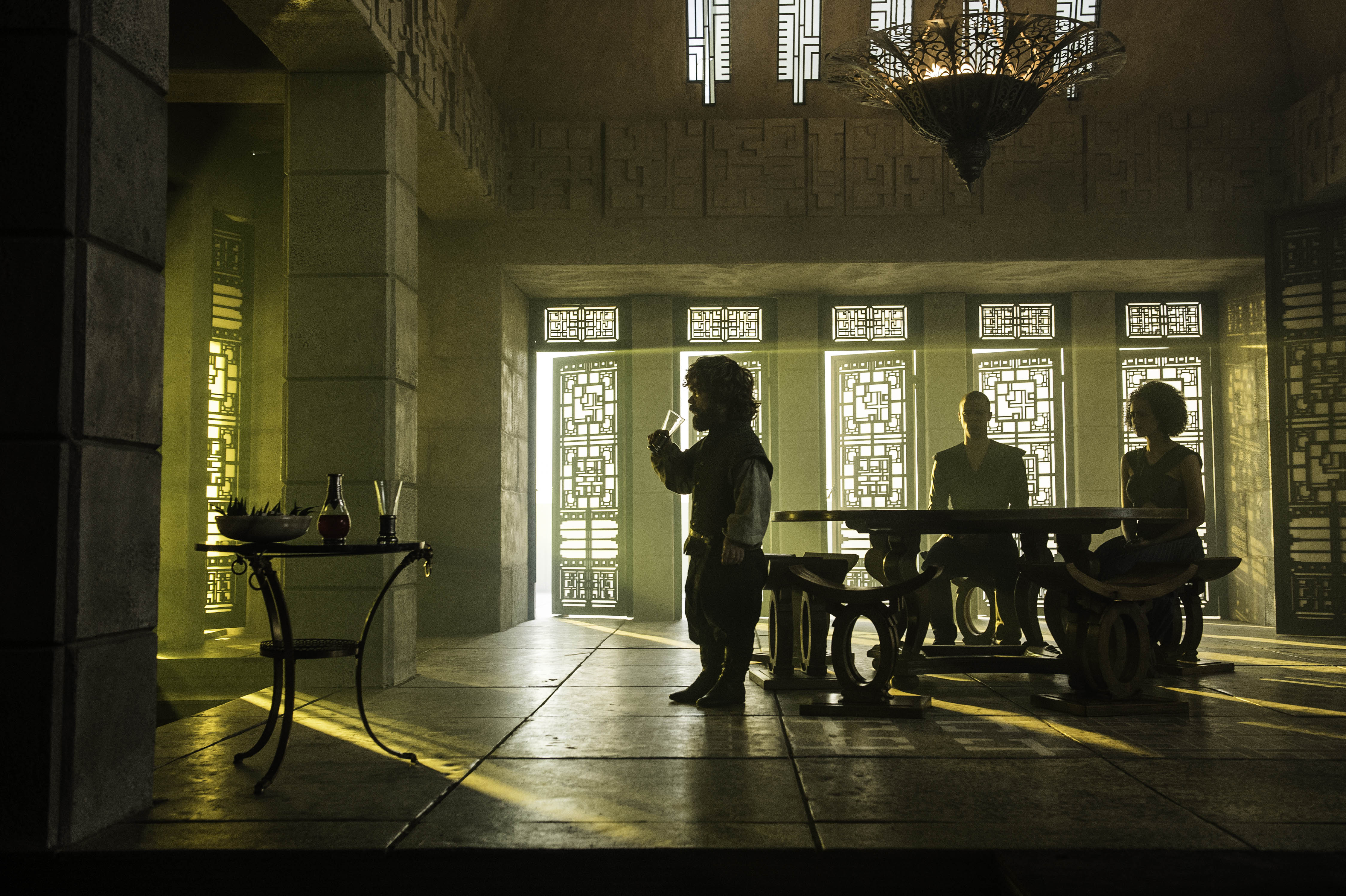 The Daenerys brain trust in Meereen is making a bit of progress though. Varys questions Vala, a woman we saw aide in the murder of an Unsullied last season. She defends her actions by calling Dany’s soldiers foreign invaders. Varys, ever the voice of reason, gives Vala an opportunity for a new start with her son in Pentos with a big bag of silver if she will provide information. Elsewhere in the Great Pyramid, Tyrion is failing at making small talk with Grey Worm and Missandei. Varys arrives and informs them that the slave masters of Astapor, Yunkai, and Volantis have organized the Sons of the Harpy. They can’t go hunt them down though because it would leave Meereen vulnerable. Tyrion asks Varys to use his little birds to send a message to the masters of those cities.

No One Saw this Coming

Our friend Arya’s luck is changing over in Braavos. After being taken back into the House of Black and White she continues stick “training” with the Waif. But what was initially just getting the crap beat out of her actually now has some element of training to it. She has improved quite a bit. Arya gets questioned repeatedly about being no one. She talks about her list of names and her history. Jaqen offers her sight back if she says her name. But “a girl has no name.” Jaqen offers the girl formerly known as Arya a drink from the poisonous well. After hesitating, she drinks. But instead of dying, she opens her eyes and can apparently see once more. I guess she’s no one now. But I’m still going to refer to her as Arya.

So it’s another big episode for Game of Thrones season six. They’re 3 for 3 if you ask me. These are epic episodes with tons of important stuff going on. The Ned Stark flashback was an awesome moment. They already have their actors. Let’s turn that point in history into its own show! I know I said the same thing last week about the Hodor flashback. But these scene are just so amazing! Young Ned, Arya can see, Rickon’s back, Jon’s out at the Watch, Sons of the Harpy exposed, and more. What a show we’re watching. If you can’t tell, I’m all in on season six.