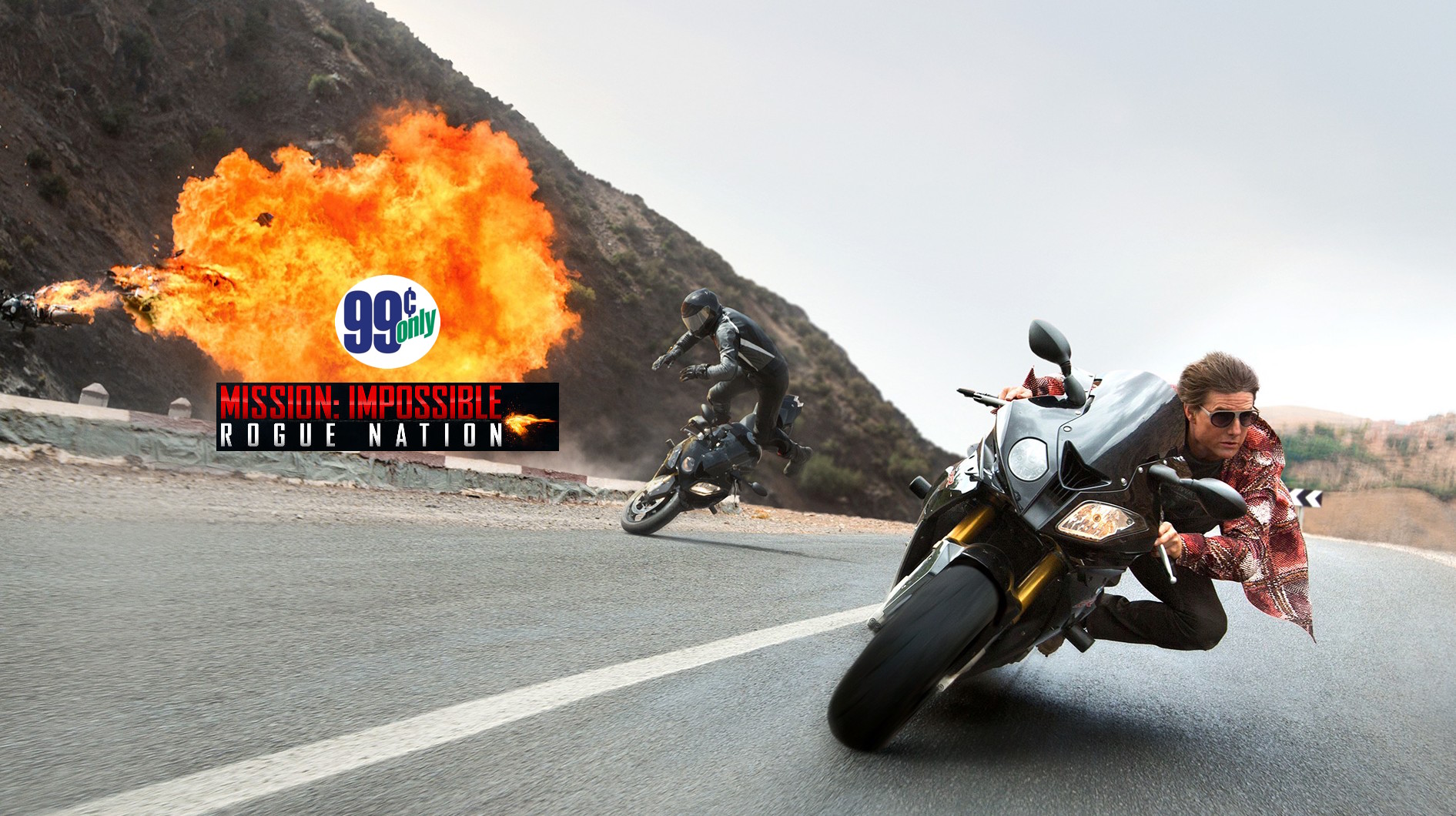 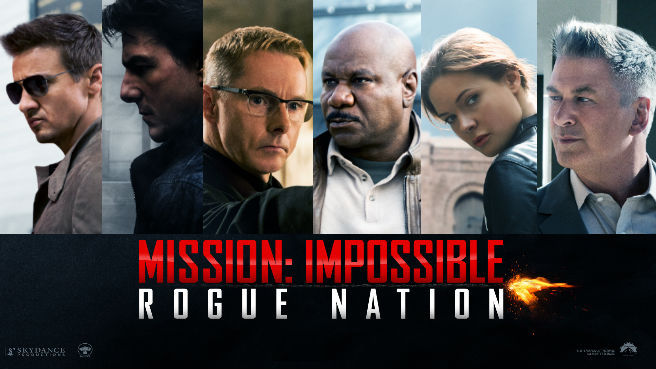 You Have Your Seatbelt On?

After a series of destructive – yet successful – missions, a brash U.S. Senator (Alec Baldwin) is out to put an end to the IMF (Impossible Mission Force). Meanwhile, a nefarious organization called The Syndicate is hell-bent on world domination – and also eradicating the IMF. Not on Ethan Hunt’s (Tom Cruise) watch. Attacked from every angle, Hunt and his rogues gallery of fellow agents (Simon Pegg, Ving Rhames, Jeremy Renner et.al.) finally go rogue in hopes of stopping The Syndicate and redeeming themselves to the very government that wants to dismantle them. Think that sounds impossible? Think again. ‘Cause you’ve just walked into the world of Mission: Impossible – Rogue Nation and the impossible is what Hunt & Co. do for a living. Luckily, they do it quite well. And Rogue Nation achieves the impossible by adding a fun, highly entertaining new chapter to the aging franchise. 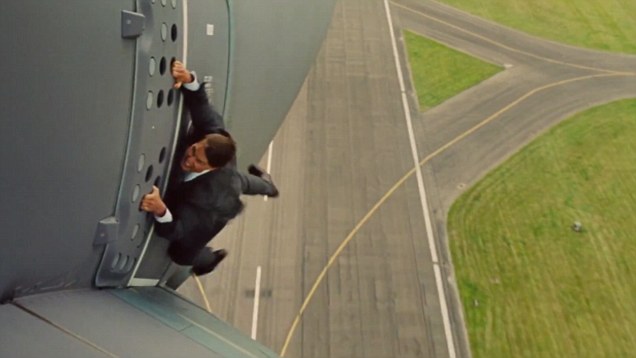 Things Got a Little out of Hand

Yes, Mission: Impossible movies should be boring by now. It’s a testament to the franchise’s vision –  and to the ceaseless energy of star Tom Cruise – that the series still feels fresh in its fifth outing. And you have to admire the franchise at this point for staying the course. In an era where uber-serious Jason Bourne and down & dirty James Bond films have dominated big-budget spy cinema, Ethan Hunt and the IMF remain true to their not-too-campy TV origins by offering big action, real drama, nifty gizmos, and twisty narratives. Most important, the films have kept their sense of humor – even after John Woo and M:I-2 (2000) almost ended the franchise.

That’s never been more true than with Rogue Nation. Sure, there’s big action. And big explosions. And high-speed chases. And plot twists galore. But there’s also a surprising amount of heart and humor at the center of this Mission: Impossible story. You can thank Writer/Director Christopher McQuarrie’s dynamic screenplay for all of those features. McQuarrie’s character-first approach to the film provides surprising emotional layers to the big-budget spectacle. That approach means ample room for even Rogue Nation‘s many side characters to make an impact. Particularly series newcomers Rebecca Ferguson as aptly named, femme fatal-ish spy Ilsa Faust and the always amazing Sean Harris as head Syndicate baddie, Lane. Of course, the whole enterprise rests squarely on the shoulder of Tom Cruise. It helps that the actor is endlessly likable as super-spy Ethan Hunt. In his fifth stint as Hunt, Cruise shifts in and out of the spy’s tricky emotional skin with little effort. McQuarrie wisely brings back regulars Pegg and Rhames, building many of Rogue Nation‘s key moments around their relationships. The stars have such natural chemistry with Cruise that watching them run scenes is akin to watching long-lost brothers sit around and tell stories. To that point, Rogue Nation often feels like a much smaller film. And that’s something special for a big-budget summer tentpole.

Still, Rogue Nation isn’t quite the best film in the series. That title still belongs to Ghost Protocol (2011). But McQuarries’ film may be the most sharply realized. And the director packs as much action into the mix as he does emotion. Though there’s nothing in Rogue Nation that matches Ghost Protocol‘s sweaty-palmed Dubai skyscraper sequence, McQuarrie shows greater care in crafting organic action sequences. The film’s massive set pieces are blended so well into McQuarrie’s story that you hardly realize they’ve started until you’re right in the middle of them. They barely even feel like set pieces. And McQuarrie has an uncanny knack for knowing exactly when to escalate the action and draw you into the mix. We caught a glimpse of that timing in McQuarrie’s underrated directorial debut, The Way of the Gun (2000) and his equally underrated follow-up, Jack Reacher (2012). But nothing can prepare you for what McQuarrie brings to his Mission: Impossible entry. It’s a savvy mix of style and substance rarely seen in summer blockbusters. And one we deserve to see more of. 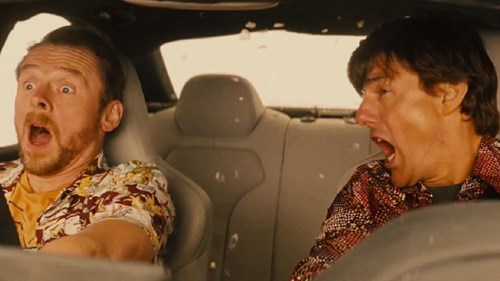 You bet. Mission Impossible: Rogue Nation was the only 2015 summer blockbuster that lived up to the season’s hype. If you skipped Rogue Nation, then there’s no better way to kick off this 2016 season. It’s big, it’s loud, it’s a little too long, and it’s often a bit silly – but damn if it isn’t tons of fun. And that’s what summer movies are all about. If you can get that and not pay summer movie prices, all the better. And you can spend some of those savings on renting Ghost Protocol again. It’s still the strongest of the Mission: Impossible films and would make a killer double-feature with Rogue Nation … and all for under $5.