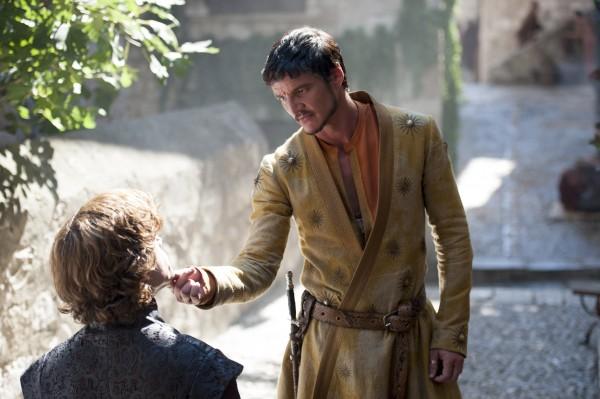 I can’t believe that season four of “Game of Thrones” is finally here. We’ve endured the winds of winter and are rewarded with the slow but steady progress of our friends from Westeros and beyond. But if there is one thing I realized as the curtain was pulled back on “Game of Thrones” 4.0 it’s that while I love the show as a whole, I hate so many of the featured characters. Obviously there is king douche, Joffrey Barath-ister, but there’s also Sansa, Theon and even the mother of dragons gets awfully whiny at times. Does that mean I’m going to stop counting down the minutes until the next episode airs? Of course not, the show is awesome! We’re in for quite the ride in the next ten weeks. Here’s our recap of the season premiere of “Game of Thrones.”

As expected, the vast number of characters being featured means there’s not room for all of them in each episode. The Bran, Theon and Stannis led storylines make way for more pressing matters this week. We’ll begin up at the Wall where our old pal Jon Snow is on trial for all of that gallivanting with Mance Rayder from last season. The group leading the trial isn’t exactly unbiased though. Ser Alliser Thorne, (the pain in the ass who led Jon and the group’s early training in season one) Ser Janos Slynt, (the old commander of the City Watch, who betrayed Ned Stark and led the massacre of potential Baratheon bastard babies before being sent to the Wall by Tyrion) and Maester Aemon (blind Targaryen and all around cool dude). Jon tells the truth about killing Qhorin Halfhand and his cave hopping session with Ygritte. But he is spared by Maester Aemon after revealing Mance Rayder’s plans. Is it just me or was Jon especially defiant and confident this episode? Maybe this is the start of a new persona for the bastard of Winterfell.

Relatively close by, Ygritte and Tormund Giantsbane sit around waiting for the king beyond the wall’s command. A group of Thenns, who are cannibals, show up and build some tension. It seems even in Westeros eating people is frowned upon. Continuing our southern descent through the continent, Arya and the Hound, a match made in sit-com heaven, are riding along. The Hound says he’s going to ransom Arya to her Aunt Lysa Arryn. Remember her from season one? She’s a weirdo. Then they come across some Lannister men, among them Polliver. They are really trying to make sure you remember the earlier seasons in this episode. Polliver was the guy who stole Arya’s sword, Needle, and killed Hot Pie’s partner in crime, Lommy Greenhands. So after a big fight where the Hound does hound-like things, Arya takes back needle and kills Polliver with the same method and words he used when killing the boy all that time ago. So did she pay back the death of her father or the events of the Red Wedding? No, but with this avenging of a minor character, we could be seeing the beginning of Arya Stark’s reign of terror.

Before we get to the treasure trove of developments in King’s Landing, Daenerys and her army are marching on the slave city of Meereen. There are a few minor events, Grey Worm might have a crush on Missandei, Daario Naharis not so subtly hits on Daenerys and the dragons are apparently going through their ‘Charizard disobeys Ash’ phase. Then the group finds a dead slave girl strung up as a mile marker pointing to Meereen. We are told there are a bunch more on the road. Dany’s angry and you won’t like Dany when she’s angry. Coming soon… Dany smash!

We’ll close things out in King’s Landing where a lot of stuff goes down. Tywin melts down the Stark family sword, Ice, and turns it into two smaller swords. He gives one to Jaime, who refuses to return to Casterly Rock in order to keep his position in the Kingsguard. But we all know he wants to stay to get all cozy with his sister, Cersei. He later confirms that. The Kingslayer is fitted with a golden hand since he was ceremoniously relieved of his real one last season. It ends up looking like a mix between Luke Skywalker and Chubbs from Happy Gilmore. Afterwards the wonder twins (Jaime and Cersei) discuss where they stand, but Cersei is mad that Jaime was gone so long. All this anger toward the once esteemed swordsman has us siding with the blonde baddy. Could Jaime Lannister be evolving into a hero?! Later Joffrey insults his uncle/secret daddy about his lack of hand and overall accomplishments. All I can say to the boy king at this point is, ‘F U Joffrey, you stink.’ Later, Brienne asks Jaime to return Sansa to the North, but Sansa is a Lannister now so I doubt that will happen. Brienne also reveals to Margaery how her old husband, Renly, died. Smoke monster!

Across town, sad little Sansa is upset about the brutal murder of her mother and brother. She is later confronted by Dontos Hollard in yet another reference to earlier in the series (season two). He gives Sansa his mother’s necklace to repay her for saving his life. You may remember he was a knight who showed up drunk to Joffrey’s name day shindig and was almost killed for it before Sansa claimed it was bad luck to kill on your name day.

Tyrion had a big episode with some big moments. After a funny few minutes with Tyrion waiting for Prince Doran Martell to show up for the royal wedding with Bronn and Podrick, it turns out the younger brother Prince Oberyn (the Red Viper) will be coming instead and he’s already in King’s Landing at a brothel. When hearing some Lannister blokes singing “The Rains of Castemere,” Mr. Viper proceeds to go and stab the guy in the wrist after some great lines. Tyrion shows up and welcomes the guest in a tense but awesome exchange. Oberyn lays out the exact reasons he hates the Lannisters. Turns out his sister was married to the Mad King’s heir Rhaegar Targaryen. The rumor is the Mountain, Gregor Clegane, under the orders of Tywin Lannister raped and murdered the sister, Elia Martell. So yeah, Oberyn is still angry about it. I can’t wait to see how this plays out.

Later on, after attempting to comfort Sansa, Shae gets all angry when Tyrion turns down her advances. Unfortunately there is a new handmaiden in town and she overhears them. Ahh it’s okay, she doesn’t know what she heard. No, it’s not okay! She goes and tells Cersei. Bummer.

So, that’s that with the “Game of Thrones” season premiere. We still have a few storylines to be introduced next week, but everything we’ve seen so far sets the stage for bigger things to come. Feel sorry for my coworkers because I’ll be humming the intro song nonstop for the next two and a half months.