The HDMI Pocket Projector: A Theater At Your Fingertips 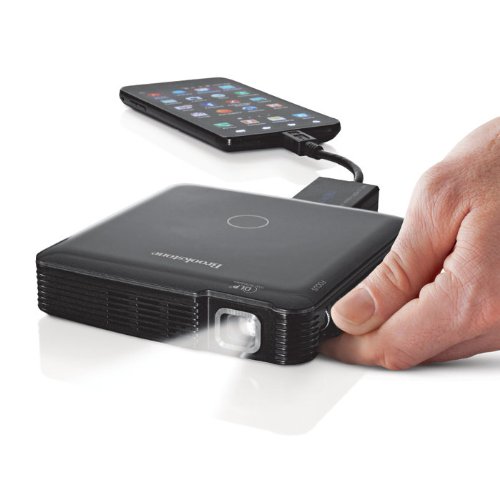 Huddling around a phone screen is not a favorable movie experience by any stretch. It is at least tolerable if you are by yourself, but nearly unbearable with a group. The same goes for computer screens. Normally you could solve this problem by gathering into the living room and watching your programming on a normal-sized television, but chances are that if you are crowded around a tiny little screen and trying to watch a movie, you are far away from another option. So, how do you combine the convenience of a mobile video with a good viewing experience and make it portable?

This portable projector weighs only half of a pound, measures at just under 4 x 4 inches and is less than an inch thick. Despite its itty-bitty frame, this device can project a bright, 85-lumen image that measures up to 80 inches diagonally and will be visible in the dark or with the lights on. The display is sharp too, as it can accept video outputs up to 1080p and 1080i. It also has a focus control dial to ensure the image is as crisp as possible.

The Pocket Projector has built-in speakers, but also has an audio output if you want to attach headphones or external speakers. With its 3800-mAh battery, you can watch up to two hours of video at the highest quality or you can use the included AC adapter. It also doubles as a USB charger for your devices.

The projector will work with any device that accepts HDMI output, including Smartphones, tablets, computers, game consoles and digital cameras. It has a variety of outputs on the back and comes with an HDMI cable, Micro HDMI adapter and a Mini HDMI adapter. Pre-warning for iPhone and iPad users: you will have to buy an Apple Digital AV adapter if you want to use this with your device.

3 Helpful Ways To Utilize Dictation Software On Your Phone