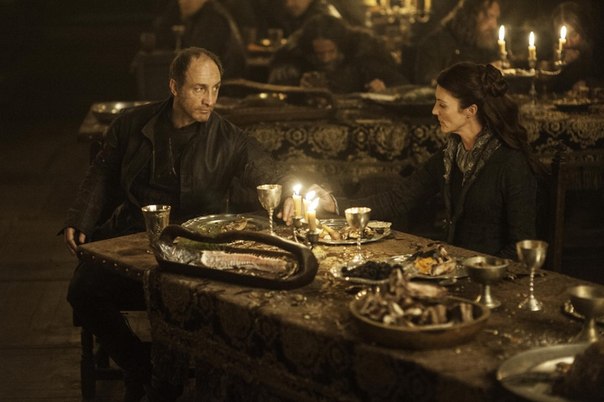 For the first time in three years of Game of Thrones, I have left an episode depressed. We learned with Ned’s death in season one that every character’s slaughter is fair game, but that doesn’t make this any easier to handle. A defenseless family betrayed at a wedding feast and a whole story arch wiped off the “Game of Thrones” landscape. Well, let’s try to make light of one of the most depressing episodes of television I’ve ever seen. When we want to make jokes, there’s naturally only one place to start.

The North and Beyond the Narrow Sea

Sam and Gilly are wandering toward the Wall and a false sense of safety. Sam continues profusely sweating and Gilly continues getting P.O.-ed because Sam isn’t uneducated and inbred like her. But Sam takes her anger as a compliment. He tells her about a secret way into one of the castles on the Wall they’re going to take. Just below said Wall, Bran and Jon’s storylines almost interact. Jon and the wildlings go to steal some horses, but Jon tries to spare the breeder’s life. The guy escapes, but the wildlings catch up to him. They want Jon to kill him to prove his loyalty. But Jon, being the beady eyed softy that he is, doesn’t want to.

It turns out Bran and company happen to be hiding in a tower right where this confrontation with the horse breeder is going down. Unfortunately Hodor gets spooked by the thunder and starts making all kinds of Hodor noise. That’s just classic Hodor. The wildlings think they hear something, but Bran somehow uses his warg powers, possesses Hodor and has him pass out. Bran then possesses Summer and Shaggy Dog, who charge in and tear out the throats of some wildlings. Jon and Ygritte survive, but before he can get killed, Jon hops on a horse and high tails it. If only he knew his brothers were there! Ygritte is left behind with Tormund, heartbroken. Say it ain’t so, Jun Snoooow. (That’s how Ygritte says it.) Bran tells Osha to take Rickon to the home of the Umbers. He and the others are going to go beyond the Wall. Would you look at that? There are other ways to ditch characters instead of killing them.

Over near Yunkai, Daenerys and her ever-growing group of advisors plan their invasion. Do we trust Daario or don’t we? I have no idea! But Daeny goes alone with his plan because Grey Worm, who has lived in captivity his whole life, trusts him. So Daario, Jorah and ol’ Wormy enter the city. They face off against multiple waves of slave soldiers. But they are apparently amazing at fighting because the three of them win. They return to Daeny and give her the good news. This group of scenes is noteworthy because we get a good amount of sword fighting, which isn’t as common as it should be on “Game of Thrones.”

The Worst Wedding Ever

Last episode we saw the awkward wedding between Tyrion and Sansa, but that is nothing compared to this. But before the wedding, Arya and The Hound approach the Twins. Arya is anxious, hoping she doesn’t miss her family. Inside the castle, Walder Frey and his daughters accept Robb’s apology for not following through on marrying one of the Frey daughters. Walder sympathizes, but is creepy ogling Talisa. So the wedding happens with noted waste of space Edmure Tully marrying the pleasantly attractive Roslin Frey. What a nice stroke of luck. You know what isn’t a nice stroke of luck? When Walder Frey and Roose Bolton betray you and murder your whole family. That’s what happens.This is a show about medieval-esque war, so it’s expected that many characters will die. But Robb’s pregnant wife, Talisa is killed by belly stabbing. That’s incredibly brutal to watch. Catelyn holds Walder’s wife by knifepoint to try and barter for the arrow ridden Robb’s release. But crusty old Walder doesn’t care. Bolton stabs Robb uttering to him, “The Lannisters send their regards.” Catelyn kills her hostage before her throat gets cut.

So let’s make sure we didn’t miss anything. The feast is going fine. The musicians start playing the “The Rains of Castemere,” a Lannister song. Ugh. Then the ambush happens. The head of House Stark, his mother and wife are murdered along with the unborn eldest child. Of course earlier in the scene Robb and Talisa decided the kid would be named Eddard. So that seems to be a cursed name. Now for the kicker. Arya was right at the gates so close to her mother and brother. But she will never see them again. She does however get to see men kill Grey Wind, Robb’s wolf. So there’s that. The Hound knocks out Arya and takes her away to save her from the onslaught. I wonder if Grey Wind and Grey Worm are related. They probably are.

Do we want to take a tally to show how brutal George RR Martin is toward the first family of “Game of Thrones?” Ned got beheaded. His brother Benjen is missing. The soldiers from Pyke burnt down Winterfell and murdered all of the people there. The Stark banner-men have been fighting in a war, so that killed tons of them. Robb gets stabbed to death. Catelyn’s throat is slit. Talisa and her unborn baby stabbed. Robb and Sansa’s wolves are dead too. What a terrible run. Sansa, Arya, Bran and Rickon are left. Oh and then there’s Jon Snow. I think he’ll probably be mad when he hears about this.

So consider me thoroughly depressed. The ninth episode of each season has proven to be the point of most chaos on Game of Thrones. I can only hope that episode ten gives us some kind of hope or resolution before we have to wait another year for the show to return. As long as we don’t spend a ton of time on Sam or Theon, I’ll be ready for this season’s final Game of Thrones.