‘Game of Thrones’ S8 E4 Recap: The Pain That Was Promised 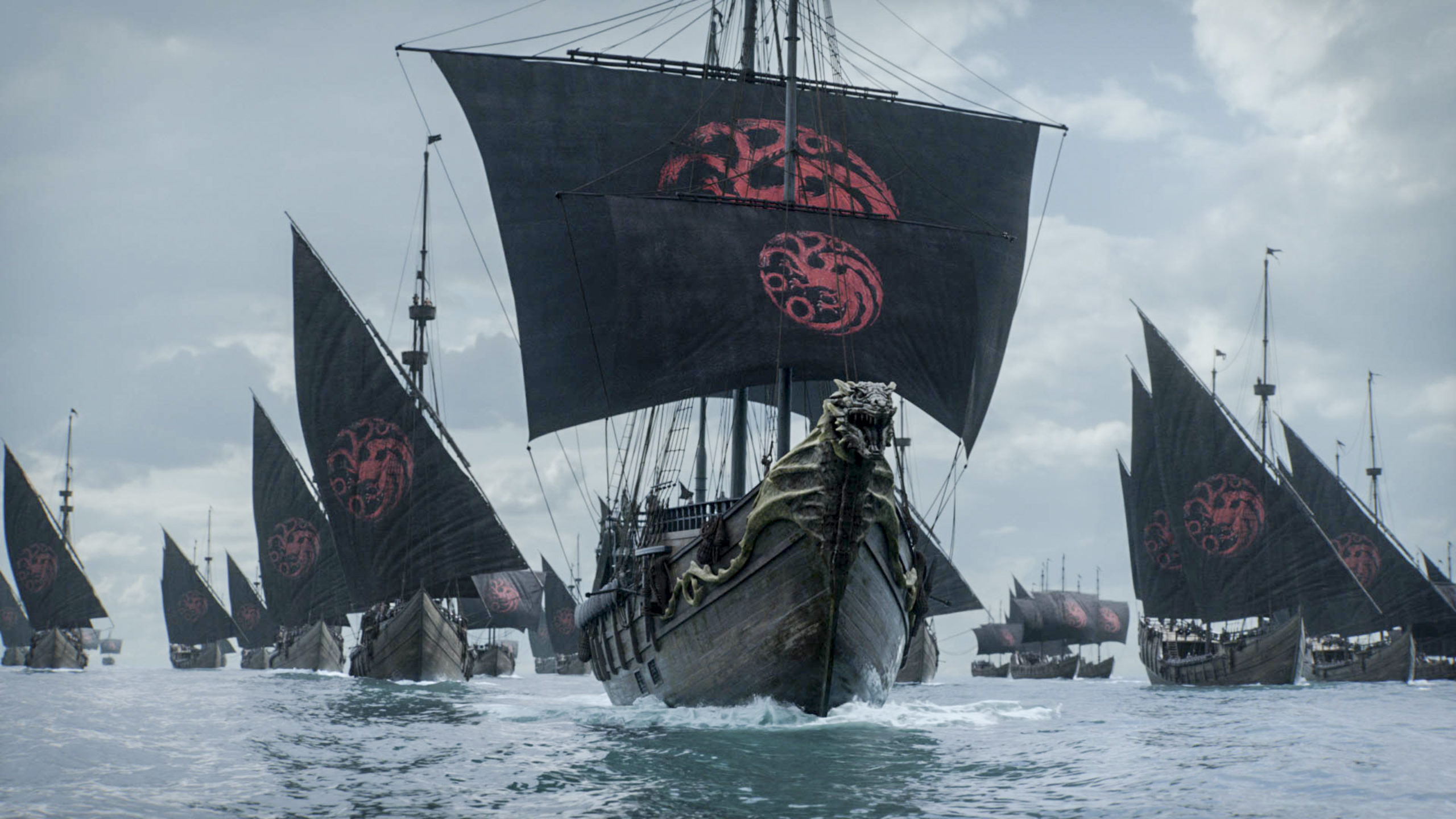 And here I was thinking the brutality of last week’s episode would lead to some type of win for the audience as we enter the second half of the final season. I guess we have to remember that this is Game of Thrones after all. After a fun little feast, things go wrong and then they go really, really wrong. Here’s our recap for “The Last of the Starks”

The characters we knew who died during the supposed “Great War” last episode get a nice sendoff among a mass of funeral pyres. No word on what happened to the countless zombie corpses. Maybe they deteriorated really fast after the Night King died. They’re like avocados. You have to use them quickly. Daenerys kisses Jorah and Sansa gives Theon a pin with the Stark sigil on it. I think she bought it for him at the HBO store. Jon gives a bit of a eulogy to the survivors explaining their sacrifice. It sounds pretty similar to the Night’s Watch send-off. What most fans would care about in this scene however is the reappearance of Ghost, our trusty but often absentee direwolf. He’s alive, but with his fair share of wounds.

The victory feast in the Great Hall at Winterfell is a bit of a glum affair to start. Dany livens things up by naming Gendry, Lord Gendry Baratheon, Lord of Storm’s End. One of the few major castles in Westeros we haven’t seen on the show, I’m sure all those Baratheon bannerman will appreciate this young dude they’ve never met showing up saying he’s lord because a queen, who doesn’t sit on the throne told him so. Presumably someone is ruling there now, Daenerys. Gendry humbly accepts and is showered with applause. His first act as lord is to propose to Arya. She replies, “Aww hell nah” and that’s that.

The rest of the feast is a regular old hootenanny as the writers try to get our guard down before smacking us across the face. Tormund makes the rounds. First he praises Jon for riding the dragon, which makes Daenerys super jealous. He then tries to approach Brienne again. Unfortunately, the fifth time wasn’t the charm. He also says something about soiling himself. So it was all Tormund being Tormund. The Hound has his long-awaited reunion with Sansa. He tells her he would have kept her safe had she left King’s Landing with him way back at the end of season two. But she points out that she would still be a “little bird” if she hadn’t experienced what she had.

Daenerys visits Jon’s room, but this meeting goes differently than Brienne and Jaime. Dany pleads with Jon to keep his Targaryen lineage secret. But as we’ve seen, Jon is suffering from Pinocchio syndrome and is more afraid of telling a lie than he was of the White Walkers. He assures her he doesn’t want to be king. But since he’s male and technically has a better claim, she doesn’t think it would matter what he wants.

All the big wigs meet up for a council meeting to discuss the plans for attacking King’s Landing. At least half of the forces were killed in the battle. But we also learn the Dorne has pledged their support for Daenerys. Cool, Dorne. Where the hell have you been? Also, Yara has retaken the Iron Islands. Sansa balks at Daenerys’ plan claiming the people in the North are tired. Really Sansa that’s the best excuse you could come up with? That’s the “dog ate my homework” of get out of war excuses. Jon assures Daenerys they will join her. Dany and her peeps are going to go to Dragonstone. Jon and the rest are going to walk south like losers.

After the meeting, Arya, Bran, and Sansa want to talk to Jon. They think it would be a mistake to go south. Historically, it ends very badly for Starks when they go south. If you recall, Ned, Ned’s father, and his brother were all killed in King’s Landing. Jon decides to tell Arya and Sansa about his parentage. Why, because he’s apparently really stupid. But it’s ok because he presumably made them pinky promise and swear on Ned’s recently reanimated corpse. Sansa immediately turns around and tells Tyrion a few scenes later. It seems the secret keeping ability Ned showed over the 20+ years when he didn’t even tell his loving wife Jon’s deal, doesn’t run in the family. Tyrion was just trying to get Sansa on board with Daenerys’ rule. What he got was lots of potential trouble.

Before everyone heads out, Jaime gets a drink with Tyrion. Jaime is going to stay with Brienne at Winterfell. Everyone’s old pal, Bronn, shows up. He unsurprisingly has come to search for a counter deal to the one Cersei offered him. Riverrun to kill Jaime and Tyrion. Tyrion offers Bronn Highgarden to not kill them. He accepts and tells them he’ll find them if they win the war. Why is Bronn all of a sudden mad at Jaime and Tyrion. They’re your bros, bro!

The Hound and Arya meet up riding away from the castle. Both are heading to King’s Landing and they’re riding companions once more. Jon bids farewell to his northern friends. Tormund is heading back to the far north past the Wall. Jon asks him to take Ghost with him. Apparently the budget for Ghost is far worse than we thought. He’s had less screen time this season than Maester Christopher Wolken. (I don’t actually know his first name. But that works.) Jon also says farewell to Sam and Gilly, who are pregnant! She reveals that they plan to name the baby Jon if it’s a boy. How about Edd if it’s a girl? The image of them all standing there as Jon rides off makes it seem like he may be saying goodbye to the North for good.

On the ships heading to Dragonstone, Tyrion tells Varys about the new Aegon Targaryen. They have no idea what to do about it. They talk more later, but first let’s give Game of Thrones a chance to make us feel really sad on this Sunday night. Daenerys is flying on Drogon as the injured Rhaegal seems to be getting back up to speed. Nope, he gets shot by a bunch of scorpion bolts and dies brutally. Euron and the Iron Fleet have a whole bunch of the giant crossbows now. Somehow, the whole armada is hiding behind a rock and nobody saw them. I can believe a show with dragons, giants and demons, but I cannot believe no one saw these ships coming.

They turn the weapons on the Targaryen ships as our people have to jump in the water to survive. A few moments after holding hands in a touching gesture, Grey Worm and Missandei are separated. Euron captures her off-screen and takes her hostage. (Note* I misspelled Grey Worm above as Gary Worm in my first draft and now I want to exclusively refer to him that way.) In the aftermath of the attack, Varys and Tyrion discuss their continually weakening odds. Varys even mentions that he considers Jon as a potentially stronger option at this point. Tyrion stands by Daenerys. Did Varys just imply he might kill Daenerys? What an unfulfilling waste of eight season for the dragon queen that end would be.

When the news reaches Winterfell of the attack, Sansa is frustratingly smug about it. Why is Sansa being presented as such a jerk? Jaime responds by packing up in the night to ride south. Brienne tries to convince him to stay, but he lists off all of the rotten things he has done in Cersei’s name. It’s a bit unclear whether his intentions with Cersei lean toward reconciliation or assassination. But he left Brienne crying in the courtyard and that ain’t cool. 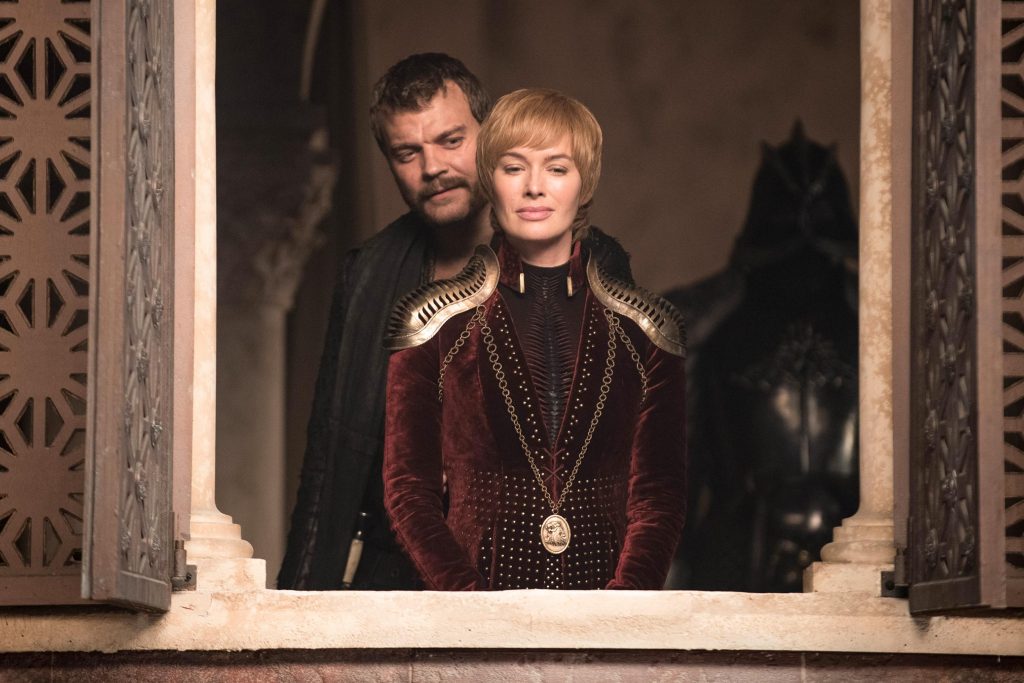 ‘Game of Thrones’- “The Last of the Starks” (Source: HBO)

After all the scorpions, Cersei’s next defensive strategy is to fill the Red Keep with lowly common folk. So if Targaryen forces try to take the castle, they’ll have to kill tons of innocents. She also leads Euron to believe her baby is his. They’ll know it’s not true when the baby is born without leather pants or guyliner.

Tyrion and Varys convince a livid Daenerys to give Cersei the chance to surrender and keep her life in exchange for the Iron Throne. A small force march on King’s Landing to offer these terms. Tyrion and Qyburn speak, but get nowhere. Both sides want a surrender immediately. The only problem here is that Cersei says she will kill Missandei unless Dany surrenders. There’s also the fact that Cersei could easily kill Dany, Tyrion, and Drogon in this scene, but she inexplicably doesn’t. We know she’s not fighting fair. So why does she here? Tyrion walks right past Qyburn and addresses Cersei directly up on the wall. He says her reign has ended, but for her child’s sake she needs to surrender. Her response is to ask Missandei if she has any last words.

The Mountain cuts Missandei’s head off as her body falls to the ground. Gary Worm looks away just before it happens. This was his only fear. Poor Missandei. She had just been talking about wanting to go home to Naath. They have beaches there. She just wanted to go to the beach! Maybe play volleyball. Go boogieboarding. But Cersei took it all away. Her final word translates to “dragonfire.” We’re getting dangerously close to Daenerys using her father, the Mad King’s, favorite command. “Burn them all.”

Honestly at this point, I would take Dany going a bit crazy if it meant we get a win. My money is on a brutal fight where all the good guys die. Then last second as Cersei is going to kill Daenerys, Arya jumps out of a tree with a knife. Fade to black. It worked last time. We’ll see next week how the very pissed Dany will respond.

Eve Takes a Huge Risk on an Almost-Lethal ‘Killing Eve’

What’s the Difference Between Geeks and Nerds?