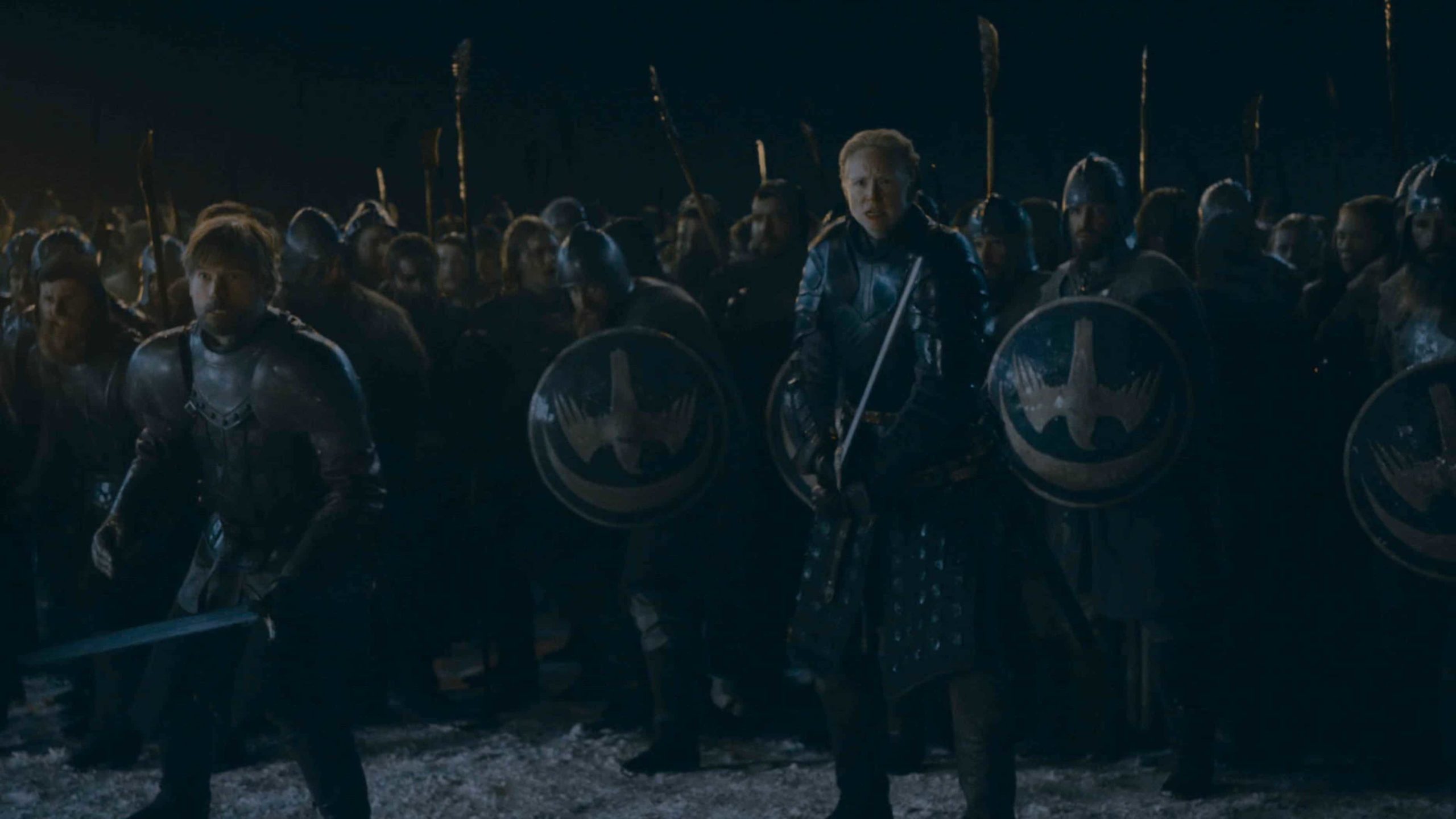 It’s the battle we’ve all been waiting for. The White Walkers have arrived at Winterfell and our Game of Thrones stress is at an all-time high. If you’re anything like me, you ended the 80+ minute episode with a pit in your stomach and a lump in your throat. The Battle of Winterfell hit me right in the feels. I only have one question after watching this series-defining episode. Dear Game of Thrones writers, who hurt you? Here’s our recap of “The Long Night.”

Ultimately this entire episode could be summed up by saying that our heroes get whooped on and then pull off a buzzer beater. But we have to get more specific than that. We begin around the castle as everyone gets ready for imminent death. The music builds the tension as we are shown every character we care about in a way that leads us to believe they are going to die. Melisandre rolls up just before things are about to go down. How she conveniently weaved her way between the army of the dead we’ll never know. She gets our hopes up by igniting all the Dothraki swords with her Lord of Light voodoo. Maybe we do stand a chance!

Their charge is short-lived as we see from afar their lights extinguished one by one. Have we mentioned how inconveniently dark this fight is? They collide with the bad guys led by a bunch of zombie giants. Just like that, the Dothraki forces are extinct and one of Daenerys’ armies is gone. Jorah, who was commanding that group makes it back. The undead then charge the other defenses like ants climbing on top of each other and overrunning anything in their way. It’s not even a competition. We see the Knights of the Vale, Wildlings, Unsullied, and many of our characters completely decimated. Edd saves Sam before being stabbed in the back and taken down. And now his watch has ended.

Daenerys and Jon are on the outskirts waiting for the Night King to show himself. However, Dany saw what she led the Dothraki into and decides she needs to contribute. She burns tons of wights and definitely prevents this from being a very short “battle.” Those good guys left alive retreat back to the castle. It’s foggy, messy, and it seems like every character we don’t know is already dead. Yet the big names appear to still be kicking. Grey Worm defends the retreat with the Unsullied, who lose tons of men. The plan was to have one of the dragons ignite a trench around the castle to keep out the wights. But the Walkers called in fog like they’re storm from X-Men, so the dragons can’t see the command. Grey Worm calls over Melisandre, who uses her voodoo one more time and sparks it.

Meanwhile, Arya sends Sansa to safety in the crypt with a knife. “Stick ‘em with the pointy end” she tells her. When she arrives, there are a lot of scared people. But Tyrion is more anxious than scared. He thinks he could be of some use. Probably not. Unless he can breathe fire like a dragon, he wouldn’t help. He and Sansa chat a bit about their abbreviated marriage. Sansa admits he was the best of her husbands. Well seeing that she was betrothed to Joffrey and married to Ramsay, yes Tyrion was the best of them. That’s like saying this cheeseburger is way tastier than garbage.

The fire trench gives everyone a chance to catch their breath. But it only takes a minute for the wights to make a body bridge by sacrificing a few of their numbers to allow the rest to cross unburnt. They scale the walls like it’s Black Friday at Walmart and easily enter Winterfell. A zombie giant breaks through the front gate and swats away the Bear Island badass, Lyanna Mormont. The giant then picks her up to crush her and/or get a closer look. That was a mistake. She stabs him right in the eye before falling to the ground, dead.

Arya has an exciting night beginning with some very stylish slayings. Like everyone, she quickly takes a beating. Falling back within her castle’s walls, the home-field advantage isn’t much help. After sneaking around for a while, a whole horde comes after her. The Hound and Beric are there to help. Beric takes on many wounds after sacrificing his flaming sword. They retreat into the great hall and he succumbs to his injuries. Melisandre is in there just hanging out. Maybe that’s where the coffee machine is. She tells Arya the Lord of Light brought Beric back all those times for this moment. Saving Arya was his purpose. Also they recall what Melisandre said years ago about shutting eyes of different colors forever. Blue eyes you say??

Up on the dragons, Jon and Dany accidentally crash into each other because of the fog. They’re looking for the Night King. Eventually they find him, but he seems to have mastered this dragon riding thing very quickly. The fact that Daenerys has the biggest dragon and it’s 2 vs. 1 doesn’t seem to have much of an impact. Eventually Drogon (good dragon) chomps Viserion (bad dragon). Jon gets tossed from Rhaegal, who crashes into the ground. We don’t see that particular dragon again. He may be dead. Maybe not.

The Night King was also tossed from his dragon. Daenerys attempts to “dracarys” him. Doesn’t work. But she keeps staring him down. This is the portion of the episode where my wife and are shouting at the TV. “Watch out for his javelin!” He eventually does toss his dragon slaying ice spear at Drogon, but Dany pulls up and avoids him. Jon spots his nemesis and makes a charge at him. This is it. The one on one showdown between Jon and the Night King that’s been teased across multiple seasons. Actually no. The Night King wimps out. He presses the respawn button and reanimates all the dead people.

We go around the castle to see the dead stand back up among the exhausted expressions of all our heroes. Tormund, Jaime, Brienne, Gendry… Pick a person, they’re exhausted and annoyed. I’ve personally never been in an exhausting sword fight like this, but I just about had a heart attack any time a character paused to look around. Don’t they know that’s when they get you? Edd, Lyanna, and the Dothraki are among the zombies now. Down in the crypt, the dead Starks of yesteryear emerge from their final resting places to attack the women, children and elderly (plus Tyrion and Varys).

Daenerys and Drogon save Jon as he’s about to be killed. From there, he announces he has to get to Bran in the Godswood. While Daenerys sits and stares off again, the wights climb all over Drogon. He takes off quickly to escape them and throws his rider. We haven’t seen Daenerys do much hand to hand combat, but she’s going to have to now. Jorah appears to help his queen. He fights heroically as you would expect. Ultimately Ser Jorah Mormont, one of our original characters since way back in season one gets stabbed one too many times and dies in Daenerys’ arms.

In the Godswood, Theon and his small band of Ironborn have been defending Bran. After seeing how the rest of the episode has gone, it should be no surprise that the army of the dead have no trouble outnumbering and murdering them. All this time, Bran has warged into some ravens and is basically watching this episode along with all of us. Get a bow and arrow or something Bran. You’re not helping. Theon is the last line of defense when the White Walkers march in.

Bran tells Theon he’s “a good man.” With that, Ned Stark’s former ward has come full circle. He’s been accepted as both a Greyjoy and a Stark. He fought valiantly and takes one charge at the Night King knowing full well he’s not going to kill him. The Night King dodges the thrust and impales Theon with the spear. He dies in the snow. Another original character gone just like that. What a crazy eight seasons it was for Theon. But we’ll have time to reminisce later. The Night King is (slowly) approaching Bran.

Jon is trapped in the courtyard by the ice dragon while attempting to get to Bran. Dany is out with Jorah, our various knights and warriors are in the courtyard. This is it. The Night King and Bran stare at each other. Are they going to talk? Nope. It’s Arya FROM DOWNTOWN. Emerging over the Night King’s shoulder with a war cry and a Valyrian steel dagger, Arya freakin’ Stark makes her move. The Night King grabs her by the throat. She drops the dagger, grabs it with her other hand and stabs the Night King in the gut. He shatters into a million pieces. The other White Walkers shatter, the army falls, and it’s done.

Now how exactly did she leap over all those Walkers and zombies without being stopped? I don’t know. Maybe she jumped out of a window or from a tree. It doesn’t matter. She did it! How tiring was this fight? We get a shot of the Hound looking like he’s going to hurl. So I guess it was tiring.

As the sun rises both literally and figuratively, Melisandre wanders out into the snow. She discards her magical necklace and turns all grey and wrinkly before disintegrating like Thanos just turned up. Her work here is done. And so is mine. We got virtually no post-fight resolution. That’s presumably what next week is for. Hopefully my blood pressure will go down by then.