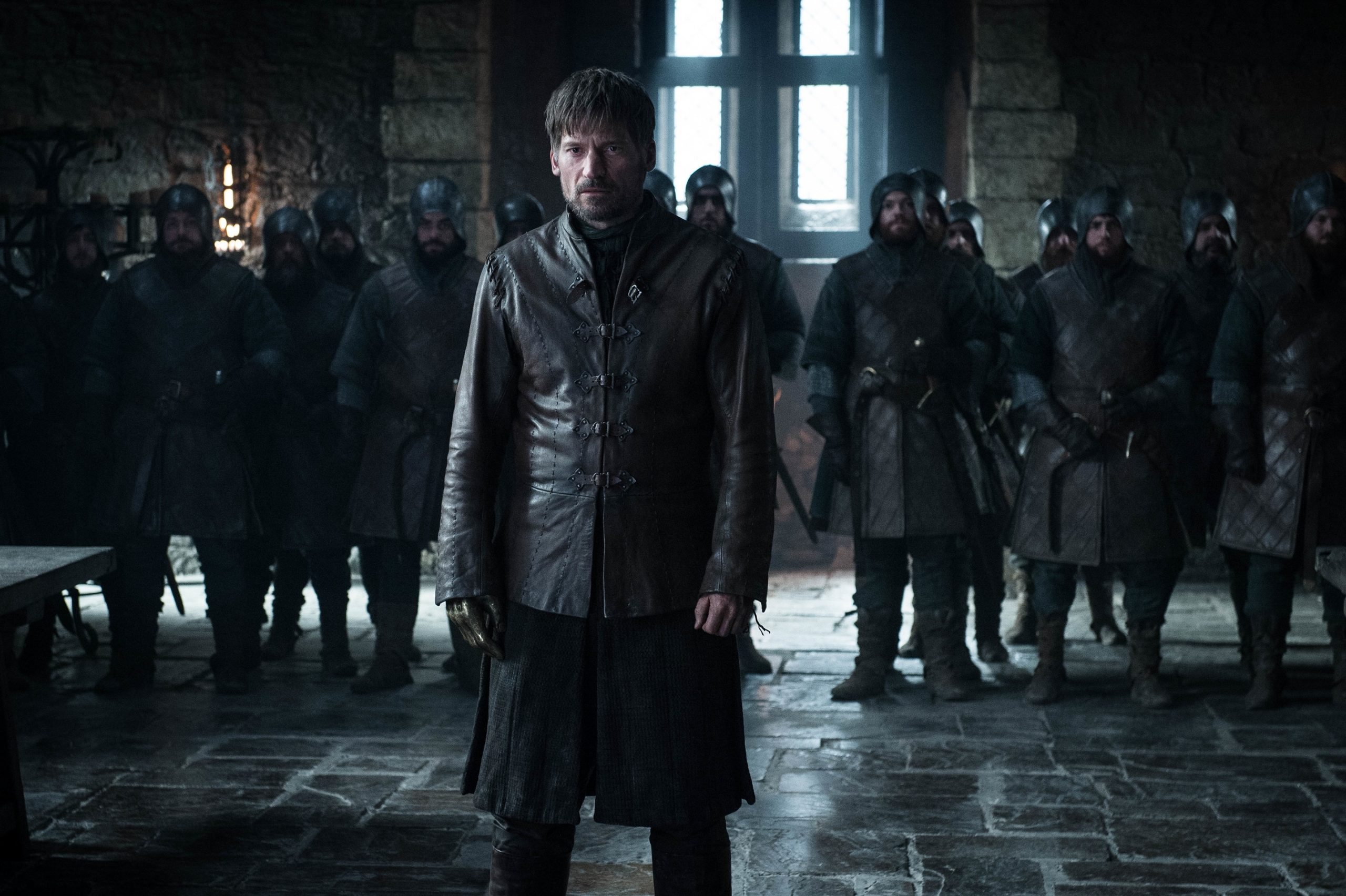 We get one more episode of “Full House: Westeros” before the abominable snowmen tear down all of our hopes and dreams next week in the battle at Winterfell. But the last day and night before the big fight provided plenty of proverbial goats for us to sink our dragon teeth into. Gend-rya happened, Jon spilled the beans to Daenerys, and possibly the most fun scene in the entire run of Game of Thrones played out next to the fire. Here’s our recap of “A Knight of the Seven Kingdoms.”

The staring contest between Jaime and Bran that wrapped up last week’s premiere brings us to our opening scene this week in the great hall of Winterfell. Jaime is being grilled by Daenerys and Sansa. Mostly it’s related to his stabbing Daenerys’ pops back in the day and Cersei lying about sending help to the North. The Kingslayer takes it all in stride until Bran utters, “The things we do for love.” Mic drop. Remember Jaime said that before pushing Bran out that window years ago. Tyrion’s attempts to vouch for his brother don’t help much. However Brienne’s word does carry some weight. Sansa accepts Jaime’s help and Daenerys reluctantly does too.

Jaime covers some ground during the episode and talks to a lot of people. He attempts to apologize to Bran. But Bran is busy staring at a tree and talks in riddles like usual. Jaime then chats for a bit with Tyrion before pledging his sword to fight under Brienne’s command in the battle. More on them later.

Meanwhile Arya is making the rounds too. She has another abbreviated chat with the Hound, but she’s set her eyes on another supporting character. It’s the sweatiest man in Winterfell, Gendry. I’m no battle expert, but maybe the dude shouldn’t be swinging that smithing hammer so much the day before this epic battle. He’s going to be so sore. I power washed my house last week. Still sore. It’s basically the same thing. Anyway, back to Game of Thrones. Arya and Gendry get busy. Character ages are so murky on this show I don’t know if this is a normal romance or a creepy one. But let’s just wish them well and move along. Gendry made Arya a weapon with Dragonglass too. How romantic.

Daenerys is really looking more and more like a fish out of water at Winterfell. Jon spends much of the episode avoiding his lady friend as he’s not quite sure how to break the news that they’re related and maybe he should be king. She tries to nip the Sansa feud in the bud by paying her a visit. It goes pretty well until Sansa says the North won’t bow to Daenerys after this war with the Walkers. Daenerys also chats with Jorah in a much friendlier exchange. He defends Tyrion’s intelligence even though Daenerys reveals she would have named him Hand of the Queen if he wasn’t off fighting Greyscale at the time.

We witness a short scene between Mormonts for the first time as Jorah attempts to convince his cousin Lyanna to sit out the fighting. He is not successful. Sam decides to gift Heartsbane, the Tarly family sword to a more formidable warrior, Ser Jorah, for the battle. For those keeping track of the ancient Valyrian steel sword roulette that continues to spin, here’s an update. What would be Jon’s sword, which belonged to House Stark, was melted down by Tywin Lannister. Jaime and Brienne now have swords made from that Valyrian Steel. Jon now holds what was the Mormont family sword. Jorah Mormont has the Tarly sword. Pokemon card rules apply. No trade backs.

Edd, Tormund, and Beric arrive safely at Winterfell after their scare at Last Hearth. We get a fun call back to so many Night’s Watch scenes with Jon, Sam, and Edd on the ramparts, much like their time on top of the Wall at Castle Black. Also sorry to bury the lead, but GHOST IS BACK. Where in the seven hells has he been? And now he’s just here. I guess he came down from Castle Black with the Night’s Watch. But still. We were worried. 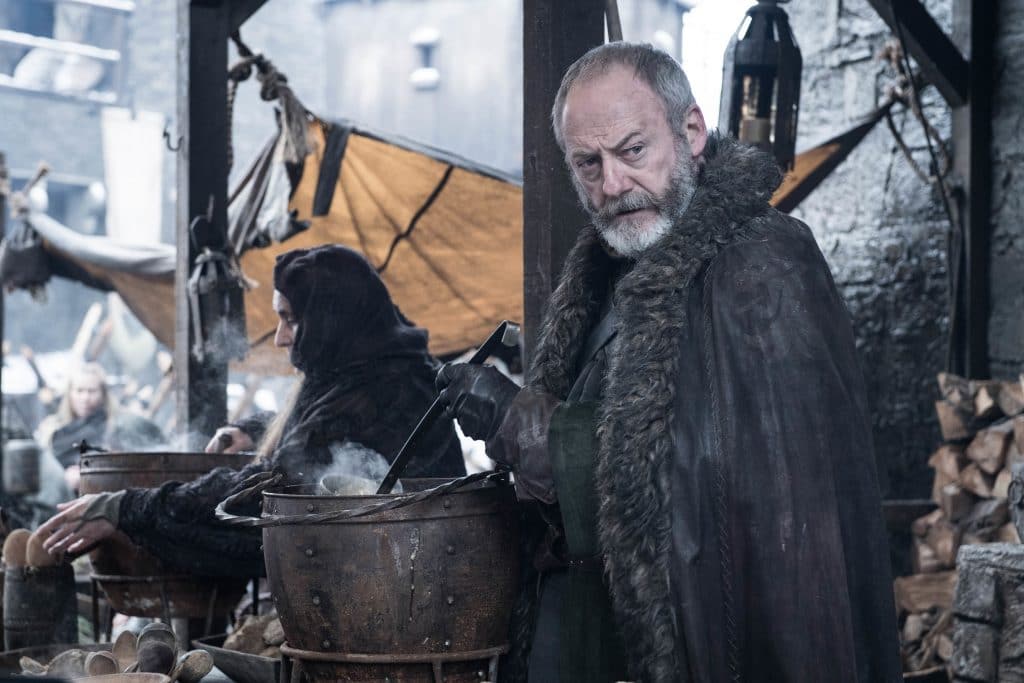 ‘Game of Thrones’- “A Knight of the Seven Kingdoms” (Source: HBO)

Every pre-battle scene you would want, need, or roll your eyes at plays out in the episode. There are the smallfolk complaining they are not soldiers. Grey Worm and Missandei plan to run away together to Naath after the war is won. Then Podrick sings a song. It’s all here.

Many of our main players gather for one final strategy sesh. It’s not an overly optimistic presentation. Bran says that the Night King will come for him. He’s always tried to kill the Three-Eyed Raven. The strategists agree killing the Night King may destroy the entire army. So Bran will bait the enemy. Theon vows to protect him. Great, we’re all saved. Thank you, Theon, noble warrior. The strategy to kill the Night King rests on the hope that dragon fire will melt him and his Iron Maiden costume.

With the arrival of the White Walkers looming, Jaime and Tyrion are drinking by the fire. Soon half the cast joins them attempting to escape the cold. Brienne, Podrick, Davos, and the absurd (yet hilarious) human that is Tormund Giantsbane. While most of the fireside chat is just fan service or character building, it’s fun to watch. Tyrion returns to one of his favorite pastimes, getting Pod drunk. He also points out some of the various battles they had all fought in and survived. Then there’s the irony of this particular group defending the Starks, once a common enemy.

Tormund lays it on thick attempting to woo Brienne. He tells the story of how he killed a giant and then was breastfed by one. Alas there’s not too much progress with that would be romance. When Tormund is surprised to learn Brienne isn’t a knight, Jaime decides to remedy that. Any knight can make a knight. He unsheathes his sword and dubs her Ser Brienne of Tarth. She has tears in her eyes as Tormund applauds.

After getting the cold shoulder from Jon, Daenerys tracks him down in the crypts by Lyanna Stark’s statue. She’s uneasy as she brings up her brother Rhaegar’s supposed rape of Lyanna. But Jon interrupts her to clear the air. Rhaegar didn’t rape Lyanna. They were in love, secretly married and oh by the way, Jon is their son. Daenerys questions this intel since Jon’s brother and his BFF are the ones who told him about it. Can we just say before you flip out Dany, Jon hasn’t said he wants to be King of the Seven Kingdoms or any of that. So maybe chill a bit. The whole incest deal doesn’t seem to have bothered them at all. That’s Westeros for you.

They’re interrupted by the horn sounding the arrival of the White Walkers. Jon, Dany, and Tyrion look out over the frozen land before marching off to prepare for battle. Not too far off, a long line of mounted White Walkers stares ominously at the lights of Winterfell. It’s the next stop on their castle smashing tour. Usually we only see a handful of White Walkers leading the army of the dead. But this is a row as far as the eye can see. We’re going to need a bigger castle. Next week, battle!