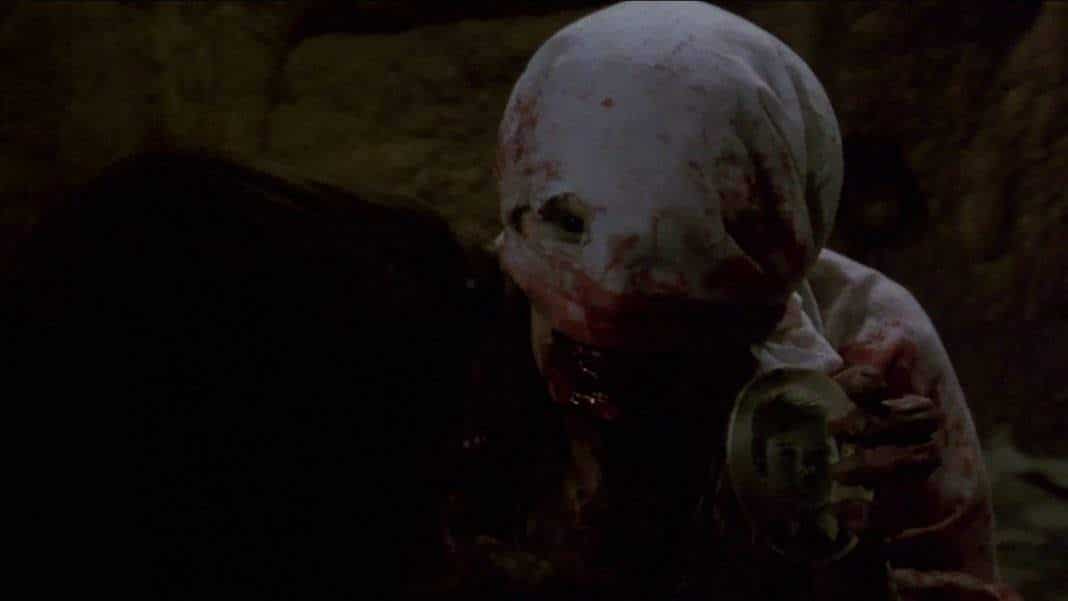 I re-learned a few things this week, of varying degrees of utility and relevance. Paramount, perhaps, in my re-education, is the fact that a holiday weekend donks up my schedule to high heaven, so unfortunately, my greatly anticipated viewing of Castle Freak got wildly eclipsed by Fourth of July merriment (if you guessed that I am the sort of girl who hates jingoism but loves day drinking, pat that back, you’re paying attention) and the inaugural viewing of what promises to be far too many watches of Midsommar. But now we’ve done it. We’ve got our figurative ducks in a literal row, and they are quacking with the gusto of the righteous, because the second lesson I revisited this week is: a thing doesn’t have to be good to be enjoyable.

And that’s the biggest twist of Castle Freak – it actually is enjoyable! It’s not as over the top campy as I had anticipated and, let’s be fully transparent here, actually hoped. Had it been several more steps to the subtle, it would have channeled a very specific vein of Edgar Allen Poe, but that was not quite the neighborhood we were visiting. But there were more gothic undertones than one might anticipate from a movie called Castle Freak – which immediately summons simply the notion of shock value.

The nutshell study goes thus: an American family inherits a castle in Italy after the Duchess who had lived there in solitude dies. The family consists of a recovered alcoholic father, a bitter mother and a blind daughter. As the family settles in, they begin to be aware that, oh hello, this castle isn’t as abandoned as originally advertised. Our titular Castle Freak breaks free from his change and wreaks a little havoc.

Much of this was pretty clearly represented in the trailer, where your intrepid narrator went off book, and alas, it seems, a little off the rails, was filling out the spaces between. Previously on, I suggested that CF would fall in love with the daughter and have a real Quasimodo/the Beast sort of scenario. And look, there’s certainly some suggestion that he’s at least a tiny bit horny for her. But it’s not the thrust of the story. In fact, CF doesn’t factor in as directly as I anticipated. Structurally, it’s a huge mistake for the movie to reveal to us so soon – nigh on immediately – that CF is an actual entity, living in the castle.

The movie feints towards being a mystery, and could be a pretty serviceable one at that -when a local prostitute goes missing at the castle and eventually the housekeeper as well, the authorities suspect the pater familias, and with solid reason. He’s wracked with guilt over a drunk driving incident – one which we learn caused his daughter’s blindness but also killed his son. He falls off the wagon pretty hard and his relationship with his wife can best be described as tense-to-frigid, and that, generously. An unreliable narrator declaring his innocence to the absolute and complete disbelief of everyone around him should have been the central mystery. And honestly, that would have been a better story than my Beauty and the Beast idea! I’d have been there for that. But by establishing immediately that CF is there and real, the movie robs itself of its greatest potential source of dramatic tension, and instead tries to make a narrative out of the why. But here’s the thing. No one really cares why. He’s been locked in a dungeon for years. Having the father investigate and try to learn more about the castle and it’s inhabitants could have been fun, but it’s all pretty hamfisted here.

Because, in a ridiculous twist that does, slightly, harken back to one of my other predictions, it turns out that CF and pops are connected. I had speculated that pops would resemble CF’s father, and spur him to acts of revenge. Instead, and might I add, incredibly stupidly, it turns out that CF and pops are half brothers, and that their shared mother had faked CF’s death when he was a child so that she could lock him in a dungeon and beat the snot out of him to punish him as revenge on his father who left her. I think? It’s frankly pretty convoluted and non-sensical. I’m counting it as a half win, though. I didn’t see their exact connection coming, because I am sane, but I was right that there would turn out to be some sort of bond between them.

It may sound like I’m talking a lot of shit on Castle Freak – make no mistake, I am! It’s not a good movie! But to return to my earlier thesis, good does not always equate enjoyable. And you know what? I kind of had fun watching this turd of a movie! It’s not going to win any awards, but it was well paced, it was pretty gnarly (and let’s be honest, if you’re watching a movie called Castle Freak it’s not because you expect a Terrence Malick film). It’s not a bad way to pass an hour and a half, because oh right, by the way, it’s also short, so all of the wins, hot dog.

Next time, I’m going to try for something that – based solely on the cover – looks like it’s a bit more up my alley. Join me when I make wild assumptions based on the trailer for Apostle!

Proof of the Mandela Effect?