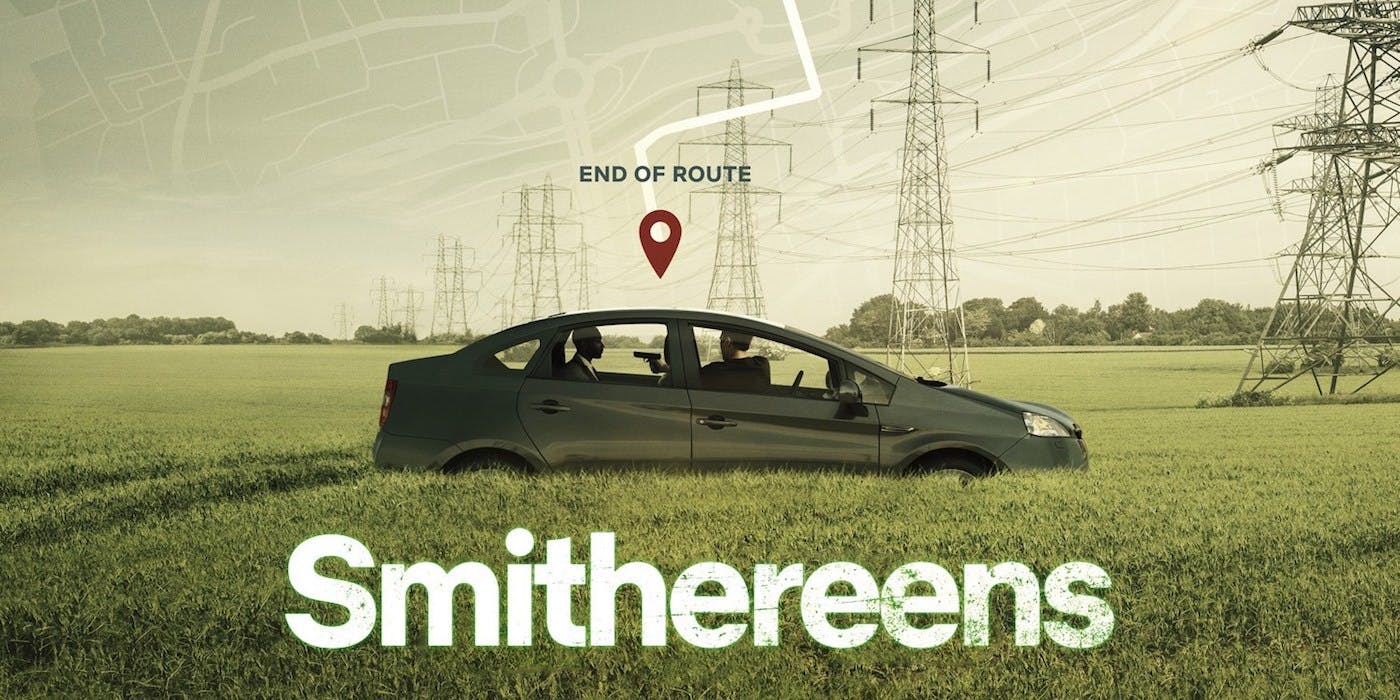 Be warned: spoilers ahead.

Consisting of only three episodes, the fifth season of Black Mirror became available on Netflix on June 5. The second episode of this latest season is called Smithereens. Although not the only one of this particular kind, Smithereens is an atypical Black Mirror episode because, in it, the premise in play does not imply a fictional extrapolation of modern technology to something that isn’t here quite yet.

The drama playing out in Smithereens is technologically plausible today. But even the earlier episodes that resorted to similarly plausible scenarios, in one way or another, played with exaggerations or exacerbations that elevated potential side effects of technology use to improbable plots. That isn’t the case with Smithereens.

Either way, the writing is so good that the concepts at stake in Black Mirror are always worth reflecting upon. That tension between hominid and technology, between soul and automation, when well done, is always compelling. And Black Mirror, for the most part, does it exquisitely well.

One thing that makes Smithereens stand out is a startling the future is already here vibe. But while the future may already be here, it is not clear whether we’re already there body and soul. Although things are changing fast, our fundamental make-up is ancient, and often at odds with how impersonal technology has become. And we’re often too immersed in our daily lives to consciously adapt to the immediacy of the game being played. We’ve hit the ground running.

Today’s world is one of vertiginous acceleration, in which the tribal human seems to be disappearing into a quicksand of smartphone interconnectivity. Technological and scientific advances can be found all throughout history. The paradigm shifts are numerous: the taming of fire, the invention of the wheel, the advent of agriculture, the arrival of the printing press, the industrial revolution. But this is different. Nothing in our past prepared us for how fast and how prolifically information is now circulating.

That’s already here. And it comes with pros and cons. But, when you stop to think about it, you can get vertigo just from contemplating how surreal the new normal is. Black Mirror’s episode Smithereens illustrates this in a groping-for-terra–firma kind of way, by telling a story of souls trying to find their footing in this new sea of algorithms.

Of these souls, the main one is Chris Gillhaney, a rideshare driver played by Andrew Scott (Fleabag, Sherlock). It’s 2018 and we’re in London. Chris works for the app Hitcher, and everyday he parks his car close to the London offices of global social media company Smithereen, in hopes of picking up an important employee from that company. After what is presumed to be several attempts, he kind of succeeds.

One day, Chris manages to pick up Jaden, an intern at Smithereen, played by Damson Idris (Snowfall). Jaden’s attire and demeanor lead Chris to wrongly presume he has status within the company, and what was supposed to be a ride to the airport turns into an abduction at gunpoint. Chris’ ultimate intentions are still unexplained at this point of the episode, but it is clear that he’s looking for some type of leverage against Smithereen. However, his plan starts to go sideways when he realizes Jaden is not the big shot he appeared to be.

Slowly, control of the situation starts to slip further away from Chris’ hands as little details throw him off the path of what he’s trying to carry out. First he can’t get Jaden to go in the trunk of the car, and then, after putting a bag over Jaden’s head, he can’t get him to stay down in the backseat. A police officer then notices them as they’re passing by, and a chase ensues. The pursuit ends when Chris’ car stalls in the middle of a field in a rural landscape.

Using Jaden as a hostage, Chris begins a standoff with the police. After letting the police know that he is armed, he demands they move back to a distance. Back in the car, he reveals in part the purpose of his actions: what he had intended to achieve was to get to Billy Bauer, CEO of Smithereen, played by Topher Grace (That 70’s Show, BlacKkKlansman). Chris lets Jaden know that he wants to speak on the phone with Bauer, and together they manage to get Smithereen’s top brass in America on the phone.

Chris threatens to kill Jaden unless they put Bauer on the line, but they stall. Not just for liability reasons, but also because logistics get in the way: Bauer is away on a ten-day solitary retreat. Meanwhile, police presence at the scene increases to include a special unit and a crisis negotiator. They seal off the area as curious civilians look on from outside the perimeter.

Intensely and dramatically, the plot unfolds in a way that eventually gets Chris on the phone with the tech mogul, whose solitary retreat in a remote location in Utah has now been disrupted. What follows is a true state-of-the-culture moment: a cell phone conversation between king and pawn.

Chris just wants to unload the guilt he has been carrying around for three years: back in 2015, he was glued to social media, and one night while driving home with his girlfriend, who was asleep in the passenger’s seat, he takes his eyes off the road for a moment to glance at his phone because a notification had lit it up. His distraction and an oncoming drunk driver caused an accident that killed his girlfriend. But the other driver was blamed for the accident, and Chris never found the courage to confess that he too was partly at fault.

He unloads the guilt and takes responsibility for his actions, but he also lets Bauer know that he created a monster. But Bauer already knows, and admits to impotence to affect change: the thing has a life of its own now, and he can’t rein it in anymore. Chris then cuts Bauer off, to let him know that all he wanted to do was to say his piece. And now that he has, he’s going to kill himself, as Bauer pleads with him not to do so.

Take a moment to notice the insane logistical power at our fingertips’ disposal, its invasive capacity, and the miraculous shortening of distance it can achieve: within a couple of hours, an average man finds a way to, from another continent, intrude into another man’s solitary seclusion, and impose on him a conversation.

And yet, all the participants orbiting the events, and conjecturing from the outside of that conversation (the local police, the FBI, news coverage, onlookers at the scene feeding social media with amateur live reports, the Smithereen team of higher-ups doing crisis management from Silicon Valley), none of them have a clue of how simple, and how stripped down to bare human need for meaning, is the back and forth between those two.

The obvious parallels between the fictional entities in this episode and real world ones (Hitcher and Uber, Smithereen and Twitter, Persona and Facebook, Billy Bauer and Jack Dorsey) will undoubtedly have some people looking at Smithereens as a sociopolitical essay of some kind: criticism aimed at media and tech conglomerates gone astray, or commentary on widespread addiction to social media.

But perhaps the more pertinent angle to look at it from is the small-scale view of things: perhaps it is just a tale of one individual trying to stay whole as an information tsunami descends upon us.

If anything, Smithereens tells us that we are still here. Charlie Brooker, the show’s creator and brilliant writer, could have told a story of extortion, or one of ideological agenda, or one of religious fanaticism, but instead he went for centuries-old nontransferable anguish. Perhaps that choice is an indication of something. Perhaps it’s a reminder that, regardless of how sophisticated the technology is, the avatars are not who we are: we are the ghosts in the avatars.

An ironic (albeit not shocking) thing happens early in the second act of Smithereens: from Silicon Valley, and in a matter of minutes, a Smithereen techie is able to know more about Chris than law enforcement at the scene of the standoff, by accessing his social media presence and online public records.

All this speed, all this access to information, all this processing power: yes, it breaks down walls, it levels the knowledge playing field, but where does it stop? For now at least, it seems to stop at the door of private conscience. And that may just be the ultimate final frontier.

The ending of the episode is ambiguous. After he hangs up on Bauer, Chris tells Jaden he is free to go, but Jaden too tries to dissuade Chris of killing himself, and moments later, as they both grapple over the gun, a sniper is given the go-ahead to shoot. The outcome of the shot, however, is not revealed.

Brooker seems less interested in a resolution than he is in painting the cultural background: the contrast of how inner turmoil and heartbreak, once filtered through the lens of social media, can quickly be reduced to disposable updates on personal devices: mere ephemeral confetti, as Brooker put it in an interview to Entertainment Weekly about the episode’s ending.

But even though that ending is not cheerful or uplifting, strangely, it feels somewhat comforting. A comfort courtesy of Smithereens’ unspoken suggestion that, for all the mesmerizing fanfare of the bright city lights, the realest game in town is still the game of life, the one played eye to eye, the one of casual joy and unavoidable pain, the one of deep intrinsic meaning. It’s been here with us since prehistoric times, never in need of an update, just rediscovery.