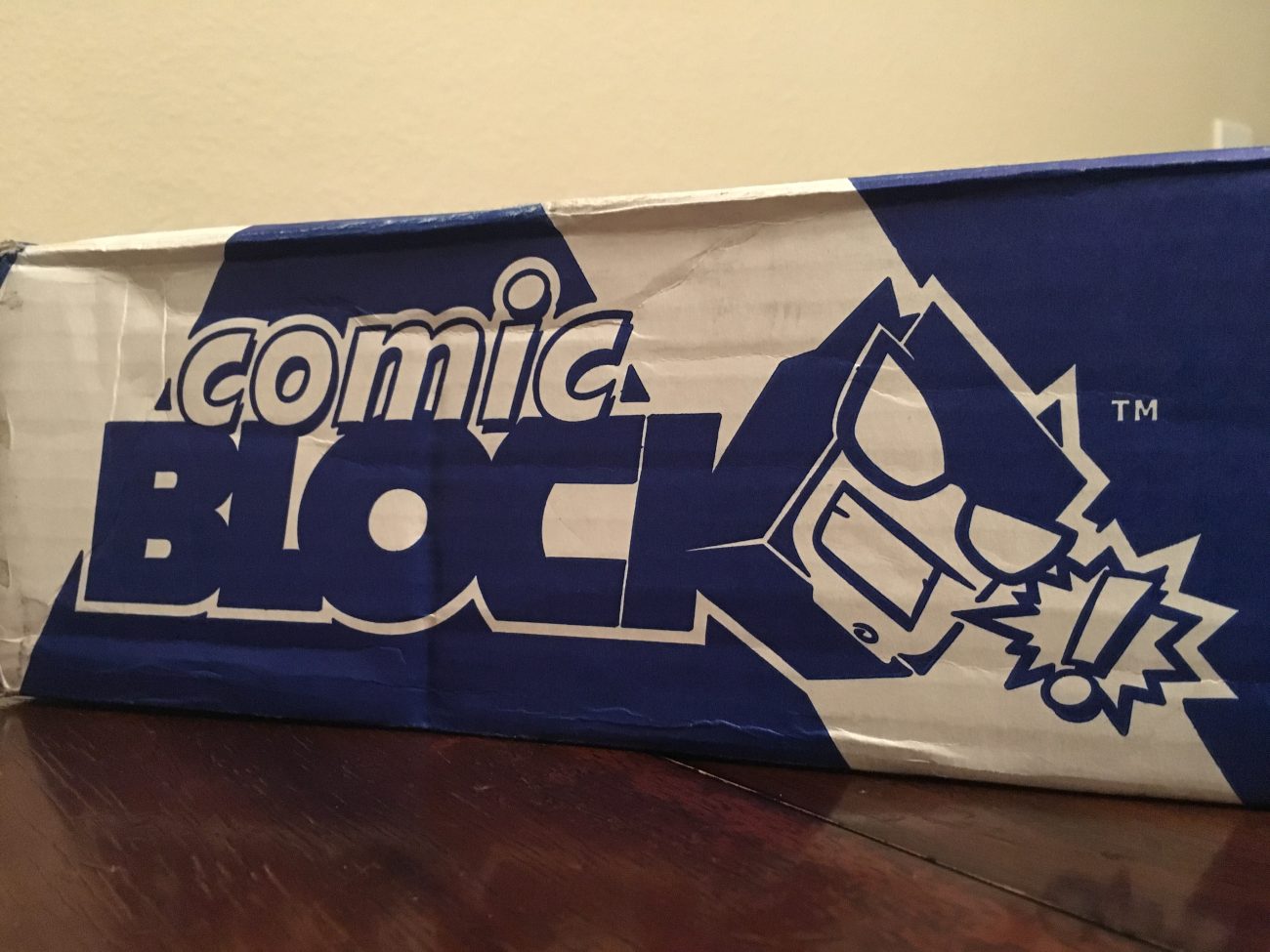 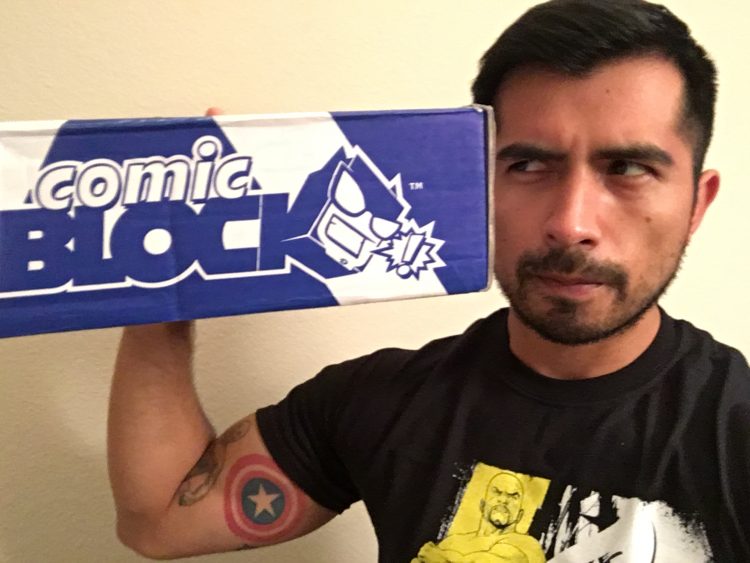 September’s edition of Comic Block brings to your doorstep some items hot off the heels of this month’s debuts. From the hard-hitting adventures of Luke Cage on Netflix to the 2nd season premiere of Supergirl, Comic Block’s monthly box keeps riding the wave of current pop culture events.

Keep the Streets Clean with this ‘Luke Cage’ Tee 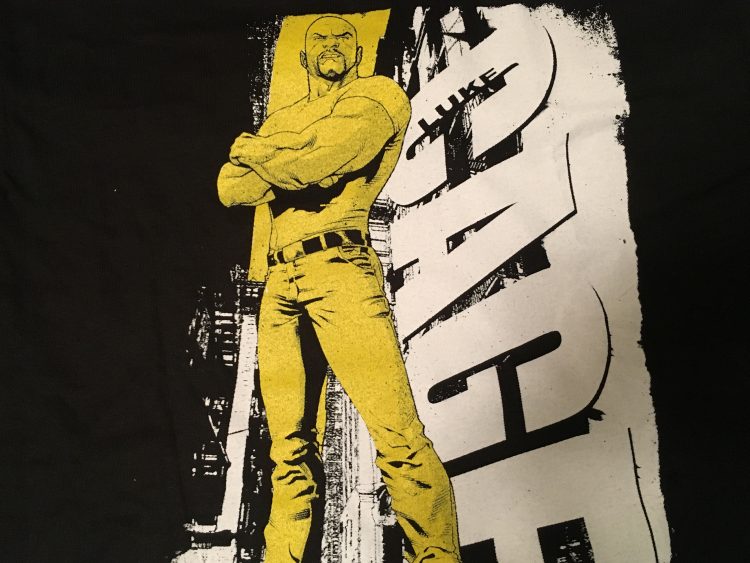 If you’re not aware of the more mature Marvel superhero Netflix dramas, then welcome to the new age of superhero television. After successful grungy seasons with Daredevil and Jessica Jones, Luke Cage takes control of the screen with his own retro inspired crime drama.

Reminiscent of Shaq-era statuesque, Cage sits highlighted in yellow affront a white and black backdrop, almost hinting at the world that he in which he resides, defines, and defends. What better way to celebrate the bone cracking, smooth tunes of Luke Cage than enjoying it with this one of a kind tee. With awesome exclusive shirts like these in stock, Comic Block provides a $10 card if you’d like to power up your closet.

The World According to Wolverine & Superhero Laces 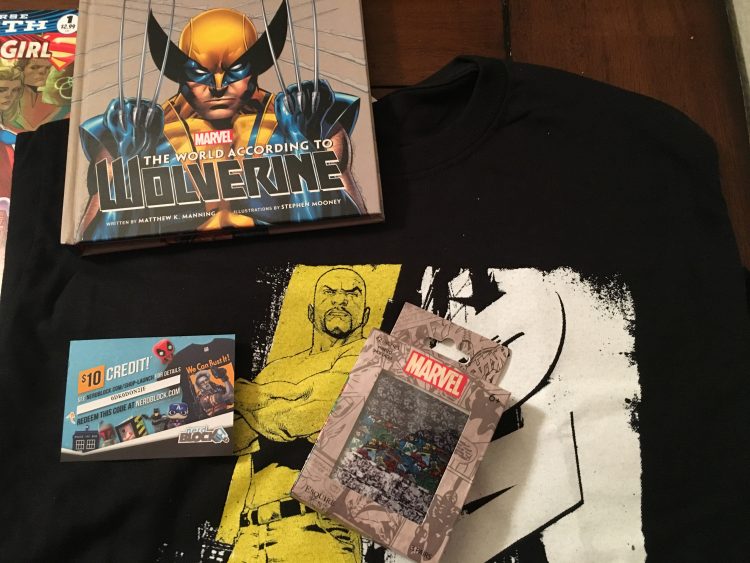 Perhaps the most surprisingly enjoyable treat within this box is a small hardback book illustrating the history of Wolverine as told by the clawed mutant himself. In what is supposed to be a scrapbooking adventure made by Logan, writer Matthew K. Manning delves deep in the psyche of Wolverine as he leaves a personal and instructional manual to living life as an X-Man, Avenger, Mutant, but most importantly, a hero.

The illustrations are nice and the attempts at realism are ambitious, but the book itself is an ongoing reminder of why we are centered on Wolverine. Whether you want to revisit some of his highs and lows, or give a non-Marvel enthusiast a beginner guide to Wolverine, this addition to your bookshelf showcases your love for a fan-favorite.

Superhero laces? Enough said. They’re cool in the “we need something else to throw in this box” kind of way. 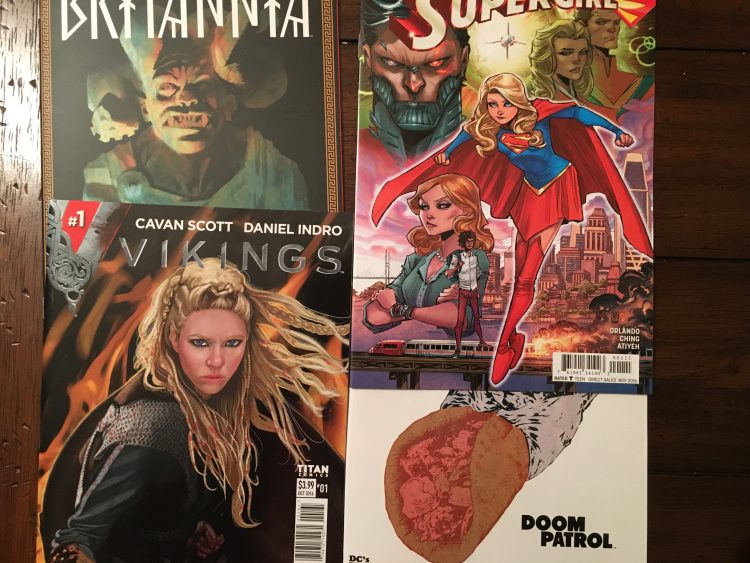 To correlate with the 2nd season return of Supergirl, Comic Block includes the premier issue of Supergirl in the DC Universe Rebirth. As enjoyable as it is, artist Brian Ching’s work was the highlight of these issues and states his claim as among the future impressionable illustrators to keep your eye on.

Also included is Doom Patrol #1, whose frantic style makes it easy to skim and not invest, and Vikings #1, which offers bloody gore. There is also the debut of Britannia, which gives an interesting concept of a decorated Legionnaire turned investigator. With illustrations that are reminiscent of early McFarlan days and an intriguing story, this comic is sure to grab the alternative graphic novel fan base. Do any of these issues merit buying a second? I’ll let you be the judge, but in this case for me, I’m glad that these were included as a bonus but like a high school relationship, I’m just not committed. 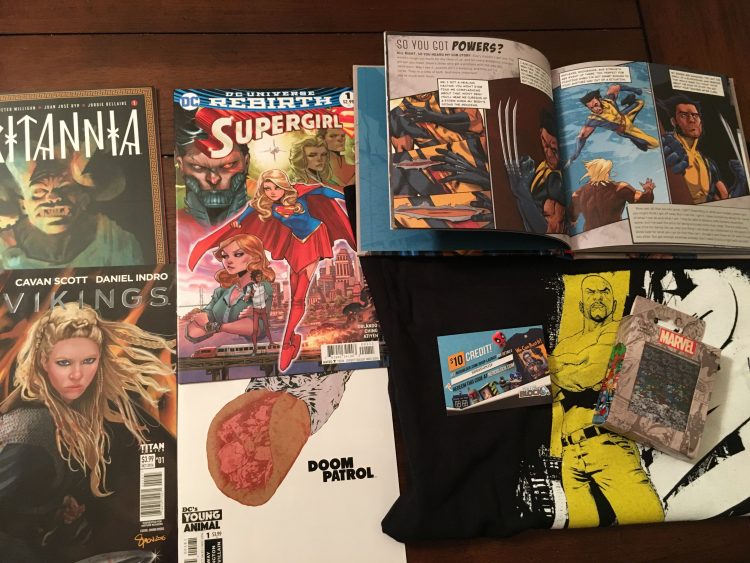 Comic Block is a joy to receive regardless of whether or not all the contents induce excitement. While last month’s box did have some relativity between the Guardians of the Galaxy and Suicide Squad merch, this month’s edition lacked an overall theme. Maybe it was there, but I wasn’t clever enough to piece them together other than the corresponding shows that aired. However, next month’s box is sure to be a treat as it offers something from Dr. Strange, and maybe something else that bodes Spawn or Constantine.

The (Other) iTunes 99 Cent Movie of the Week: ‘Hello, My Name Is Doris’