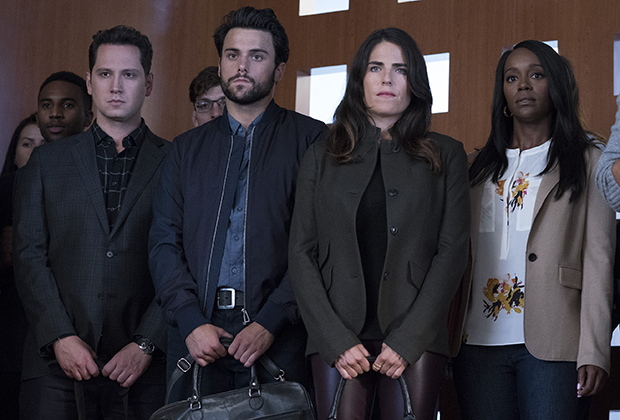 How to Get Away with Murder Season 5, Episode 1: “Your Funeral”

Annalise Keating is one of the most fascinating characters on television, and not just because Viola Davis is a tour de force (although that’s a huge part of it). Over the last four seasons, we’ve seen her at her best, her worst, and everything in between. She can make us jump up and cheer, and then she can turn right around and make us scream obscenities at the TV. It’s complicated, to say the least.

She’s not your typical heroine. She lies when it’s convenient. She plays fast and loose with legal ethics. And she’s not above either planting or burying evidence as needed to win a case. And she has a really bad habit of saying incredibly hurtful things to the people she loves when she’s angry–whether she means them at the time or not.

But she’s not your typical anti-heroine, either. She genuinely cares about her students and the other people in her inner circle (well, most of them). She sacrificed a great deal last season in her efforts to reform the criminal justice system, taking her case all the way to the Supreme Court (and winning!) despite the governor’s efforts to stop her. And little Christopher Castillo wouldn’t be alive if she hadn’t dragged him out of that elevator and performed CPR right after he was born prematurely.

But, if I had to choose, I’d say that, while she does care about people, and while she means well most of the time, she has one thing in common with Tony Soprano and Walter White that tips the scales in the “antiheroine” direction: she tends to ruin (or at least damage) the lives of the people she comes in contact with. If you spend enough time with Annalise, there’s a really good chance you’ll end up either committing, covering up, or being the victim of a murder (or maybe all three). She’s also been at least partially responsible for a recovering addict’s relapse and subsequent overdose. So, for all the good she does (which is a lot), and despite her best intentions, she leaves a trail of broken bodies (both figuratively and literally) wherever she goes.

Having said all that, it looks like Annalise and the gang are actually in pretty good shape as we reconnect with them in the season five premiere. Hot off her Supreme Court win, Annalise is finally back in the classroom as she conducts a legal clinic in advanced trial skills. She’s also being courted by multiple law firms in Philadelphia, including Caplan & Gold. What she’d really like to do is join a small all-women’s firm that would allow her to bring in her own team, including Bonnie (more on her in a minute). Unfortunately, the governor isn’t quite over the way Annalise went around him to win her class action, so his office has poisoned the waters with every firm she’s interviewed with. Ultimately, she convinces Caplan’s senior partner (played by new cast member Timothy Hutton) to take a chance, hire her over the governor’s protests, and fund her legal clinic. Apparently Teegan Price isn’t too happy about it, and I’m sure we’ll see more fireworks between those two in the weeks to come.

As for the Keating Five (yes, I know only four of the original five are still around, but I’m throwing Oliver into the mix), almost everyone is moving in a positive direction. Connor is back in school, and he, along with Michaela and Laurel, have been accepted into Professor Keating’s ultra-competitive law clinic. And the three of them are moving into a new house with Oliver. The lone exception is Asher, who not only has to get over losing Michaela, but also has to deal with the fact that he didn’t make the cut for the clinic. Asher has gone from being the most annoying character on the show to one of my favorites, and I really hope things start going his way soon. The only thing he can take comfort in is the fact that Marcus isn’t interested in Michaela right now, so that’s a bit of karmic justice.

Frank and Laurel have been in what amounts to a nanny-with-benefits relationship. But, now that Laurel’s talking about she and Christopher moving out, he decides to propose. “I said marry me, dammit!” isn’t the most romantic phrase I’ve ever heard. But it’s exactly what you’d expect from Frank, and somehow that makes sense.

Bonnie’s still at the D.A.’s office, and things are starting to heat up with interim D.A. Ronald Miller. She says she’s just using him to get the files that Denver was keeping on all of them, and, knowing Bonnie, that’s probably true. Bonnie deserves some happiness after all she’s been through, and maybe this is the start of something good for her. She’s not quite ready to go back to work for Annalise (although I fully expect that to happen eventually). They don’t exactly have a healthy relationship, but they need each other nonetheless. Of course, almost every relationship on this show is complicated, which is part of the fun.