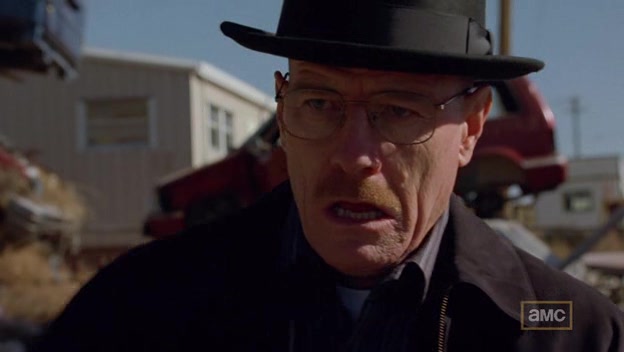 The last half of season 5 of Breaking Bad is approaching, a high-octane finale which promises to be what show-runner Vince Gilligan had envisioned from the start. Over the past few years, the brain behind Breaking Bad has done a fantastic job of showing Walter White’s slow descent into hardened criminality, until he is unrecognizable from his season one persona.

The opening to season five was a flash-forward, and as ominous as they get. Walter, a year on from whatever transpires this season, is buying some heavy artillery in a diner from Mr. Elsworth from Deadwood. The question on everyone’s mind is “will he win?” I think this shows the level of misunderstanding among some of the shows fans. The question we should be asking is, “does he deserve to win?”

The common misconception is that we should be rooting for Walter because he is the protagonist. Yet incrementally, his choices have led him down a murky path. In season one, Walter kills his first man, but we empathize with his lack of choice. At the climax of the first half of season five, he shoots Mike for no other reason than stupid, filthy pride. Is this a man we should be supporting? He is the face of the show but is he still the hero?

Beyond the personal drama we shouldn’t forget he is a cook and distributor of crystal meth. The show is pretty watertight, but lacks a consistent display of the devastating effects of the drug (beyond the wacky characters in Jesse’s life). We are so caught up in Walter’s individual strife that we forget to look at the bigger picture of his career choice.

I think the clearest example of how Gilligan has shuffled the deck of perceptions and misdirected the audience is with Skyler. Perhaps you’ve read the Breaking Bad sub-reddit, or comments or related articles. Skyler-hate is at an all-time high (Google’s third suggestion is “annoying”). She has been framed, by the audience not the writers, as a “nagging-wife” character, one that sits at home, grinding her teeth, while Jesse and Walter have wacky adventures.

That was in season one. Season five Skyler is a different animal. She is an incredibly capable part of the business, despite having been emotionally tortured by her own husband for years. Her own son hated her for distrusting Walter, and the sheer agony of not being able to tell him why is too much. Now she is depressed, willing to do anything to save her children.

The internet lacks the empathy to deal with Skyler’s predicament, perhaps only seeing a sad, pouting woman. But consider her motivations and you might start to see what a monster Walter truly is. She is the collateral damage of the business, and no amount of fun Walter may have with magnets and train-heists can change that.

So do I want Walter to win? Let’s put it this way: I hope he gets what he deserves.